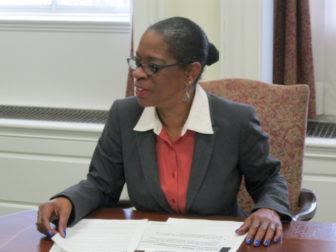 State Treasurer Denise L. Nappier threatened last year to warn Connecticut bond investors about legal problems that still leave the state’s pension system at risk of losing its federal tax-exempt status, according to a letter obtained this week by The Mirror.

And though she ultimately determined disclosure was not required, Nappier said this week that it’s still essential that the State Employees Retirement Commission bring the pension program into compliance with federal and state rules.

At issue are claims the state has issued pensions to some retirees in excess of an annual cap set by the federal Internal Revenue Code.

“At this point I must give serious consideration to disclosure of the state of Connecticut’s exposure arising from this issue in the state’s Official Statement,” Nappier wrote in March 2014 to then-retirement commission Chairman Peter R. Blum of West Hartford.

The official statement is a legal declaration that effectively serves as the prospectus when the state issues bonds to finance various capital projects. It is a disclosure of all significant financial issues pertinent to the bond issuance, prepared in consultation with specialized disclosure counsel.

“Until this issue is fully assessed and addressed, eliminating any threat to the tax-exempt status of the pension funds,” the treasurer added in her letter to Blum, “I will not rest easily.”

Among the tax advantages that go along with the state’s pension plans are that employer contributions are tax-exempt.

Blum could not be reached for comment Thursday afternoon.

The “exposure” Nappier was referring to was one of the issues highlighted last month in a lawsuit filed by Virginia Brown. An attorney in the comptroller’s office assigned to retirement services from September 2012 through November 2014, Brown filed a “whistleblower” complaint with the auditors two years ago.

Brown charged the state failed to apply the federal dollar limit on maximum benefits per year for some retirees, in violation of the federal Internal Revenue Code.

Comptroller Kevin P. Lembo, whose office administers pensions on behalf of the commission, said the problem predates his tenure, which began in January 2011.

The commission attempted to resolve the issue of payments in excess of the federal cap in 2012 when it retained Ice Miller LLP, an Indianapolis-based law firm specializing in government pension plans.

The firm recommended that the retirement commission make a voluntary correction filing and notify the IRS that the state had paid some state retirees benefits in excess of annual federal limits. Ice Miller terminated its relationship with the state in October 2013, though, and Brown charged it was because the commission was not prepared to file any correction.

In her March 2014 letter to Blum, Nappier wrote that Ice Miller’s resignation “raises concerns about the commission’s commitment to fully addressing this matter.”

The treasurer wrote Thursday in response to questions from The Mirror that Blum had cited “unspecified personality conflicts between one or more commission members and Ice Miller.”

A representative of Ice Miller did not comment Thursday afternoon.

The treasurer is allowed one non-voting representative on the retirement commission. Her office does not administer pension benefits, but is responsible for the investment of state pension funds. And risking IRS penalties and federal tax-exempt status of pension payments “is simply unacceptable,” she wrote to Blum.

Nappier told The Mirror this week that, while she determined after consulting with counsel that this risk “was not material to bondholders and did not require disclosure to bondholders,” she remains very concerned.

“I would hope that all members of the State Employees Retirement Commission encourage expeditious completion of all tasks necessary to achieve complete compliance with the code and any other relevant law or regulation,” she wrote.

Brown and state Auditors Robert M. Ward and John C. Geragosian also raised a second problem with the pension system, involving disability pay. But this issue does not affect the pension’s compliance with federal tax law and was not the focus of Nappier’s letter.

The auditors — in a special report last month — and Brown assert that millions of dollars in disability pension benefits are likely to have been improperly awarded, dating back at least to 2012.

Under both the principal retirement program for state employees and a municipal workers plan administered by the comptroller’s office, disabled workers are supposed to undergo a medical review within 24 months after receiving disability benefits.

They cannot continue to receive disability benefits after 24 months, according to the auditors, if a team of state-appointed doctors determines they could return to their own job, or to a “suitable and comparable” position.

The auditors and Brown assert that for much of the past three years, the state has employed the more lenient threshold. Workers have been allowed to maintain disability pay as long as their injury prevented them from returning only to their original job.

Lembo said there are differing interpretations between the state and employee unions over the “suitable and comparable” standard, and that he has been urging negotiators for both sides to address this since he took office.

The state suspended the 24-month reviews briefly in late 2012, and then from October 2014 through the present, as it tried to solve the controversy. This means that all disabled retirees continue to receive benefits, even after 24 months, with no medical review.