CT businesses pushing back on shutdown of Ex-Im Bank 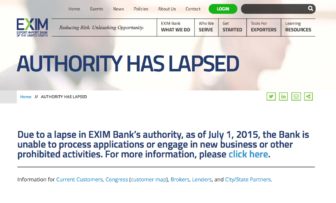 Visitors to the Export-Import Bank homepage get a message saying the bank cannot engage in any new business.

Washington –The Tea Party, aided by other conservative Republicans and the billionaire Koch brothers, celebrated a big victory last week when Congress failed to reauthorize the charter of a bank that helps U.S. businesses, including Connecticut-based General Electric and United Technologies, make sales overseas.

But supporters of the Export-Import Bank, including Connecticut’s all Democratic congressional delegation, have vowed to fight back this week.

The bank’s charter expired on June 30, the same day Rep. Rosa DeLauro, D-3rd District, visited APS Technology in Wallingford, a company that says it was helped by the Ex-Im Bank. DeLauro blasted GOP leaders for not scheduling a vote on the bank’s reauthorization and allowing the bank’s charter to quietly expire at the stroke of midnight.

“They must stop the irresponsible games and allow us a vote,” DeLauro said.

The Export-Import Bank was created by former President Franklin Delano Roosevelt in 1934 to close financing gaps in sales of U.S. goods to buyers overseas when private lenders are unable or unwilling to take on the financial risk.

During a recent visit to Click Bond Inc., a manufacturer of fastening hardware and adhesive bonding processes in Waterbury, Rep. Elizabeth Esty, D-5th District, said the Export-Import Bank operates at no cost to taxpayers and has supported nearly 20,000 jobs in Connecticut by backing about $4 billion in exports from the state.

“Manufacturing is the backbone of Connecticut’s economy and suppliers such as Click Bond depend on partnerships with U.S.-based manufacturers that export many of their products with Ex-Im’s backing,” Esty said.

Click Bond’s largest civil aviation customer is Boeing, a company that is considered the biggest beneficiary of the Export Import Bank. The bank is derided as “the bank of Boeing” by its critics, including Delta Airlines, because it helps foreign airlines purchase Boeing planes.

Chartered as a government corporation by Congress, the bank helps American companies in several ways. Its aim is to boost exports by providing foreign purchasers of U.S. goods with low-interest loans.

The bank has the ability to make direct loans, but usually guarantees low interest commercial loans to the foreign customers of U.S. companies.

Since 2007, the bank has helped 111 Connecticut companies.

Bank supporters, which include some of the largest companies in Connecticut, including Sikorsky Aircraft and General Electric, say it helps them remain competitive against foreign companies that are aided by their governments.

Koch brothers back a revolt

A GE spokeswoman called reauthorizing the bank a “win-win” scenario that’s good for business and taxpayers.

But a revolt by the Tea Party wing of the House GOP, joined by other conservatives like Rep. Jeb Hensarling of Texas, chairman of the House Financial Services Committee with jurisdiction over the bank, said it exemplifies a kind of “crony capitalism” in which government assistance goes disproportionately to large corporations like Boeing and General Electric that don’t need federal help.

Americans for Prosperity and other conservative groups financed by Charles and David Koch, made opposition to the bank a conservative litmus test.

Congress has reauthorized the bank’s charter 16 times with little fanfare. But  it’s become a flashpoint for conservative Republicans, silencing the voices of many mainstream and Main Street Republicans. So now congressional Democrats like DeLauro and Esty, are allied with the nation’s businesses in the fight to reauthorize the bank.

Senate Majority Leader Mitch McConnell, R-Ky. is expected to try to attach reauthorization of the Ex-Im Bank to a must-pass transportation bill. But it would need to survive an attempt by conservative House Republicans to strip it from that package.

While the bank’s employees are servicing existing loans and financial products, no new loans or guarantees can be issued unless the bank’s charter is renewed.

“By allowing the Ex-Im Bank to lapse, Congress has unilaterally disarmed U.S. manufacturers and exporters and allowed their overseas competitors to thrive,” said the Exporters for Ex-Im Coalition, a group that includes GE, Sikorsky Aircraft and Fuel Cell Energy among its many corporate members.

The coalition said that without the bank, many U.S. companies will lose work and many U.S. workers could eventually lose their jobs.

“The private banking sector has made it clear that they will not step in to fill this void. Voters sent lawmakers to Washington to lead our nation to greater prosperity and global leadership, not to undermine manufacturers and job creators,” the coalition said.

Supporters of the bank say foreign companies competing with US firms are backed by their own national versions of the Ex-Im, meaning that the bank’s demise could cause foreign buyers to turn their backs on US businesses, leading to fewer sales and fewer employment opportunities.

“You will see layoffs, you will see lost business — and we are already seeing foreign governments and foreign companies start taking advantage of the uncertainty,” Hochberg said.

General Electric has said it’s in danger of losing a $350-million deal to build locomotives for Angola if the bank’s charter is not reauthorized soon.

GE CEO Jeff Immelt, who threatened to move company headquarters out of Connecticut because of proposed hikes in state taxes affecting business, said he would move entire operations out of the United States if Congress fails to act.

“We are not going to lose this business,” he said in a June 17 speech to the Economic Club. “We will build these products in places where export credit financing is available because we have to. What happens then? Good jobs in the U.S. will become good jobs in Canada and Europe. That’s a mighty high price to pay for ideological purity, and it doesn’t fit my idea of a national strategy for growth and jobs.”