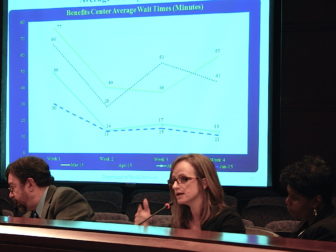 Melissa Garvin details a drop in average phone wait times at the Department of Social Services.

Wait times for callers to reach a worker at the state Department of Social Services fell dramatically in June after changes meant to improve how the agency handles calls.

On average, people calling the social service agency waited 17 minutes on hold to reach a worker — down from 87 minutes last July.

“Although we’re not quite where we wish to be, no doubt you will be pleased to learn of some of the positive results we’re currently experiencing in our benefits centers today due to the enhancements and adjustments we’ve made,” Director of Field Operations Marva Perrin told members of the council that oversees the Medicaid program Friday.

Council members, who have been critical of the difficulty poor state residents face when trying to reach someone at DSS, praised the improved performance, but questioned whether it was sustainable and pressed department officials for what an ideal wait-time would be.

Perrin said officials are still trying to determine targets for two key metrics – how long it takes callers to reach a worker and what percentage of callers hang up before their call is answered.

DSS’s system for handling clients’ calls has been under scrutiny since soon after it was implemented two years ago as a way to improve service. The old system relied on each client reaching a specific worker, who kept their case information in paper files. Workers’ voice mailboxes were often full as they juggled large caseloads.

Under the new system, all documents are scanned into a computer system that workers at any DSS office in the state can access, and clients trying to reach a worker call a single phone number that – in theory – could connect them to the next available DSS worker in one of the department’s three benefits centers. The new system also includes systems designed to allow clients to get information about their cases online or through an automated phone system, or submit information online.

But the wait times to reach a worker by phone have been lengthy. Last August, for example, it took an average of 78 minutes on hold to reach a worker, and 71 percent of callers who wanted to speak to a representative hung up before their call was answered.

While advocates pushed for the department to hire more staff, agency officials maintained that they could improve things by revising how work gets handled.

The department made several changes in May, including changing how work stemming from phone calls is handled. Initially, the workers who answered the phone would process any information on the client’s case after the call, meaning that for a time, they weren’t available to answer the next call. Now, during peak call times, staff who answer the phone forward some processing tasks to workers in other parts of the agency, allowing them to spend more time answering calls.

In addition, new workers who in the past started out answering phones now start out working with clients who come to the offices in person. Perrin said that when the new workers were answering the phones, they would sometimes require help from other benefits center workers, who would have to come off the phones to help. Now the new workers don’t move to the phones until they have more experience and are better able to handle calls by themselves.

Officials also tried to streamline the tasks workers must do to process cases, said Melissa Garvin, the department’s director of tactical planning.

In May, the average wait time to reach a worker dropped to 23 minutes, and in June, it fell to 17 minutes. The percentage of callers who hung up while on hold dropped from 57 percent in March to 31 percent in June.

But she added that officials are trying to make other improvements, including developing standardized call scripts for all workers, which has been shown to reduce time on the phone, and making plans for customer service training for workers who answer the phone.

Ellen Andrews, executive director of the Connecticut Health Policy Project, called the new call statistics encouraging, but asked how the department would ensure they can be sustained.

Perrin noted that as more calls are answered and clients have their issues resolved, there should be fewer calls. “The more we do, the less the need will be to actually call us,” she said. “So we hope that this trend continues.”

And Garvin said officials monitor how much processing is transferred from the call centers to workers in other departments, to avoid that shift slowing down the other work those employees are doing.

Sheldon Toubman, an attorney with the New Haven Legal Assistance Association who has argued that DSS needs more workers, said he was pleased to see the agency moving in the right direction.

“An abandonment rate of 31 percent is still too high, but we have to acknowledge major improvement,” he said.

Rep. Catherine Abercrombie, D-Meriden, raised another question: How will the department handle what could be an increase in requests for assistance once a major change in Medicaid eligibility occurs later this year?

Marc Shok, DSS director of eligibility policy and economic security, said the agency will have scripts and information in place for both DSS staff and those at Access Health CT, the state’s health insurance exchange, where those losing coverage could purchase subsidized insurance.

Although the coverage change is effective Aug. 1 under state law, Shok said the department won’t have enough time to get notices to those slated to lose coverage who don’t qualify for the additional 12 months, so they will not lose coverage until Sept. 1.