Need to reach a DSS worker? Can you hold for 78 minutes? 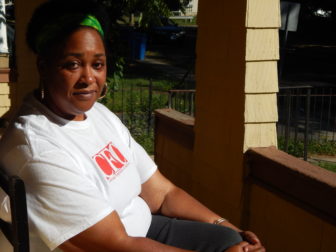 Angela Lewis-Shakes learned when she went to a dental appointment last week that her Medicaid coverage had been cut off.

She knew she’d have to call the state Department of Social Services to straighten out her coverage. But she dreaded it.

Last month, it took an average wait of one hour and 18 minutes on hold to reach a DSS worker in the agency’s call centers. Seventy-one percent of callers who wanted to speak to a worker hung up before their calls were answered.

“No one has that kind of time,” said Lewis-Shakes, who lives in Hartford and is one of nearly 900,000 Connecticut residents who rely on DSS for medical coverage, food stamps or other assistance.

More than a year after DSS launched the new call centers as part of a broad “modernization” effort, people who use the system say reaching a worker remains unacceptably difficult. The long wait times are especially problematic, DSS clients and advocates say, because many poor people rely on cellphones with limited minutes that can quickly get sapped if they need to call the department.

Social Services Commissioner Roderick L. Bremby acknowledged that the phone wait times are too long, but described the call centers as the one area of concern in a new system that’s otherwise working “extremely well.”

DSS clients, local human service workers and legal aid attorneys take a less rosy view of the rest of the new system, which includes digitized paperwork and the ability to view some case information online. Still, some — but not all — say many of the worst problems that plagued the system’s launch last summer appear to have lessened in recent months, including the mistaken cutoff of benefits or notifications that aid recipients would be cut off even if they still qualified.

But some are wary of what’s to come. For most of this year, most people in Medicaid were not required to renew their coverage, a process that in the past led to people’s losing benefits wrongly. Some client advocates worry about what will happen now that the state has resumed periodically re-determining Medicaid eligibility.

Meanwhile, officials at some hospitals are concerned that vulnerable patients will fall through the cracks because DSS has discontinued its practice of having eligibility workers stationed in hospitals to help expedite Medicaid applications for patients.

The new system was intended to make things easier and more efficient.

To get help in the past, clients had to track down their specific case worker, who often had a huge caseload, a full voice mailbox and little time to answer phones. Now clients have no specific caseworkers. Instead, they have one phone number to call: 1-855-626-6632.

That gets them to one of three “benefits centers,” where DSS workers can access their files electronically. The new phone system also allows people to get answers to some questions through an automated system, without having to speak to a worker, and about 40 percent of callers used that function last month.

But thousands of people still want help from a worker, and face long waits. Last month, 102,619 calls were directed to the workers in the benefits centers. Of those, 29,965 were answered.

Callers often hear a message that the wait time is 60 minutes. But after waiting an hour, they get the same message again, said Abigail Egan, Plymouth’s human services director. “That’s very frustrating for folks,” she said.

Many people have asked the department to use a system that would take callers’ phone numbers during busy times and call them back when a worker is available. But that’s unlikely to happen soon. Bremby said the department had a vendor explore adding an “outcall” feature. While it’s doable, Bremby said, the vendor didn’t think it would meaningfully reduce wait times.

Instead, the department plans to have a different firm more thoroughly review the structure of the benefits centers next month to determine how they can be improved. One change, Bremby indicated, might be to have the workers in the benefits centers responsible for fewer functions.

Rep. Betsy Ritter, who co-chairs the council that oversees Medicaid, signaled Friday that she was losing patience with hearing repeatedly from the department that the issues were being addressed. She said she constantly hears from people in Southeastern Connecticut about the wait times, and described one person holding up a dead cellphone and explaining that the minutes were exhausted by spending too much time on hold with DSS.

“I’m real frustrated with it,” Ritter, D-Waterford, said. “Nothing compared to the [people] that I’ve been talking to, I’m sure, because it’s their benefits.”

More staff or a better system?

In the past four months of calling DSS, the shortest Woodstock attorney Michele Palulis has had to wait was 90 minutes. And to her, that’s an improvement. When the system first launched, she once waited on hold for close to six hours.

Although Palulis can check some things about clients’ cases online, she said there isn’t enough detail to be useful. So she calls, often with issues that can be addressed quickly once she finally reaches a person.

“I think the concept would work wonderfully if they had enough staff to implement,” Palulis said.

DSS staffing levels have been a major source of contention between the department and client advocates.

The benefits centers have a capacity of 155 workers. Bremby said the actual number working at a given time varies widely. Last month, the phone system took 102,619 phone calls from people who wanted to speak to a worker — an average of 662 calls per worker if the staffing were at maximum capacity.

The average time callers spend talking with workers has ranged from 7.37 to 8.4 minutes since February, the first month for which DSS has provided detailed data. But workers often have to do additional work after a phone call to process the case, and the time spent doing that rose this summer. It averaged 11.3 minutes in February, 9.1 minutes in May, and 14.12 minutes last month.

Asked about additional staffing last week, Bremby said he didn’t think it was the solution “in and of itself.” If the analysis of the benefits centers determines that more people will help achieve the goals, officials will consider it, he said.

“Putting more people on a problem doesn’t necessarily translate into solving the problem any quicker or better,” he said.

A federal class action lawsuit against DSS blamed understaffing for delays in processing Medicaid applications. A settlement in the case is pending and would require DSS to meet certain timeliness standards for processing Medicaid applications. Lawmakers this year budgeted funds for added staff, although when asked last week about additional hires because of the lawsuit last week, Bremby would only say that the department is implementing the plan to achieve the outcomes required in the settlement.

George Chamberlin, who runs the benefits centers, said the call statistics could be skewed because a small number of people call many times. If someone needs benefits or has other issues, a person might call repeatedly, even hundreds of times, he said.

Egan and others say one way to reduce reliance on the phone system would be to make it possible for people to submit information — such as address changes — online. Bremby said that’s expected to be added late next month.

Lewis-Shakes is among those who’s had to call DSS to address issues. She serves as co-chairwoman of the Caring Families Coalition, and helps other people address benefits issues too. She said people sometimes wait more than an hour to talk to a DSS worker, only to get inaccurate information when they do.

“It really is discouraging,” she said. “Me, who knows the system, if it’s discouraging for me, someone who doesn’t, can you imagine?”

Lewis-Shakes, who is on disability, said the concept behind the new system is a good one, but the way it’s running needs fixes. She thought the old system, of having to try to reach a specific worker, was bad.

“But at least every once in a while, if I kept it up, I knew if I kept it up for two weeks straight, I would get through,” she said. “But with this system, this is even crazier…Everyone’s time is valuable.”