Ojakian to leave as Malloy’s chief of staff 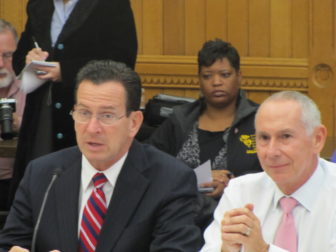 Mark Ojakian, the chief of staff to Gov. Dannel P. Malloy since the second year of the Malloy administration, is stepping down. But he may not be entirely departing: A source close to the governor said Ojakian will remain “a close adviser,” and his name already has surfaced for an interim post.

The Board of Regents for Higher Education is preparing for the eventual departure of its embattled president, Gregory W. Gray, and Ojakian has been identified by education sources as a potential interim successor.

“I will miss working with Mark on a daily basis, but I understand it is time for him to turn the page to a different chapter in his life,” Malloy said in a statement. “Mark has been one of my most trusted friends and advisors.”

Ojakian, 61, a career state employee who led the administration’s first-year concession talks with state employee labor unions, declined to comment on his departure of the possibility of taking over as interim president of the Board of Regent’s system, which includes all of public higher education in Connecticut outside the University of Connecticut.

“It has been an honor to serve Governor Malloy,” he said in a statement distributed by the governor’s office. “He is not only a dedicated, hardworking public servant who has put our state on the path of progress, but he has also been a great friend.”

Ojakian will depart by year’s end, the governor’s office said.

On Jan. 5, 2012, the first anniversary of the governor’s first inaugural, Ojakian succeeded Timothy Bannon as chief, an intense job that requires the ability to be a gubernatorial gate-keeper, sounding board and, in legislative negotiations, a closer.

“Through his efforts, we have been able to make an agreement with labor that allowed the state to cut billions in long-term debt, passed an increase in the minimum wage, implemented paid sick leave, made record investments in transportation, and passed a sweeping reforms to our criminal justice system,” Malloy said.

Ojakian played a role in resolving differences with legislators over the governor’s “Second Chance Society” initiative, which lowered sentences for simple drug possession as part of a larger effort to lower incarceration rates.

Ojakian grew up in West Hartford, graduated from Saint Anselm College in Manchester, N.H., then earned a graduate degree in international relations at American University in Washington, D.C. He was working as a waiter at Carbone’s Restaurant in February 1980 when he was hired by the Office of Legislative Research.

His friendship with Lt. Gov. Nancy Wyman, whom he met early in both their careers, changed his career path. He became a top aide when Wyman was elected state comptroller in 1994 and moved with her to the Malloy administration in 2011.

His first appointment in the Malloy administration was as deputy at the Office of Policy and Management, which is responsible for budgeting and labor relations.

“I probably would not be standing here today had it not been for her friendship and her ability to mentor me over her 16 years as the state comptroller,” Ojakian said when he was named chief of staff at the end of 2011.