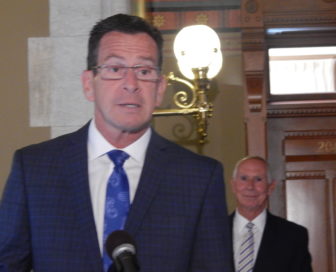 Gov. Malloy at a press conference Monday at which he confirmed he has had discussions with GE aimed at keeping the company’s headquarters in Connecticut.

Gov. Dannel P. Malloy confirmed Monday that he and others in his administration have met with General Electric and proposed some specific assistance to keep its headquarters in Fairfield.

But the governor remained coy about both the details of those talks and whether he expects the major corporation to remain in Connecticut.

“I have had some discussions with GE lately,” said Malloy, who fielded questions from Capitol reporters after announcing his new chief of staff. “They are going through a process with respect to where their headquarters may be. That’s a decision for them to make, but we certainly had those discussions and stand ready to work with them on issues of concern and being competitive with other states.”

Did the administration offer tax incentives or some other type of economic assistance package to GE?

“What we have indicated is a willingness to work with them on – if you want to call it a package you can call it a package – in general, and in some cases, specific terms of what we thought we could do,” the governor said. “… They had us in. We made a presentation.”

The Connecticut Post reported last week that Fairfield First Selectman Michael Tetreau said the administration was preparing an aggressive offer to GE in response to a visit New York Gov. Andrew Cuomo recently made to the company’s Fairfield headquarters.

Also last week, Bloomberg news reported on its website that GE was weighing a possible move of its headquarters to Atlanta.

“We have formed an exploratory team to assess the company’s options to relocate corporate headquarters,” company spokesman Dominic McMullen wrote in a statement. “The team is currently engaged in the process and is taking many factors into consideration.  When there is a final decision on relocation, we will communicate it publicly.”

Malloy said he isn’t surprised by reports that the company is being wooed by officials from other states.

“We would like them to remain in the state,” the governor said. “They have been approached by other states over the years, states that they have larger employee numbers in. We understand it is a competitive situation, as it is with many of our large employers.”

GE was one of several major Connecticut employers that publicly criticized Malloy and the General Assembly after they negotiated a new biennial budget that would have increased state taxes about $1.5 billion across this fiscal year and next combined.

Malloy relented on the deal his administration originally signed off on, and pressed his fellow Democrats in the legislature’s majority to scale back the overall tax hike. A revised two-year plan was enacted in late June that reduced the overall two-year tax hike by just over $175 million, including repeal of a planned tripling of the state tax on data processing services.

State Senate Minority Leader Len Fasano, R-North Haven, said the administration-GE talks are indicative of the poor condition of state government’s finances, and the drag it places on the Connecticut economy.

“The governor obviously couldn’t sit there and talk and say, ‘Trust me, we’re in good shape,'” Fasano said. “This is a telling sign of the trouble the state of Connecticut is in.”

Despite the latest tax hike, the legislature’s nonpartisan Office of Fiscal Analysis already is projecting a $927 million deficit built into the general fund in 2017-18, the first fiscal year after the new biennial budget. And that potential shortfall still assumes Connecticut’s economy will improve considerably between now and then.

Fasano also predicted GE won’t be the last corporation to seek state assistance in the near future to remain in Connecticut. “What’s going to happen,” he asked, “when any other business with more than 250 employees takes a look at this?”