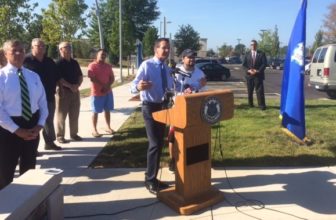 “Some people referred to this system, perhaps, as an albatross around someone’s neck,” Malloy said after taking the three-minute trip to the Flatbush Avenue station on the West Hartford line after boarding at the previous station. “Quite frankly, I think those folks have been surprised at how successful it’s been.”

From the day in 2011 Malloy gave final approval for the $567 million busway — a project conceived during the administration of Gov. John G. Rowland and designed during the tenure of Gov. M. Jodi Rell – the project and Malloy were ridiculed. After the groundbreaking, one critic said the governor had “dug his grave.”

Daily ridership is ahead of the original weekday projections of 11,000, but the state cannot say yet how of many of those riders abandoned local bus routes for a quicker ride on a system built around a nine-mile Hartford-to-New Britain busway.

One of those riders is John Colon, who says his commute from New Britain to his job as a cook in West Hartford used to take 75 minutes each way, including the wait to transfer from one CT Transit bus line to another.

The trip from New Britain’s downtown station, a short walk from his apartment, to the Corner Pug, a pub across the street from a CTfastrak station in the Elmwood section of West Hartford, takes 15 minutes.

Transportation Commissioner James P. Redeker said federal transit officials, who provided all but $112 million of the construction funds, require the state to conduct a detailed survey next year about ridership, including measuring how many riders are new to mass transit.

The ridership numbers announced Wednesday date from April 6, when an introductory period of free rides ended and passengers began paying $1.50 fares for up to two hours of travel time. Buses arrive at stations every six to eight minutes.

“We’re exceeding all of our expectations,” Redeker said. “Fastrak has brought people to jobs, to family, to education, to opportunities for cultural events, for entertainment, for shopping, for food. It’s an enormous impact in this corridor.”

The statistics do not include express buses to Hartford from Waterbury, Southington, Cheshire and Bristol that enter the busway in New Britain, skirting morning rush hour traffic on I-84 from the west. They make the reverse trip in the afternoon.

Redeker wore a $15 custom tie he bought online. It had green stripes matching the green markings of the buses that travel the busway and circulator routes that connect to major employers, colleges and shopping centers.

Trailed by a trooper driving his official car, Malloy arrived by CTfastrak, but no one will confuse him with Michael S. Dukakis, the Massachusetts governor who commuted daily on a Green Line trolley to the statehouse in Boston, just another straphanger.

When the press conference ended, Malloy got into his waiting car, not a bus. Colon waited for Fastrak to take to him work, one stop away in the opposite direction.

Correction: This story originally reported that Malloy boarded the bus at an earlier stop.