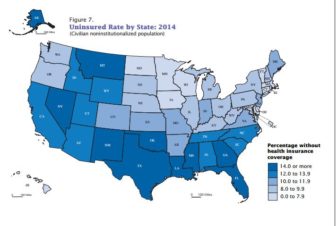 Uninsured rates fell in all 50 states and the District of Columbia from 2013 to 2014, and enrollment growth was highest in Medicaid and individually purchased private insurance – the two types of coverage most directly affected by Obamacare.

Starting in 2014, the health law made federal subsidies available to people to purchase their own insurance through marketplaces known as exchanges, and provided funding for states to expand Medicaid eligibility. The law also eliminated restrictions that prevented some people with medical conditions from buying coverage and required nearly all Americans to have insurance.

Nationally, the number of people without health insurance for an entire year fell from 41.8 million people in 2013 to 33 million in 2014 – from 13.3 percent to 10.4 percent, a sharp decline after several years of stability, according to the U.S. Census Bureau.

The national uninsured rate varied widely by race and ethnicity in 2014. Among whites, 7.6 percent were uninsured, compared to 11.8 percent of blacks, 9.3 percent of Asians and 19.9 percent of Hispanics.

Connecticut was one of six states that, along with Washington D.C., had uninsured rates estimated to be at or below 7 percent, based on the American Community Survey. Massachusetts had the lowest rate – 3.3 percent – while Texas had the highest – 19.1 percent. Kentucky had the largest drop in the uninsured rate – 5.8 percentage points – while Massachusetts’ drop 0f 0.4 percentage points was the smallest.

Previous estimates of Connecticut’s uninsured rate in 2014 have varied.

Last year, state officials said Connecticut’s uninsured rate had dropped to 4 percent, based on a survey of customers of the state’s health insurance exchange, Access Health CT. That survey relied solely on data about people who bought insurance from the exchange, but didn’t account for any potential changes in employer-sponsored insurance or other types of coverage.

Around the same time, Gallup reported that the state’s overall uninsured rate had fallen from 12.3 percent in 2013 to 7.4 percent in 2014.

Earlier this year, the Gallup-Healthways Well-Being Index reported that Connecticut’s uninsured rate dropped to 5 percent during the first six months of 2015.

Separately, a federal survey found that an estimated 4.3 percent of New England residents were uninsured during the first three months of 2015, the lowest rate in the country. That survey, the National Health Interview Survey, did not include state-level estimates.