New England uninsured rate less than half the national average 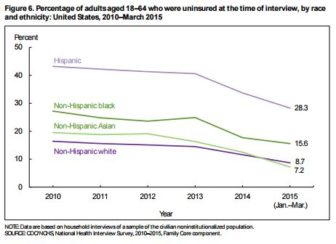 Uninsured rates by race and ethnicity

New England continues to have the lowest rate of residents without health insurance in the nation, even as the uninsured rate declined throughout the country, according to estimates based on federal survey data released Wednesday.

Among New England states, an estimated 4.3 percent of residents were uninsured, compared to a national average of 9.2 percent, according to the National Health Interview Survey, which covered the first three months of 2015 and was conducted by the Centers for Disease Control and Prevention’s National Center for Health Statistics.

The highest regional rate of uninsured residents was 15.6 percent in the West South Central region, which covers Arkansas, Louisiana, Oklahoma and Texas.

The report noted that there was variability in part based on how states have handled the coverage expansion provisions of the federal health law. States that expanded Medicaid eligibility had lower uninsured rates, as did states that set up their own health insurance exchanges to sell private coverage, rather than rely on the federal government’s exchange. Connecticut expanded Medicaid in 2010 and set up its own exchange.

The uninsured rate among young adults aged 18 to 24 fell to half its 2010 level, from 31.5 percent in to 15.4 percent, according to the survey. While those young adults were the least likely to have insurance of any age group in 2010, that distinction now belongs to those aged 25 to 34, 18.3 percent of whom were uninsured, according to the 2015 survey.

The survey did not include state-level estimates. This week, Gallup released survey results indicating that Connecticut was one of seven states with uninsured rates below 5 percent, along with Rhode Island, Massachusetts, Vermont, Minnesota, Iowa and Hawaii.

Gallup’s 2013 uninsured figure is higher than other estimates for Connecticut before the major provisions of Obamacare rolled out. In 2012, for example, U.S. Census estimates pegged Connecticut’s uninsured rate at 8.1 percent of the population.

Uninsured rate, by age
Estimates of the uninsured rate by age based on a survey conducted during the first three months of 2015. A person was considered uninsured if he or she didn’t have coverage at the time of the interview.
National Health Interview Survey

The two segments of health care coverage most affected by the health law – Medicaid and the individual insurance market – have grown in Connecticut in recent years, but it’s not clear how many of those new enrollees had another form of insurance in the past or had been uninsured.

The number of Connecticut residents covered by Medicaid – known in the state as HUSKY – has more than doubled since the start of 2010. In June, the program covered 747,735 people in the state. In addition, the number of people buying their own coverage through the state’s individual insurance market rose by 55 percent from 2013 to 2014, the year many of the major private insurance changes occurred under Obamacare. According to figures from the Connecticut Insurance Department, the number of individual-market customers has stayed essentially flat in 2015.

Access Health CT, the state’s health insurance exchange, reported last month that 51 percent of its new customers in 2015 did not have coverage before enrolling.