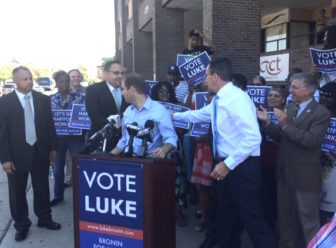 With an appeal for Democratic unity in Hartford, Gov. Dannel P. Malloy followed a time-honored script Thursday for things to say and do after a primary. He celebrated Luke Bronin’s capture of the mayoral nomination and praised the loser, Mayor Pedro Segarra.

But he hedged on how to respond to the victory by Joe Ganim in Bridgeport’s mayoral primary, unwilling to embrace Ganim’s comeback after a prison stint or to endorse Finch’s candidacy as an independent in November.

“I’m not doing anything on that race today. I have to have some conversations and take a look at it,” Malloy said, tersely acknowledging Ganim’s return as mayor of Connecticut’s largest city would be awkward. “Obviously, the situation is an unusual one by national standards.”

Malloy is not alone in playing for time on how to receive the win by Ganim, who was released from prison in 2010 after serving seven years on a conviction for accepting bribes and kickbacks as mayor. The state Democratic Party quickly issued statements of congratulations Wednesday night to the winners of mayoral primaries in Hartford, New London and West Haven.

On Bridgeport, there was silence.

The governor said he had not yet heard from anyone in Bridgeport urging him to help Finch, whom he endorsed in the primary, in November to avoid the embarrassment of returning Ganim to city hall.

“But I certainly expect there’s a lot of head-scratching going on right now,” Malloy said.

Finch, who left little doubt Wednesday night he would stay in the race, affirmed his intention Thursday afternoon with an email to supporters that began: “I’m in!”

He will appear on the ballot in November as the mayoral candidate of the Job Creation Party.

The Bridgeport issue overshadowed what Malloy had hoped would be a happy moment with Bronin, who stepped down as his general counsel to challenge Segarra for the mayoral nomination. The 60-year-old governor sees the 36-year-old Bronin as a kindred spirit.

Segarra has qualified for the November ballot as a petitioning candidate, but the strength of Bronin’s win and the mayor’s inability to compete financially lead many Democrats to believe that the mayor will end his campaign. Unofficial results gave Bronin a 10-point win.

“I want to say to Mayor Segarra, we are all grateful for your service. I have never questioned, and never will, Mayor Segarra’s love for this city, his commitment to this city,” Bronin said. “And I think he played a tremendously important role in stabilizing our city at a difficult time.”

As the leader of the City Council, Segarra became mayor in 2010 after the resignation of Mayor Eddie Perez, who was convicted of corruption charges. Segarra won a four-year term in 2011.

“I know he’s said he’s gong to take a little bit of time to figure out what he’s going to do next, and I respect that,” Bronin said.

“I want to add my voice of admiration and appreciation to and for Mayor Segarra, someone I’ve had the privilege and honor of working with over the last 4½ years,” Malloy said.

Malloy was publicly neutral in the Hartford primarily. “I honored my commitment to stay out of the race during its pendency, but that has ended,” Malloy said.

“I think the time has come for the party in Hartford to heal any wounds that may exist,” he said. “I will reach out to Mayor Segarra and have a discussion with him in the hopes we can avoid any further difficulties in Hartford and get this ticket ready for a win in November and, quite frankly, get everybody ready for the tough years ahead.”

“Let’s get the Bronin people out of the picture,” he said, lowering his voice. “You don’t want to be part of what I’m about to do.”

The warning seemed to promise a denunciation of the Bridgeport primary results. None came, at least for now.