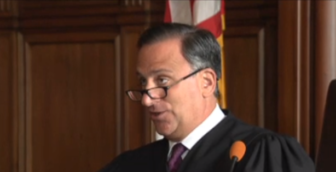 A Superior Court judge on Wednesday grudgingly agreed to delay the the start of a trial to determine whether the state is spending enough to ensure every student a quality education.

“Let me express, of course, my disappointment that after a decade of this litigation that the parties with a longstanding trial date in front of them are not ready yet,” Judge Thomas Moukawsher told attorneys involved in the case last week when they informed him they would be asking to delay the trail. “Whatever happens from here, you should consider yourselves on a very short leash…This case demands a resolution. It’s a decade old. And there has been plenty of time to try and prepare.”

The trial had been scheduled to begin in three weeks. It will instead commence Jan. 11 — 10 years after a coalition of parents, teachers and school boards filed suit against the state and six years after the Connecticut Supreme Court ruled that the state is responsible for providing a certain level of education.

“The parties should have been prepared to go to trial on [Oct. 17]. Therefore, no extensions of time beyond those permitted here will be considered,” Moukawsher wrote attorneys in the case Wednesday.

The delay was necessary, attorneys suing the state said, because they have not yet had a chance to depose all potential witnesses and do other legal work.

So far 101 potential witnesses have been deposed and 25 remain.

“We would like to have that all wrapped up nice and tightly before we begin the trial,” said Joseph Moodhe, an attorney for the coalition suing the state, the Connecticut Coalition for Justice in Education Funding.

Asked if the state has approached the plaintiffs to settle the case before trial, David Rosen, another attorney for the coalition, said it’s unlikely.

“I think everyone is expecting we are going to have a trial,” Rosen said.