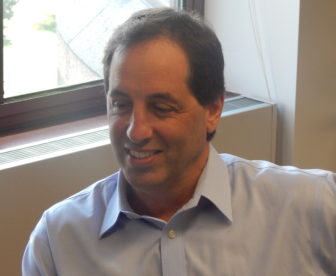 The director of the state legislature’s nonpartisan budget office for the past six years, Alan P. Calandro of Burlington, announced Thursday he is leaving to take an executive financial post at the University of Connecticut.

Calandro, who oversaw a dramatic expansion in the online posting of state budget documents, analyses and databases, led the Office of Fiscal Analysis during one of the most difficult budget crises in modern state history.

The legislature’s Office of Legislative Management has begun a search for Calandro’s replacement that is expected to be completed soon. OLM director Jim Tracy said an interim director to lead OFA during the search should be appointed within the next week.

“It is such a major loss for us,” said Rep. Toni Walker, D-New Haven, co-chair of the Appropriations Committee. “Al has been such a quiet voice that has always brought reason to the budget process. He was there for the Democrats and the Republicans to help us understand the intricacies of the budget process.”

“Al is going to be sorely missed,” Sen. L. Scott Frantz of Greenwich, ranking Republican senator on the Finance, Revenue and Bonding Committee, said. “He is a very intelligent person who knows how to be practical at the same time and keep things moving efficiently.”

Under Calandro’s leadership, the office not only increased public access to a host of budget documents, but increased staff access to various fiscal databases, Frantz added. The result: legislators’ questions on spending, taxes, the economy and other fiscal issues are answered more quickly than ever before, he said.

“To have that kind of information available at our fingertips is truly remarkable,” Frantz said.

Calandro “did a great job pushing technology in our office,” said Chris Perillo, one of OFA’s four section chiefs. “That allows us to respond to legislators with better information and with more timely information. That was totally his vision.”

A “transparency” search engine enables visitors to track line-item expenditures from the budget, or research salaries and other basic fiscal information tied to state employees.

Archives include annual budgets and fiscal notes for bills from each legislative session dating back to the 1970s.

In recent years, OFA began posting the original annual budget requests of state agencies — many of which are reduced before being included in the chief executive’s overall budget proposal to the legislature.

Calandro also ensured the legislature’s own administrative budget request was available for public review on the web.

We kind of post pretty much everything we get,” he said.

But while the approach to expanding public access was simple, Calandro said the task of providing nonpartisan assistance to legislators from both parties – particularly during tough fiscal times – could be more challenging.

Office staff provide the bulk of research and analysis behind both parties’ proposals for state spending and revenue each year. And while legislators generally are very appreciative of nonpartisan staff, he said, on some occasions – particularly when the economy is poor and nonpartisan analysts are the bearers of bad news – human nature takes over.

“In one sense, it’s an easy job: Just tell the truth,” Calandro said. “Now, sometimes, what we hear is like: ‘These are the numbers we’re getting from OFA again? What’s up with that office?’”

Pressed by Republican legislators to confirm Malloy’s claim that the deal would be likely to save $1.6 billion over two years, OFA ran into some roadblocks as the administration could not provide supporting information on some provisions.

“It’s a very interesting balance,” Calandro said of those struggles with the Malloy administration. “You learn there’s a time to demand information, a time to explain, and a time to bide your time. Sometimes it’s best to make some allowances, wait a little longer and try to work things out – but never at the expense of the final product.”

Calandro praised Malloy’s budget chief, Office of Policy and Management Secretary Benjamin Barnes, and the administration’s approach to a fiscal exercise they are required to share three times annually.

The “consensus revenue” statute requires the two offices to jointly revise projections for incoming tax receipts, grants and other revenues in January, April and November. And despite the tough fiscal times Connecticut has faced since that law was enacted in 2009, the exercise has always been about the numbers, not politics, Calandro said.

“I’ve not found it to be difficult at all,” he said. “It’s pretty nuts-and-bolts oriented.”

“I have nothing but the highest regard for Alan,” Barnes said Thursday. “He’s been a great counterpart to work with, and UConn is lucky to have him.”

Calandro joined the office in 1990 as a budget analyst. Focusing on the public safety, criminal justice and regulatory agency components of the budget, Calandro became a section chief before succeeding Geary Maher of Berlin as director after Maher’s retirement in 2009.

Calandro, who earned $178,491 per year as OFA director, effectively will receive the same salary at UConn. His annual pay there will be $178,500.