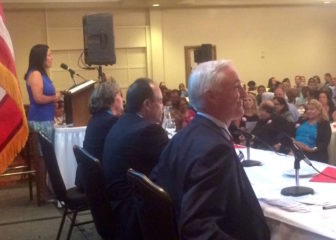 From right, Bill Finch, Joe Ganim and Mary-Jane Foster are introduced at a debate before the primary by Nora Duncan of the AARP.

The Job Creation Party missed a deadline for designating Finch as its nominee, leaving the two-term mayor without a place on the November ballot, said Av Harris, the spokesman.

“Whatever the problem is, I’m sure we’ll find a way to get on the ballot,” Finch said.

But Harris said Finch is foreclosed from running on the Job Creation ballot line, and the deadlines have long since passed to gather signatures as a petitioning candidate.

That would appear to leave the longshots of running as a write-in or hoping that another party-endorsed candidate would resign, giving Finch a shot at their ballot line.

Those other candidates are Republican Enrique Torres, and Charles Coviello, the nominee of the New Movement Party.

The news broke on the same day that Mary-Jane Foster, the distant third-place finisher in the three-way Democratic primary, announced she would not continue as a petitioning candidate.

Foster declined to say Monday evening if she was reconsidering getting back in the race to oppose the comeback of Ganim, who was forced from office in 2003 after a conviction on bribery and kickback charges.

One of her key supporters, however, saw a clear opening.

“With Finch off the ballot, I think she should reconsider,” said one of her supporters, Tom Swan, executive director of the Connecticut Citizen Action Group. “I think she will reconsider.”

Ganim and Foster filed papers as petitioning candidates prior to the Democratic primary, giving them a place on the November ballot regardless of the primary outcome.

Finch did not do the same. The Job Creation Party was widely seen as his back-up plan if he lost the primary, and Finch immediately announced after the primary that he would accept the minor-party endorsement.

One problem: By Sept. 16, the night of the primary, the Job Creation Party’s ballot line already was two weeks’ dead. Harris said the party needed to designate its candidate by Sept. 2.

“They didn’t submit the requisite letter of endorsement,” Harris said.

Harris said the Job Creation Party filed sufficient signatures for a line on the ballot on Aug. 5, with a man named Rich DeParle, a car salesman, listed as the party’s candidate for mayor. Two days later, DeParle withdrew, creating an opening for Finch.

“I think he was somewhat making a mockery of the election process with a used-car salesman,” Ganim said of Finch. “It was a sham.”

For Finch to become the Job Creation Party’s endorsed candidate, he would have had to accept two weeks before the Democratic Primary.

The oversight became public Monday after an inquiry to the secretary of the state’s office by Lennie Grimaldi. He chronicles Bridgeport politics in a blog with the name that once again rang true: “Only In Bridgeport.”