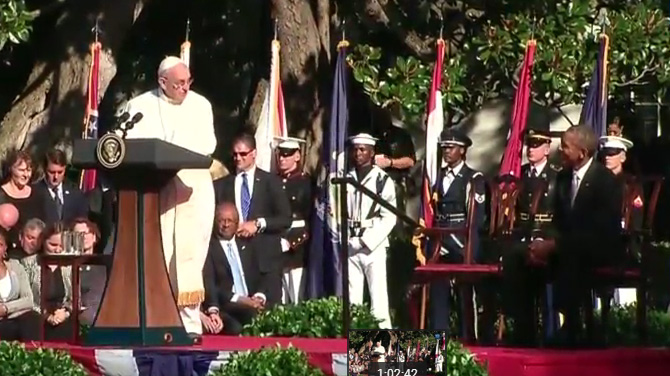 Pope Francis addressed President Obama and other dignitaries Wednesday at the White House.

Washington – The nation’s capital is living up to its reputation as a city of contradictions as it cheers Pope Francis’s gently accented words of hope and reconciliation amid a backdrop of a looming crisis – the increasingly likely shutdown of the federal government.

Malloy was one of 11,000 holders of one of the hottest tickets in town, one that allowed them to attend Wednesday’s welcoming ceremony on the South Lawn of the White House.

“Every Kennedy who has been born and is still alive was there,” Malloy said. “Everyone was very jovial, very relaxed.”

President Obama joked that his back yard was usually not that crowded.

For his part, Pope Francis immediately dove into the maelstrom of American politics, using his first speech to the nation to weigh in on climate change, immigration and the long–strained U.S. relations with Cuba.

The pope also signaled there was more to come when he addresses a joint session of Congress Thursday.

“I hope, as a brother, to offer words of encouragement,” he said.

Malloy said there was plenty of talk of politics, as well as faith, on the South Lawn. He said “the scuttlebutt” he heard during his short stay in Washington is that Congress will fail to reach a compromise on the federal budget – (conservative Republicans want to defund Planned Parenthood, Democrats, for the most part, do not) – and there will be a federal government shutdown on Oct. 1.

“Expectations are that Republicans are going to fail to pass a budget,” he said.

Meanwhile, the pope’s message to the public on immigration, climate change and Cuba was diametrically opposed to GOP’s positions on the issue.

“As the son of an immigrant family, I’m happy to be a guest in this country, which was built by such families,” Francis said.

The pope was born in Argentina to Italian immigrants.

Francis also lauded President Obama’s efforts by telling him “I am encouraged that you proposing a solution for climate change …it’s a problem that can’t be left to the future.”

But Francis’ position on religious freedoms and opposition to abortion makes the GOP more comfortable with the pontiff. It was a Republican leader, House Speaker John Boehner, R-Ohio, who invited the pope to address Congress.

Against the backdrop of the threat of a government shutdown, Rep. Steve King, R-Iowa, said he hopes the pope uses his address before Congress to reiterate the Church’s “unfailing and steadfast opposition to abortion.”

Francis has demonstrated mercy for women who have had abortions, saying priests should offer absolution to those who confess to having had an abortion, which remains a sin under Catholic doctrine.

Malloy is a Roman Catholic whose political beliefs, including the advocacy of abortion rights and same-sex marriage, has put him at odds with the church. But Francis’ “who am I to judge?” stance on gay rights and other issues that has divided Catholics is boosting this pope’s popularity.

Malloy lauded the pope’s comments in the South Lawn, saying they were on point.

“There are people in Congress who don’t recognize man’s involvement in climate change,” Malloy said.

Malloy plans to attend a mass for the pope today at the Basilica of the National Shrine of the Immaculate Conception, the largest Roman Catholic Church in North America. The governor will leave for Minnesota Thursday to attend a meeting of the Democratic Governor’s Associaton, a group he will soon head. ’