‘Pope of the people,’ citing history, urges Congress to act 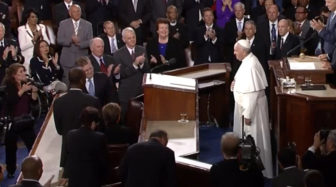 Pope Francis is applauded by members of Congress

Washington – Pope Francis sent a message of personal and social responsibility to a joint session of Congress and the nation Thursday, but also gently pressed lawmakers to end their partisan bickering and legislative dysfunction.

“Your own responsibility as members of Congress is to enable this country, by your legislative activity, to grow as a nation,” he told the assembly.

His address, the first by a pontiff at a congressional podium, impressed Connecticut’s lawmakers with its humanity and humility, yet its frankness in addressing important political themes.

Among those themes was the pope’s call for respect and acceptance of immigrants – “most of us were once foreigners,” he said, — the need for quick action on climate change and the responsibility to help the poor and the growing numbers of refugees in the world. He called for the end of the death penalty, provoking whoops of approval from Democrats.

He spoke of personal responsibility and the uniqueness of the United States, calling it “a land of dreams,” words that Republicans in the House chamber appreciated.

He also made an allusion to abortion.

“The Golden Rule also reminds us of our responsibility to protect and defend human life at every stage of its development,” he said.

And Francis had a special message for Congress. He cautioned a chamber riven by sharp partisan disagreements against falling back on strict ideology.

“There is another temptation which we must especially guard against: the simplistic reductionism which sees only good or evil,” he said. People must “confront every form of polarization which would divide it into these two camps.”

“Politics is… an expression of our compelling need to live as one, in order to build as one the greatest common good,” the pope said. To drive home the point, Francis said “legislative activity is always based on care for the people.”

“Today’s address was a much-needed reminder that we are here to serve the American people, not to waste precious time on petty squabbling,” he said.

riveting appeal for social justice and peace – saving the planet, stopping cycles of poverty and violence, welcoming immigrants and refugees to America…”

“My hope is that this profoundly powerful message moves Congress to action, recognizing the common good that Pope Francis evoked so eloquently,” Blumenthal said.

Every lawmaker was given one ticket to invite a guest to the galleries above the chamber. Sen. Chris Murphy’s guest was Bishop Frank J. Caggiano, the Fifth Bishop of Bridgeport.

Caggiano lauded the pope’s call for people, including members of Congress “to reconnect with society.”

“That’s what we all need to do,” the bishop said.

Murphy said Francis “was smart not to get into the political mix, but he made it clear that Congress had to act” on certain priorities, including climate change, help for the poor and help for refugees.

“It was interesting to me that he avoided an overt political tone,” Murphy said.

Monsignor Robert Weiss, of Newtown’s St. Rose of Lima Roman Catholic Church was the guest of Rep. Elizabeth Esty, D-5th District. “What I liked about the pope is that in every point he made, he did not point the finger of blame or shame,” Weiss said.

He also said that in the pope’s presence “you saw the humanity of the people of Congress.”

Esty called the speech “a powerful reminder of what unites us as members of society.”

Unlike the partisan responses at other joint chamber events, such as the annual State of the Union speeches, Democrats and Republicans applauded and came to their feet together during the speech, at least most of the time. About one third of the lawmakers in Congress are Roman Catholic.

There were seven Republican lawmakers and seven Democrats who helped usher the pope into the House chamber. Rep. Rosa DeLauro, D-3d District was among them, having been chosen by House Minority Leader Nancy Pelosi, D-Calif., for the honor.

DeLauro was often emotional during the address.

“I found myself with tissue, wiping my eyes,” she said.

DeLauro traveled with other lawmakers, including Pelosi, to Rome when the Francis was installed. But this was the first time she was in the same room with him.

She said one of the most “poignant” moments in the speech was when Francis reminded lawmakers he is the son of Italians who emigrated to Argentina.

“I am the daughter of immigrant parents, too,” DeLauro said. 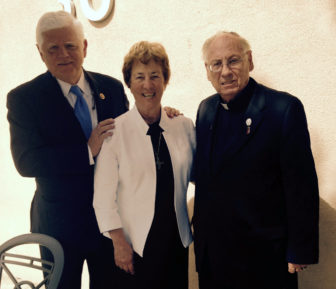 U.S. Rep. John Larson, left, with his guests for the pope’s visit: Sister Peggy Evans and the Rev. James Nock.

Sister Peggy Evans, a teacher at East Catholic High School in Manchester, and Father James Nock, the pastor at Our Lady of Peace Church and Blessed Sacrament Church, both in East Hartford, were invited by Rep. John Larson, D-1st District, to spend two days in Washington at papal events.

Evans grew up with Larson at the Mayberry Village public housing project and Nock has baptized all of Larson’s children and sat at the bedside of his dying mother.

Nock, who with Evans attended a reception for the pope at the White House and Francis’ mass at the Basilica of the National Shrine of the Immaculate Conception, said the pontiff “lived up to my expectations.”

“John’s invitation to come down here was a grace for me,” said Evans. “Pope Francis has been a favorite of mine since he was elected.”

Larson, a former history teacher, said “I think he did a very good job of weaving humanity with history to make a point.”

Besides referring to the Declaration of Independence, the pope mentioned the accomplishments of Abraham Lincoln, Martin Luther King, Jr., and other American icons.

Maria Zone, the spokeswoman for the Archdiocese of Hartford, could not travel to Washington for the pope’s visit. But she joined about 40 others in a “Pope Goes to Congress Watch Party,” in a seminary in Bloomfield.

Francis is scheduled to leave Washington late today, flying to New York, where he will end his day with evening services at St. Patrick’s Cathedral on Fifth Avenue. He will continue his six-day visit to the United States with a visit to Philadelphia.

The Archdiocese of Hartford will bus 250 people from Bloomfield, Cheshire and East Haven to attend papal events in Philadelphia.