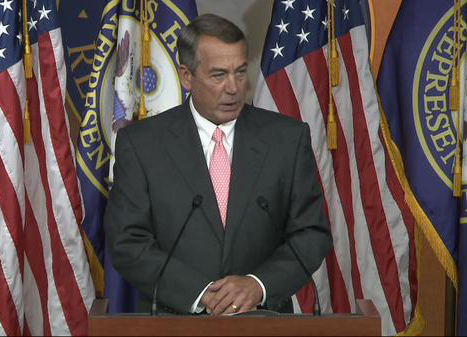 Washington – House Speaker John Boehner’s decision to resign may have lessened the prospects of a government shutdown, but that won’t be known for sure until Congress considers a short-term spending bill next week.  Meanwhile, Connecticut agencies have been told to draw up contingency plans.

Prospects of a federal government shutdown have been looming because conservative Republicans insist that Planned Parenthood should lose all of its funding in the next federal budget, something most Democrats strongly oppose. The current federal budget runs out on Sept. 30.

To ratchet up the pressure on the speaker and oust him from his leadership posts, the conservatives moved to hold an obscure and rarely used procedure known as a “motion to vacate the chair.” But the lawmakers appear now to have lost their main leverage to get what they want since Boehner has decided to step down on Oct. 30.

“Preventing a government shutdown might not appear to be an act of courage, but it speaks to the selfless nature of a man who put his country above his Speakership,” said Rep. John Larson, D-1st District.

Larson also said “Speaker Boehner met the challenges that stem from leading this institution with dignity; he often wore emotions on his sleeve, and wholeheartedly cared for the House.”

Sen. Richard Blumenthal, D-Conn., also lauded Boehner for his service and said prospects for congressional approval of a short-term spending bill, known as a continuing resolution, or CR, have increased with the speaker’s resignation. The Senate hopes to hold a vote on a CR, which would fund the government until Dec. 11, as early as Monday.

“Speaker John Boehner’s resignation clears a path for approval of a CR without continuing obstructionist efforts to defund Planned Parenthood – an opportunity that the House leadership should seize immediately,” Blumenthal said. “Speaker Boehner is a dedicated public servant who has worked hard to bring together a deeply divided Congress and Republican Party. Regardless of who succeeds him as Speaker, I hope this change in leadership will help bring Republicans together so the Congress can accomplish more, and move away from governing by crisis.”

Rep. Joe Courtney, D-2nd District, said “it’s clear that the Speaker’s decision was driven by the deep division in his caucus that was going to culminate in a Motion to Vacate filed by his Tea Party opponents.”

“I had my policy disagreements with him, but he understood that the tactics of shutdown, default and sequester which his opponents employ are harmful to the country,” Courtney said.

Even if a shutdown is averted next week, a showdown over the budget would come later this year — under new GOP leadership in the House that may not have any more luck in finding a long-term solution than did Boehner.

Planning for a shutdown

On Sept. 21, Ben Barnes, head of the Connecticut Office of Policy and Management, wrote to the heads of state agencies and leaders of the general assembly to dust off plans for a shutdown that were crafted in 2013, when the federal government was shuttered for 16 days.

“A ‘short,’ shutdown, lasting two weeks or less, would be inconvenient and create some cash flow challenges for certain programs, while a longer-term shutdown would be more problematic for federally-funded projects and programs administered by the state,” Barnes wrote.

Barnes noted that the federal government had not updated its contingency plans since right before the October 2013 shutdown, even as it’s required to do so every two years.

“While detailed federal guidance does not appear to be available at this time, your contingency planning should nonetheless proceed immediately,” Barnes wrote.

The White House Office of Management and Budget did not respond to questions about its failure to update plans.

In 2013, weeks of planning for the shutdown took resources from and focus away from daily operations at the federal agencies.

In the 2013 shutdown, thousands of federal workers were furloughed, that is, sent home without pay. Only military personnel in uniform, other defenders of homeland security and others deemed “essential personnel” stayed on the job.

But many government services would continue.

Mandatory spending not subject to annual appropriations, which funds Social Security, Medicare and Medicaid, would not be affected; nor would the issuance of passports or immigration services, since they are funded by user fees.

Some federal nutrition programs would stop, including food stamps, which was spared in the 2013 shutdown.

The Internal Revenue Service would also be shut down. The IRS would not be able to verify income and Social Security numbers. In 2013, a backlog of 1.2 million such requests potentially delayed mortgage and other loan approvals and billions of dollars of tax refunds were delayed.