Washington – Connecticut continues to lead the nation when it comes to personal income, federal economists say, but other reports show the state is also No. 1 when it comes to the uneven distribution of that wealth between the very rich and everyone else.

The U.S. Bureau of Economic Analysis said Wednesday that Connecticut benefited from an increase of 1.1 percent in personal income between the first and second quarter of this year — better than the national average of 0.9 percent.

The BEA says personal income grew in every state except Oklahoma in the second quarter. Washington state experienced the highest growth rate, 1.5 percent.

But, according to the Economic Policy Institute, Connecticut also leads the nation in the uneven way that income is distributed. 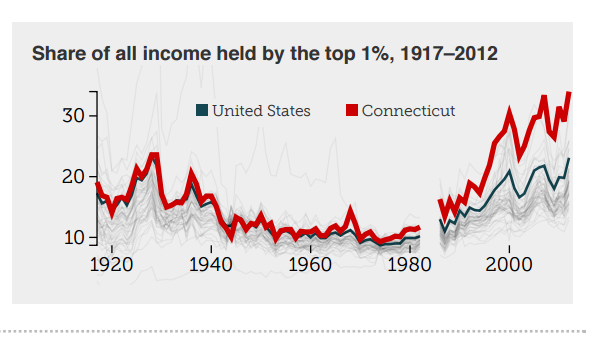 This chart by the Economic Policy Institute shows that Connecticut’s most wealthy hold a greater share of the state’s income than their counterparts do nationally.

“In both states the top 1 percent earned average incomes more than 48 times those of the bottom 99 percent. This reflects in part the relative concentration of the financial sector in and beyond the New York City metropolitan area,” the report said.

The EPI’s report said that, after adjusting for inflation, the income of wealthiest 1 percent of Connecticut’s residents grew by 35 percent between 2009 and 2012, while the rest of the state’s residents experience an actual drop in personal income of 5.4 percent.

“Clearly what’s stands out about Connecticut is that it has had a huge amount of growth among high-earners, not only since the recovery but in the last 35 years and that’s because of the financial sector,” said Mark Price, an author of the EPI report.

He expects that trend, which he called “the most extreme of what we’ve seen,” to continue.

The BEA’s release on personal income said Connecticut’s said the state’s income growth was  driven by the financial and insurance sectors.

The EPI’s data was derived from Internal Revenue Service filings, and the latest available information from the IRS is from 2012.

Price said he hopes the trend towards a wider and wider wealth gap has “reversed a bit” since 2012, with most Connecticut residents experiencing a slight positive growth in income in 2015 as the economy has grown stronger.

“But the meteoric rise in the income of the wealthy will continue,” Price said.

Edward McKenna, an economics professor at Connecticut College, also said “everybody is not benefitting” from the growth of personal income in the nation, which was 4.4 percent for Connecticut and the nation as a whole last year.

2014 per capita income by region
Fairfield County region by far the most wealthy
U.S. Bureau of Economic Analysis

McKenna said concentration of the nation’s income growth among the wealthiest Americans hurts the economy because the rich are more likely to save their money than middle class or low-income Americans. A low spending rate depresses the economy, McKenna said, and depresses growth of the gross domestic product or GDP.

Connecticut is lagging the nation in GDP.

He also said “it certainly would not be surprising to determine these kinds of developments are taking place in Connecticut.”

The BEA also said personal income is not distributed evenly within geographic regions of  Connecticut.

In 2014, personal income in the Bridgeport-Stamford-Norwalk metropolitan area was $82,009, the highest in the state, the BEA said.