Washington – How healthy is the state’s economy?

It’s a tale of two Connecticuts, and the subject of widely different viewpoints. But a recent federal report shows Connecticut’s big cities lag most others in the nation when it comes to economic growth.

All metropolitan areas in Connecticut, however, had much less growth: less than 1 percent. Even the Bridgeport-Stamford- Norwalk — an area that has in recent years had robust growth — had less than half of the average growth in GDP.

New Haven had them most anemic growth, just .3 percent.

The poor growth rates seem at odds with a Connecticut Business & Industry Association assessment that Connecticut’s economy is growing stronger.

CBIA economist Peter Gioia said the assessment by the BEA of Connecticut’s 2014 GDP is dated and likely to be revised upwards next year when the agency revises its figures. He also said the BEA’s GDP figures for 2015 will show stronger growth.

But Fred Carstensen, director of UConn’s Connecticut Center for Economic Analysis, said the BEA is accurate in its assessment of Connecticut’s financial health, an assessment that isn’t likely to change soon.

The BEA said Hartford’s GDP last year was .6 percent, or about $85 billion. Most of that GDP  — about $75 billion — was in private industry. The insurance and financial industries accounted for $42 billion, but that was down from the $47 billion generated by those industries in 2009.

Manufacturing in the area has also not returned to a pre-recession peak of $10.7 billion in 2007. It was only $9.3 billion last year, the BEA said.

The Hartford-West Hartford-East Hartford economy is also overwhelmingly service-oriented, the BEA said, with only about $12 billion in private good-producing industries.

“In spite of Yale, the Yale-New Haven Hospital and an emerging biological science sector, [the area] has had little growth, partly as a result of the brutality in the way the state has handled the hospital tax,” Carstensen said.

Besides an increase in taxes, the Yale-New Haven Health System has experienced a sharp reduction in state grants.

The Norwich-New London area contributed $15.5 billion to the state’s GDP. Unlike other Connecticut cities, it has not returned to its pre-recession growth. In 2008, its GDP was $17.2 billion.

The Norwich-New London area’s biggest slump was in manufacturing. The sector accounted for $4.8 billion in GDP in 2008 and nearly half that, $2.7 billion last year.

The health care and social services sector in the area has steadily grown, however, accounting for more than $1.2 billion in GDP last year.

Cartensen said the GDP in the area “reflects what’s going on in the casinos. They’ve had a lot of layoffs.

Combined revenues in the two Indian-run casinos in that area, Foxwood Resorts and the Mohegan Sun, fell from an estimated $3.2 billion in 2006 to less than $1 billion in 2014.

The Bridgeport-Stamford-Norwalk metropolitan area has been the engine of Connecticut’s economic recovery. The area had a $97 billion GDP last year. BEA data shows it is the only area in Connecticut whose economy did not shrink during the recession, enjoying year-after-year growth.

Finance, insurance and real estate accounted for nearly $40 billion in GDP in that area of Fairfield County, the BEA report said.

“In Fairfield County, it’s been steady growth because it’s got financial services, which has led to a very strong recovery,” Carstensen said. “It also has had a record number of people who are working in New York and spending their money in Fairfield County. Retail doesn’t add a lot of value, but it does generate some value-added.”

Economic growth was also strong in the Northeast corner of the state that is considered part of the Worchester, Mass., metropolitan area.

But Carstensen said the slow rate of GDP growth in Connecticut will continue. 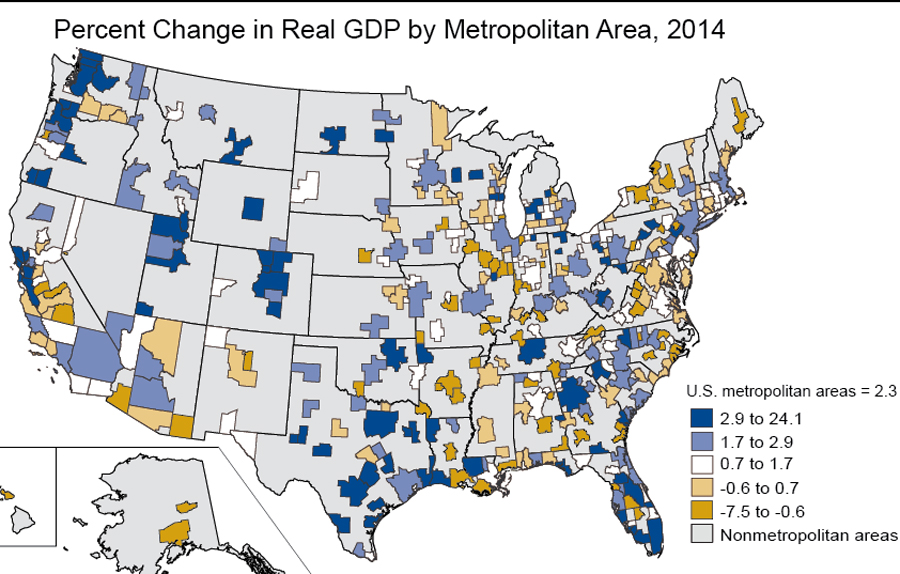