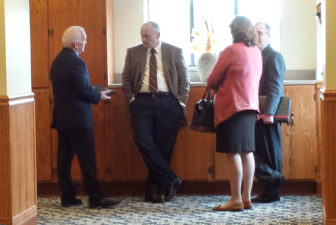 With an extremely tough budget year on the horizon, officials representing the University of Connecticut have started negotiating a new contract with some 4,000 professors and other unionized staff with the goal of cutting costs.

The university in June reported is was facing a $52.7 million deficit for the fiscal year that begins in July 2016 — a 4 percent hole in the $1.36 billion needed to continue providing existing programs, services and salary levels. That projection was made before the final two-year state budget was adopted, providing UConn $4.5 million less than its leaders were anticipating.

University officials declined Wednesday to provide updated budget projections for the the fiscal year that starts in nine months.

Employee wages will be on the table — whether there will be raises or a pay freeze — along with class sizes, vacation and sick time, and other working conditions. Health and retirement benefits will be left to the administration of Gov. Dannel P. Malloy to negotiate.

A spokesman for his budget and policy office declined to comment on whether the administration plans to ask state employees to renegotiate these benefits. The state budget overall, however, is projected to be headed for a large deficit in the coming years.

In 2011, the Malloy administration negotiated a two-year wage freeze followed by three years of raises for all unionized state employees, which includee staff at UConn. The administration declined to say whether it would be seeking to negotiate wages in the next contract on behalf of the university.

“We don’t comment on negotiations or negotiation strategy,” said Gian Carl Casa, a spokesman for the Office of Policy and Management.

With the university expecting to spend almost $800 million on wages and benefits this year for its 4,800 employees, the outcome of these negotiations will be an important factor in shaping the fiscal picture of the state’s flagship university in the years to come.

“This contact, along with the others, will have a direct impact on our ability to carry out our mission,” UConn Board of Trustees Chairman Larry McHugh told the school’s governing board Wednesday. “I trust there will be respect and trust on both sides of the table… We all want a contract that will recruit and retain the best faculty while balancing our fiscal responsibilities.”

But UConns’ largest union — the American Association of University Professors — is already upset and suspicious of officials at the university for deciding to hire outside attorneys to negotiate the next contract.

“The reaction from the faculty has been quick,” Michael Bailey, the executive director of the UConn chapter of the AAUP, told the schools’ governing board Wednesday. “Shouldn’t those public dollars be spent on educating students? And what funds will pay this counsel?”

The union’s website identifies different lawsuits that have been filed against the law firm that has been chosen and the “disastrous results” the firm has had when negotiating contracts at other universities.

In charge of negotiating and finding savings on behalf of UConn is the law firm McElroy, Deutsch, Mulvaney, & Carpenter LLP, whose headquarters are in New Jersey and has negotiated the contracts for Rutgers and other colleges across the nation.

“Because of this added assistance and advice, we will be in the best position to save the university, our students and the taxpayers more than any fees involved,” McHugh told his governing board. “I contend that it would be irresponsible to the taxpayers of Connecticut not to have the best advice available. The financial impact [of the next contract] on the university is so large.”

The contract with the law firm allows it to be paid up to $250,000, plus the cost of travel and lodging and expenses related to the negotiations.

Michael Eagan, director of labor relations for UConn, said his six-person staff is not equipped to handle multiple contract talks at once with four unions whose contracts all expire June 30.

“Myself and the staff that I have is spread pretty thin,” he said.

The union has already expressed concern on one request by the attorney representing UConn that would remove professors’ ability to file grievances and go to arbitration if they believe they have been discriminated against because of their race, gender, ethnicity or sexual orientation.

Eagan said it makes sense for such complaints to be handled internally through UConn’s Office of Diversity and Equity and if that is not sufficient, then an employee can file a complaint with the state Commission Human Rights and Opportunities, a state watchdog agency.

“We have very robust and comprehensive avenues for relief for all employees, faculty and staff and even members of the community to pursue claims,” said Eagan. “We have proposed that the other avenues are more appropriate and will result in a better outcome than a grievance and arbitration process which is designed to determine violations of labor agreements and not legal issues like discriminatory harassment.”

Eagan said the university has not outlined savings they wish to achieve through the negotiations.

“There is definitely scare resources, everyone recognizes that on both sides. We hope to work with the faculty to direct the scarce resources in the best possible manner,” he said.

At the Board of Regents for Higher Education — state’s largest public college system that includes the regional Connecticut State Universities and community colleges — negotiations have not begun. A spokesman for CSCU said the system’s head of human resources will handle the labor negotiations.

Michael Bailey of the American Association of University Professors addresses the UConn Board of Trustees.