Defining education — Does it include preschool?

An empty preschool classroom in Bridgeport

There’s agreement that too few children in Connecticut have access to quality preschool programs, but top state officials are butting heads with a coalition of parents and educators on how to put a near-universal system in place.

Attorney General George Jepsen argues that whether the state pays for universal preschool is an issue that should remain with lawmakers. His office is defending the State Department of Education and Gov. Dannel P. Malloy in a school-funding lawsuit brought by a coalition of parents, school boards, municipal leaders and teachers’ unions.

The coalition worries that lawmakers will continue to look at the budgets for early education programs as places to find money when times are tight.

A Jan. 11 trial date is set on the case that will determine whether the state is meeting its constitutional obligation to provide all students a quality education. Among other things, Hartford Superior Court Judge Thomas Moukawsher will soon have to determine whether evidence relating to preschool access will be permitted.

The Connecticut Supreme Court ruled almost six years ago that the state is responsible for providing a certain level of education, but did not specify whether that includes preschool.

In New Jersey, the state’s supreme court mandated access to preschool for every child in the state’s poorest school districts. Before the 1998 New Jersey Supreme Court decision, in a case known as Abbott v. Burke, the state was providing preschool to about 6,000 children. A few years after the decision, nearly 50,000 children were being served.

In Connecticut, Gov. Malloy, who expanded preschool during his first term, has said he thinks the state can get to universal preschool without a court order. However, the number of children enrolled in high-quality early education programs has decreased over the last few years, reports Connecticut Voices for Children, a New Haven based advocacy group. 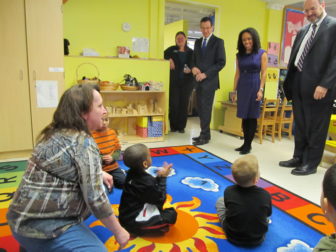 Gov. Dannel P. Malloy visits a preschool classroom in Meriden with his commissioner of the Office of Early Childhood.

A state effort to expand preschool access by spending $15 million more last fiscal year and $20 million more each year afterward until 2024 has gotten off to a slow start.

Malloy has said that nowhere in the state Constitution is there a requirement to provide preschool education.

“The framers of the Constitution, including at its last major revision, did not anticipate early childhood education as being part of the guarantee,” Malloy told reporters in 2011, only days after the attorney general filed a motion in to exclude preschool from the lawsuit.

And with the trial now looming, the judge will soon have to rule.

“Without increased access to Pre-K, Connecticut will continue to suffer from large achievement gaps and high levels of school failure for children from low income families, racial and ethnic minorities, and children from homes where English is not the primary language,” the Connecticut Coalition of Justice in Education Funding wrote the court last week.

The state still has a long way to go before it reaches universal preschool for the state’s 3- and 4-year olds. State officials reported earlier this year that 10,109 children from low-income families — nearly one-third of poor students — cannot afford to enroll in a high-quality preschool program. To provide universal access to preschool, districts would have to add 814 more preschool classrooms.

Connecticut ranks 29th nationwide among the states for access by 4-year-olds to a high-quality preschool, reports the National Institute for Early Education Research.

“Early childhood programs ought to be one of the tools that could be required by the courts to provide an adequate education,” said Merrill Gay, a plaintiff in the case and the executive director of the Connecticut Early Childhood Alliance.