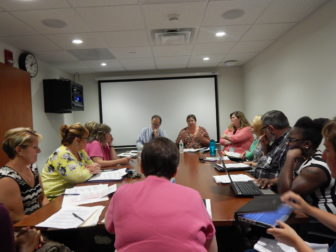 The Middlesex Hospital Community Care Team at one of its Tuesday meetings to discuss care plans for some of its clients.

Rather than cut $4.7 million from mental health and substance abuse treatment providers, as Gov. Dannel P. Malloy called for last month, the state Department of Mental Health and Addiction Services plans to shift the cut elsewhere in its budget and delay the start of new programs.

The tradeoff drew both criticism from proponents of one of the delayed programs and praise from those whose funding is being spared.

One casualty of the shift is a new grant for hospital-based “community care teams,” which bring together health care and social service workers to help address the needs of people with mental illness or addiction who frequently visit emergency rooms. That cut, which totals $1.5 million this fiscal year, drew criticism from hospital officials, who called it short-sighted, since the model has saved money by reducing emergency-room visits. (Read about the community care team based at Middlesex Hospital here.)

To implement the governor’s cuts, the department is also reducing the expected growth in caseload for young-adult services from 3 percent to 2 percent, and counting on spending less than was budgeted for services provided in new housing units for clients that are being developed. Because not all of the housing units are expected to be on line by the end of this fiscal year, the agency anticipates having some funding left over, and is using it to offset the cut to mental health grants, spokeswoman Mary Kate Mason said.

Mason said the department wanted to implement the cut “in a way that is most sensitive to the needs of those who now depend on our services” and would leave existing community services intact.

Mason said the department remains committed to the community care team model and will work to implement it.

“DMHAS’ decision to slow down or late-start new initiatives in our mind made sense because, rather than cut an existing program, like outpatient [treatment], and then turn around and start something new, it makes a lot more sense to delay starting a new initiative,” said Heather Gates, president and CEO of Community Health Resources, a mental health and substance abuse treatment provider that serves more than 20,000 people per year.

Cutting the treatment grants, she added, would “immediately affect thousands of people across the state.”

The fate of state grant funding for mental health and substance abuse treatment services has drawn significant attention from providers and legislators this year. The grants have long been used to help offset the cost of caring for patients who are uninsured or underinsured.

In his February budget proposal, Malloy proposed cutting the grant funding by $25.5 million, reasoning that providers would probably be able to recoup the money, since more people have Medicaid and providers could bill that coverage.

But a DMHAS analysis found that because some Medicaid rates pay less than the cost of care – particularly those for outpatient treatment – providers would not be able to make up the lost grant funding simply by billing clients’ coverage. The department’s analysis suggested that additional Medicaid billing would likely only offset about $7.3 million of the $25.5 million cut – leaving providers $18.2 million in the red.

Legislators sought a smaller cut, and the budget adopted in June cut the grants by $8.5 million, rather than the $25.5 million Malloy sought.

Then, last month, Malloy issued $103 million in emergency budget cuts in response to concerns about tax receipts and the volatile stock market. Malloy’s cuts, known as rescissions, included a $3.6 million funding reduction for mental health treatment grants and a $1.1 million cut to grants for substance abuse treatment. That again drew an outcry from treatment providers, who warned that they could be devastating.

The decision to instead delay new initiatives, including the community care teams, frustrated those who work on the teams. Carl Schiessl, director of regulatory advocacy for the Connecticut Hospital Association, said the hospitals that have already started using the model have found that they have four benefits: improving patients’ outcomes, reducing stress on health care providers, encouraging collaboration between various mental health, medical and social service providers in a region, and reducing health care costs.

“So you’ve turned a four-way win into a loss with a stroke of a pen,” he said.

The state grant included in the adopted budget called for $1.5 million for community care teams this fiscal year and $3 million next fiscal year. Schiessl said providers will probably continue efforts to use the model because they’re committed to it.

“I understand the position of the commissioner,” he said, referring to DMHAS Commissioner Miriam Delphin-Rittmon. “She’s working hard to keep a safety net in place. Unfortunately, there are consequences to these decisions.”