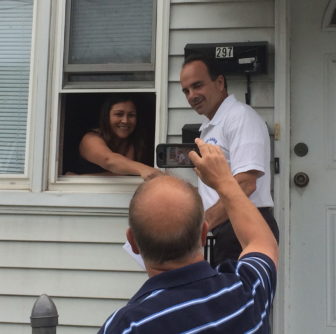 Joe Ganim on a recent day of campaigning: A handshake through an open window, and photo bound for Facebook.

“I don’t think he‘s earned that endorsement, to tell you the truth,” Malloy said in response to questioning by reporters after an event in Hartford. “I think it’s a difficult situation that’s played itself out in Bridgeport, and an unfortunate one.”

Malloy endorsed Finch in the primary, but he has steadfastly refused to either embrace Ganim, who served seven years in prison for accepting kickbacks and bribes as the city’s mayor, or the Democrat who remains on the November ballot as a petitioning candidate, Mary-Jane Foster.

Republican State Chairman J.R. Romano has called on Democrats to ask Foster to withdraw and allow the GOP nominee, Enrique Torres, to become the last best hope for stopping Ganim’s return to city hall. Seven mayoral candidates are on the November ballot.

Malloy, a Democrat, scoffed at the suggestion that Torres was viable in a city with a small Republican presence. Foster is backed by Finch and grass-roots groups that helped elect the city’s two liberal Democratic state senators, Ed Gomes and Marilyn Moore.

“Did the Republican candidate get out of the race?” Malloy said. “No, I didn’t think so. What I would say to the Republican chairman is if they were serious about seeing Mr. Ganim defeated, then maybe they should have pulled their candidate and backed another candidate.”

Malloy said his non-endorsement of Ganim itself was a strong statement.

“I have not endorsed the Democratic candidate, and I’m a Democrat. I guess there’s a message there,” Malloy said.

Romano said the Democrats were passive-aggressive in their soft opposition to Ganim.

“They’re trying to have it both ways,” he said. “A non-endorsement, that speaks volumes. But at the end of the the day, they aren’t lifting a finger to stop this from happening.”

Ganim, who was mayor from 1991 until his conviction in U.S. District Court on 16 counts, including racketeering and conspiracy, forced his resignation in 2003, downplayed the governor’s remarks.

“If I have the honor of being elected mayor, I look forward to working with everyone for the betterment of Bridgeport,” he said.

Tom Swan, a top adviser to Foster, tried to amplify them.

“The governor’s remarks speaks volumes about how much people do not want to go backwards to the corrupt ways that Joe Ganim’s candidacy represents and recognize that Mary-Jane Foster is the candidate to move Bridgeport forward in a positive direction,” Swan said. “It proves Mary-Jane’s message that she is the only candidate that has the trust of key partners to build a better Bridgeport.”

The governor, a strong proponent of easing the re-entry of inmates back into the job market, said there was no inconsistency in viewing Ganim as unqualified for a return to what federal prosecutors considered be the headquarters of a racketeering conspiracy during his tenure, Bridgeport City Hall.

“I think he deserves a second chance. You know, he’s found employment elsewhere,” Malloy said. “But he’s not even had his legal license reinstated. And didn’t have it reinstated in part through a legal process that found he hadn’t told he complete truth about his application.”

“So there are second chances,” Malloy said. “And then there is well beyond that.”

Ganim initially sought reinstatement as a lawyer without admitting wrongdoing. A local panel of lawyers backed his reinstatement but were overruled in a scathing decision by a Superior Court judge.

‘‘The egregious misconduct at issue was not an isolated error of judgment or a youthful indiscretion but a deliberate, repeated pattern of dishonesty and corruption,” the judge concluded. “The crimes [the defendant] was convicted of directly implicate the core components of honesty, trustworthiness, and fair-dealing, which are fundamental to the legal profession.’’

In April 2014, 16 months before Bridgeport Democrats chose him as their nominee in a three-way primary, the Connecticut Supreme Court unanimously concluded in a decision by Chief Justice Chase Rogers that Ganim had failed to prove he was fit to practice law:

“In short, given the extensive egregious misconduct that led to the defendant’s suspension, the evidence he submitted to show that he had rehabilitated himself fell far short of what was necessary to prove his fitness with the requisite degree of confidence so that he again could be entrusted with the responsibilities of an attorney.”

Rogers wrote that a criminal conviction is not an absolute bar to regaining a law license, nor does state law suggest what constitutes and adequate period of rehabilitation.

“We are confident, however, that in the present case, the defendant has not demonstrated a period of exemplary behavior persisting for a sufficient period of time to offset his transgressions,” she wrote, “and, accordingly, to provide the necessary assurance that he may once again be entrusted with the practice of law.”