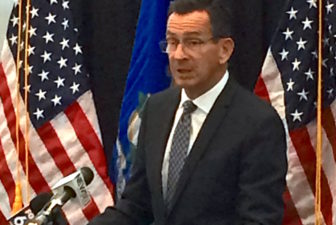 But this week, the governor dramatically altered the strategy he unveiled in 2012.

Despite those earlier efforts, pension costs are still spiking faster than anticipated, Malloy said, a problem that could drive up future taxes and drain funding from health care, education and other government priorities.

And while the administration attributed the need to change strategies after three years to a sluggish stock market, the problem is larger than that.

Though Malloy has steadfastly opposed paying incentives to get senior workers to retire — a maneuver that gives budgets a short-term boost, yet weakens the pension fund over the long haul — other policies nonetheless have caused retirements to surge during his administration.

The governor also was unable to accelerate pension contributions over the past three years as much as he originally hoped.

“We need to strive to re-establish that level of predictability” in Connecticut’s budget and its tax system, Benjamin Barnes, the governor’s budget director, said Wednesday.

That can’t be done when the $1.5 billion annual contribution to the pension system — as it’s currently structured — stands to double by 2025, and more than quadruple by 2032, he said.

Connecticut is trying to play catch-up with a pension fund plagued by decades of under-funding that only has enough assets to cover 41 percent of its long-term obligations.

Barnes said the return on pension fund investments has averaged 5.5 percent since 2000, while the fund counts on an average return of 8 percent.

The new pension solution, Malloy said Wednesday, is similar to refinancing. Connecticut, which hoped to have its pension house in order by 2032, now might not complete that task for another decade or two.

The administration now wants to contribute at least $8 billion less to the pension fund between now and 2032 than it would under the current system.

The annual pension cost, which would hit around $2 billion next year, would stay that way for decades into the future.

Under the governor’s plan, Connecticut still would catch up on its pension contributions — after 2032.

That’s when the current system called for annual pension costs to drop below $400 million annually.

The Malloy proposal would keep it around $2 billion much longer than that.

How much investment earnings might Connecticut miss if it stretches out the pension fix? And how long would it be extended into the future?

The administration is still refining those details, Barnes said Wednesday. But he did say the fix could be extended into the mid-2050s.

Still, the administration tried hard this week to reject the image that it was dumping problems on the future.

“We are not kicking anything down the road,” Malloy said, citing a phrase he and other gubernatorial candidates used in 2010 to describe the fiscal gimmicks that had weakened the pension system and created a record-setting state budget deficit at that time.

“It is simply irresponsible to leave more and more debt for future generations.”  Malloy wrote in his 2010 campaign platform on “Taxes & The Budget.”

The governor insisted this week that it would be irresponsible to pretend state finances, and taxpayers, could afford a $6 billion-plus pension expense down the road.

Postponing some pension payments until later to avoid that fiscal iceberg is the best option, Malloy said, adding that his new plan would “smooth out” the late-term costs.

Still, the governor thought he had averted this type of problem in January 2012 when he insisted the state could stabilize its pension fund just by saving more aggressively.

Malloy and labor unions revised the benefits contract at that time, repealing provisions from the mid-1990s that allowed the state to skimp on its pension payments and adding $130 million to Connecticut’s contribution right away.

But the governor also announced the state would voluntarily add about $300 million to its required pension contributions starting in the 2013-14 fiscal year. That step never was implemented as the state struggled to balance its subsequent budgets.

A bigger problem that undercut the governor’s 2012 pension fix actually involved a deal he and unions reached the year before.

A concessions package ratified in August 2011 tightened retirement benefits — but gave employees a two-month window to retire before it took effect.

Nearly 2,950 workers retired in 2012. During the four previous years without a formal retirement incentive program, worker retirements had averaged 1,381.

Any surge in retirements traditionally assists the budget, by lowering salary costs, but weakens the pension system in the long run.

That’s because workers who normally would be working – and paying into the pension system – instead are retired, and drawing funds out of the system.

The pension fund had enough assets to cover about 48 percent of its long-term obligations when Malloy announced his pension fix in 2012. As of the last valuation, the funded ratio is slightly below 42 percent. Fund actuaries typically site a funded ratio of 80 percent as a mark of strong fiscal health.

All basically applaud Malloy for thinking long-term, but reserve final judgment until they see the numbers.

The Yankee Institute, an East Hartford-based conservative policy group, also praised Malloy for recognizing the huge costs bearing down on the state budget.

And while institute President Carol Platt Liebau called that an important first step, she also said the state should modify its retirement benefits for new hires, offering a 401(k)-style, defined contribution plan instead of the current guaranteed benefit plan.