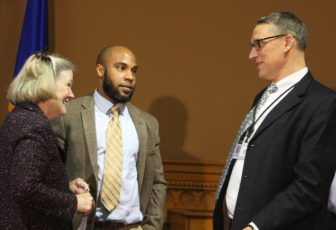 The treasurer, who oversees the investment of pension funds, also told Connecticut’s investment advisors Tuesday she would offer a “less radical” alternative next month to the governor’s plans for pensions involving state employees and public school teachers.

The Teachers’ Retirement Board, which oversees and administers benefits for some 46,000 retired teachers and their spouses, is also working on an alternative plan. Last week the board voted to have actuaries with Cavanaugh Macdonald Consulting offer alternative approaches to funding the teachers’ pension plan, which has $10.8 billion in unfunded liabilities. Those recommendations will be presented to the Teachers’ Retirement Board in February.

Malloy told Capitol reporters Tuesday changes are necessary to fix a pension system that has suffered from decades of neglect. He was joined by leaders from the Center for Retirement Research at Boston College, hired by the state to study its pension problems.

Though the full plan still is being developed, the governor is seeking to stabilize the two pension systems struggling with several common problems:

The state’s required contributions to these funds — already considerable — are projected to spike over the next decade-and-a-half.

For example, if investment returns on the state employees’ pension fund continue to average 5.5 percent — as they have for the past 15 years — the administration says this year’s pension contribution of $1.5 billion stands to double by 2025, and more than quadruple by 2032.

Most of those rising pension costs revolve around employees who retired more than 30 years ago and who worked largely when the state saved nothing to cover their retirement benefits.

The governor’s presentation highlighted that nearly all of the unfunded teachers’ pension liabilities — $10.4 billion of the $10.8 billion — are for teachers who were hired before 1979.

The governor’s plan centers on effectively removing these retirees from the pension fund. Their benefits would not change and would still be paid, but the state would only pay to cover actual costs each year as opposed to paying down that unfunded debt.

Connecticut would continue to make payments into the pension fund, saving for benefits owed to state employees and teachers still on the job. But most state resources between now and 2032 would be focused on paying benefits.

At the same time, the state would save less for existing employees between now and 2032 under the governor’s plan than it would under the current system. After 2032, and for one or two decades into the future, it would save more.

According to Jean-Pierre Aubry, associate director of state and local research at the Boston College-based center, this approach would enable Connecticut to spread the burden of fixing decades of pension under-funding over multiple generations. The current system dumps most of it on just one, he said.

“The question is what generation pays it; whether it’s this generation or whether it is spread over multiple generations,” he said. “This distributes the burden of unfunded liability … more equitably across generations.”

Many groups have reacted cautiously to the proposal.

The state employee unions, Comptroller Kevin P. Lembo, Republican legislative leaders, and the Connecticut Business and Industry Association all have said they are waiting for further details.

“We’ll take a close look at the center’s recommendations for shoring up the fund,” said Jan Hochadel, president of AFT Connecticut, which represents teachers across the state. “Going forward, any proposed changes must be consistent with our commitment to retirement security, not just for our members, but for all working people in America.”

Treasurer Nappier, though, has noted that if Connecticut invests less over the next decade-and-a-half than it would under the current system, it will have lower investment earnings to ease the burden placed on taxpayers.

“That’s how we got to where we are today,” she told the state pension funds’ Investment Advisory Council on Tuesday.

Nappier also noted that pension investments have had to be more conservative, and therefore earn lower returns, over the past 15 years because of the state’s poor savings habits.

When the pension funds are low on assets, it is more difficult to maintain an adequate cash flow to pay benefits in a timely fashion. Short-term investments that earn less but can be liquidated quickly become necessary.

When asked how much in potential investment earnings might be forfeited if the state implements the governor’s proposal, Aubry said the center hadn’t developed a projection.

The treasurer also said Thursday that there could be some significant legal hurdles for another part of the governor’s plan.

The schedule of state contributions to the teachers’ pension fund is largely fixed for the next 18 years. That’s because Connecticut borrowed $2 billion in 2008 to bolster the pension, and promised in the bond covenant — the contract between the state and its bond purchasers — to make all required pension contributions for the life of the 25-year bond issuance.

So could Connecticut alter contributions into the teachers’ pension to spread the cost of the next decade-and-a-half over a longer period, into the 2040s or 2050s?

“I take the very strong position that it would be a (legal) problem,” Nappier told the Investment Advisory Council.

The Teachers Retirement Board is in the final stages of hiring legal counsel so it can determine which options are viable, given the state’s promise to its investors from 2008.

“It would be premature for me to form an opinion now,” Darlene Perez, the administrator of the TRB, said during an interview.

Mark Waxenberg, the leader of the Connecticut Education Association, the state’s largest teachers’ union, said he believes the governor’s proposed changes do not break the state’s promises to investors.

“We believe that the fund would not be destabilized and the bond covenant would not be violated,” Waxenberg said during an interview. “There are really two choices: you either pay now or you pay later. I am the type of person who likes to pay my bill now, but to do that you would either need to increase taxes somewhere immediately to pay for this underfunding, or you ammoratize it over the long term. Either plan is not a pleasant decision.”

The treasurer’s general counsel, Catherine LeMarr, also questioned whether paying benefits to some retired workers out of the state budget — and not out of the pension fund — would require federal Internal Revenue Service approval.

This question needs to be answered, according to the treasurer’s office, to ensure the federal tax advantages afforded to state pension recipients are not affected.

“There’s a potential liability for those beneficiaries,” LaMarr said.

“This recommended split of the [pension fund] presents some significant legal, procedural, financial, and actuarial questions which will take some time to answer,” Barnes wrote the governor Tuesday.

Nappier also said the Malloy administration should have developed its plan from the beginning in consultation with her office.

“We just wish we had been at the table,” Nappier told a representative of Malloy’s budget office during Tuesday’s meeting of the Investment Advisory Council. “We didn’t even know a study had been commissioned. We’re in this together.”

Nappier told the Investment Advisory Council she would reserve final judgment on the governor’s plan until she had received all details, but said she anticipated offering her “less radical” alternative at the council’s December meeting.