Fiscal flood warning: Nothing but red ink forecast in CT 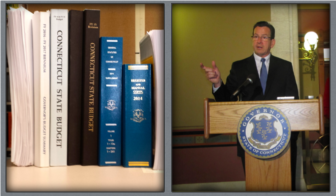 Nonpartisan fiscal analysts issued projections Friday that Connecticut, already coping with a significant budget shortfall in the current year, is facing a far worse problem just over the horizon: nearly a $2.3 billion gap in state finances over the next two fiscal years.

The legislature’s nonpartisan Office of Fiscal Analysis is projecting a $552 million deficit in the next fiscal year, which begins July 1, 2016. And finances are on pace the following year to run $1.72 billion in the red unless adjusted. That gap represents 8.5 percent of annual operating expenses.

The new report also confirmed estimates issued earlier this month that the current state budget is about $254 million in deficit.

Gov. Dannel P. Malloy’s budget office largely echoed OFA’s estimate for the coming fiscal year with a $508.1 million deficit projection. But the administration — which employs a different methodology for calculating deficits — pegged the post-election shortfall in 2017-18 at $1.28 billion.

All of these deficit projections again raise the prospect of a new debate on tax hikes and threaten initiatives meant to increase spending for municipal aid and transportation infrastructure. The shortfalls are projected despite the approval in June of an annual tax increase of more than $650 million.

The $1.72 billion shortfall projected for 2017-18 is the largest since Gov. Dannel P. Malloy took office in January 2011. At that time, nonpartisan analysts estimated that the budget left behind by Gov. M. Jodi Rell and the 2010 General Assembly had a record-setting $3.67 billion deficit built into it.

Analysts for the executive and legislative branches are required under the state’s Fiscal Accountability Act to provide both short- and long-term financial projections to the legislature’s two key budget committees annually by Nov. 15.

The growing deficits are due to several factors, but one of the largest involves Connecticut’s single-biggest source of revenue: the personal income tax.

Receipts, both from paycheck withholding as well as from quarterly filings tied largely to investment earnings, have grown in recent years — but not at the pace they did before the Great Recession.

For example, income tax receipts this year already are coming in almost $190 million below expectations, according to nonpartisan analysts, and that trend continues into the next two years.

On the spending side, debt is taking a heavy toll on the state budget. Payments owed on bonding — which finances most state capital projects — are rising sharply. After borrowing more than $1.9 billion last year, Malloy announced this year he expected the state to bond more than $2.5 billion. Republican legislators and other critics have complained that the state increasingly is relying on its credit card to cover operating expenses, and not just capital projects.

Soft debt, particularly Connecticut’s poorly funded pension fund for state employees, also is draining the budget. The state’s required payments into that fund continue to rise sharply, a problem that several officials say is projected to continue until 2032.

And according to state Comptroller Kevin P. Lembo, more than 80 percent of this year’s pension contribution has nothing to do with benefits for current employees. Rather it reflects the state’s failures to save adequately in past decades for workers who’ve already retired, as well as unrealistic expectations for pension fund investment earnings.

The big post-election deficit also reflects some problems that Malloy and legislators deferred from the last term.

For example, the 2011 concessions deal the governor struck with state employees requires all workers to forfeit 3 percent of their pay to help fund their retirement health care. Connecticut agreed to match that payment, but deferred the start of that match — an annual cost of about $115 million — until 2017-18.

The main difference between the administration’s post-election forecast and that of nonpartisan analysts involves methodology.

The Malloy administration broke from its predecessors three years ago and began using a “current practices” approach. In other words, while nonpartisan analysts’ numbers reflect all legal requirements, the administration ignores those requirements that legislatures often have deferred repeatedly in the past. These could include, for example, minimum funding levels set by formula for municipal grants, or frequently-postponed-but-not-repealed tax breaks due in the next few years.

But the administration also largely does not apply inflationary increases to its calculations, which is more controversial among some fiscal analysts. The nonpartisan estimate includes a $418.3 million adjustment in 2017-18 to reflect inflation.

Despite Malloy’s assurances last year that Connecticut would not face a deficit, Lembo certified a $113.2 million shortfall when he officially closed the books on the 2014-15 fiscal year in late September.

Still, Malloy and legislators have known for several months that post-election finances were in trouble.

Nonpartisan analysts projected back in late June, when the new two-year budget was adopted, that the first fiscal year after the November 2016 state elections was on pace to run $927 million in the red. And problems involving both revenues and expenditures only have worsened since then.

Both the governor and his fellow Democrats in the legislature’s majority also will be hard pressed in the face of these growing deficit numbers to preserve two major new initiatives launched this year.

The governor secured a portion of state sales tax receipts to fund a five-year ramp up of investments in transportation. Similarly, Democratic legislators dedicated a share of the sales tax to bolster aid to cities and towns. One high-profile component of that plan involved capping municipal property taxes on motor vehicles, particularly on urban areas where they tend to be the highest.

But Republican legislators and other critics noted that while Malloy and Democratic lawmakers hailed these initiatives as big achievements now, neither were slated to receive major funding until next year,

By 2016-17, resources dedicated to transportation are supposed to about $250 million over last year’s level, due largely to an infusion of sales tax receipts. And in 2017-18 they would climb by another $100 million.

Similarly, cities and towns are supposed to begin sharing some of the state’s sales tax revenues, getting almost $230 million next fiscal year and almost $290 million in the first new budget after the election.

But the post-election deficit is five to six times the size of the extra cash due transportation or municipalities in 2017-18 — and two-and-a-half times the funding for both initiatives combined.

House Speaker J. Brendan Sharkey, D-Hamden, while speaking earlier Friday about ongoing efforts to stabilize state finances both now and in the long-term, conceded that the municipal aid initiative would be part of those discussions.

“I think, for all of us in our caucus, we want to have an open mind to consider all possibilities,” he said. “Beyond that it’s hard to comment on where everybody is on that.”

But Sharkey added that for him and many other Democrats, the municipal aid initiative remains among their highest priorities. “It continues to be and I think our caucus feels the same way,” he said.