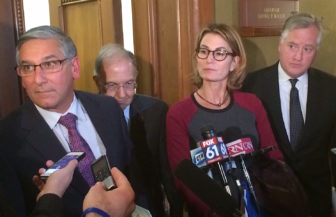 State budget talks made little progress Wednesday but will continue for at least one more day as legislators from both sides conceded a self-imposed deadline is nearly upon them.

And the potential to shrink growing state deficits may not be the only thing at stake. Gov. Dannel P. Malloy also hopes to extract new business tax relief from these talks He also confirmed he is continuing to talk with General Electric in hopes of convincing the major corporation to remain in Connecticut.

But Malloy refused to confirm a rumor that he would meet with GE officials this Friday.

“We kind of said we really have to get it done, though, tomorrow,” Senate Minority Leader Len Fasano, R-North Haven, said late Wednesday afternoon after top lawmakers from both parties emerged from their second consecutive day of closed-door talks with the governor. “Tomorrow’s a very important day.”

House Majority Leader Joe Aresimowicz, D-Berlin, also has said it’s important that leaders reach a tentative deficit-mitigation deal Thursday if they hope to put it before the full General Assembly in a special session next week.

“We really don’t want to go into next week” without a deal, Aresimowicz said. “The schedules are getting more and more complicated going into the holidays.”

Legislators and Malloy have been scrambling since mid-November to find budget savings ranging from $350 million to $370 million for three purposes:

Legislative leaders insisted Wednesday that, while they don’t have a deal yet, they remain focused on trying to hit that savings target.

“We’re continuing the conversation, and we’re all committed to coming back tomorrow to try to reach an agreement,” said House Speaker J. Brendan Sharkey, D-Hamden.

“If we’re agreeing to come back tomorrow, that’s a positive thing,” added House Minority Leader Themis Klarides, R-Derby. “Where we end up, we don’t know yet.”

Neither lawmakers nor Malloy would discuss any areas of disagreement in the talks.

But the governor did warn in late November that if a deal were not reached soon, he would consider again using his limited authority to reduce the budget unilaterally.

Deficit forecasts for the current fiscal year range from $118 million to $330 million, a relatively small share of the $18.2 billion general fund.

But nonpartisan analysts say that will swell to $552 million next fiscal year and to $1.72 billion in 2017-18, the first fiscal year after next fall’s state elections. 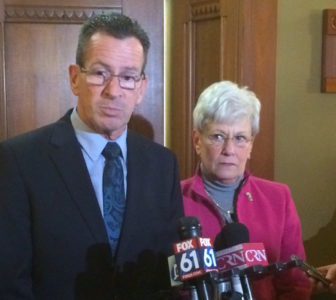 Despite those projections, Malloy and legislators insist they want to provide about $20 million in new business tax relief — a goal driven by GE’s announcement earlier this year that it was exploring moving its Fairfield corporate headquarters to another state.

GE was one of several major corporations that complained loudly this past June when legislators and Malloy agreed on a new two-year budget that increased state taxes by more than $1.3 billion over the biennium.

GE officials have said they will announce their intentions by the end of December.

When asked Wednesday by the Associated Press to confirm a rumor that he was meeting with GE officials on Friday, the governor said, “We try not to talk about these sorts of things.

He added that “GE has been true to its word with respect to having discussions (with the governor’s office.) Those discussions continue. …I think you have whatever information you need.