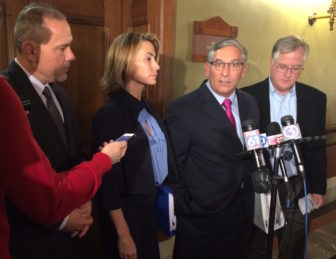 Gov. Dannel P. Malloy and his fellow Democrats in the legislature’s majority said Thursday they believe they had reached the essence of a deal to mitigate state budget deficits and offer modest tax relief to businesses.

Malloy announced he would call the General Assembly into special session on Tuesday in the hope of adopting the package.

Republican legislative leaders said that, while they agreed with the tax relief for corporations, they oppose the overall package because the parties differ over how to stabilize state finances over the long-term.

Neither party disclosed many details of the talks, which began at Malloy’s request last month.

“I think we have an agreement with the governor,” House Speaker J. Brendan Sharkey, D-Hamden, said early Thursday evening.

“I would say to you that, on the financial side, we are — for all intents and purposes — there, or very close, and certainly well within anyone’s reach at this point,” Malloy said shortly afterward.

The governor’s comment, though somewhat optimistic, still didn’t address whether the lack of bipartisan agreement could hold up a final resolution. Malloy did stress repeatedly that he hoped legislators from both sides would continue talking right up until Tuesday.

The top Republicans, Rep. Themis Klarides of Derby and Sen. Len Fasano of North Haven, were appreciative of the Democratic governor for inviting them to participate in bipartisan talks to close growing state budget deficits.

“For someone who’s been critical of Gov. Malloy, I cannot speak more highly of him,” Fasano said, adding that Malloy was “terrific” at getting all sides to consider new options and work toward compromise.

Though officials were tight-lipped about most details, GOP legislators had proposed last month that the state ask employee unions to consider a series of new restrictions on labor costs which could save Connecticut hundreds of millions of dollars year after year.

Republicans also were wary coming into the talks that Democrats might reach too often for short-term fixes that don’t do enough to reduce deficits that grow larger each year into the future.

Deficit forecasts for the current fiscal year range from $118 million to $330 million, a relatively small share of the $18.2 billion general fund.

But nonpartisan analysts say they will swell to $552 million next fiscal year and to $1.72 billion in 2017-18, the first fiscal year after next fall’s state elections.

Malloy hinted earlier this week that some legislators were considering moves that might not reduce costs over the long haul.

For example, a program could be “cut” from the general fund, by shifting it into secondary budget funds supported with assessments on the insurance or banking industries.

In other instances, programs are moved into one of the hundreds of special funds or accounts outside of the budget entirely.

Connecticut has a particularly volatile revenue system because it relies heavily on income tax receipts that fluctuate greatly depending upon its financial services sector and the overall fiscal health of Wall Street.

The $406 million currently in the Rainy Day Fund not only represents less than one-fourth of the projected deficit looming after the next state election, but it’s also equal to only about 2 percent of annual operating expenses.

Still, legislators and the governor wouldn’t give up entirely on the chances of a bipartisan deal coming together by Tuesday, even if they felt it wasn’t likely.

“There are several days before next Tuesday, even though at this moment there is not enough agreement on major policy decisions,” Klarides said. “There will certainly be continued conversations before we go in, in the hopes that something may change.”

“We’d at least like to keep open the possibility that we could come together on the few sticking points,” Sharkey said.

Legislators did confirm a few components of the plan.

Besides mitigating the deficits to some extent, legislators said they hoped to find savings to finance modest tax breaks, worth in the range of $10 million to $20 million, for corporations.

This was done largely in response to objections raised by Fairfield-based General Electric and other major companies last June when the Democratic majority and Malloy approved a new, two-year state budget that included a wide range of tax hikes worth $1.3 billion over the biennium.

Malloy is expected to meet Friday with GE officials regarding their ongoing examination of whether to move their corporate headquarters. Company officials have said they would announce by the end of December whether they will take their headquarters out of Connecticut.

“All the Republicans…clearly are supportive of the business package the governor has put forward,” Fasano said, adding that it’s “important that we show that united front.”

And legislators from both parties also said they wanted to find some savings so they could afford to reverse a least a portion of the $103 million in emergency budget cuts Malloy ordered in September. A large portion of those cuts fell on hospitals and on services for the mentally ill and developmentally disabled.

House Majority Leader Joe Aresimowicz, D-Berlin, said the tentative deal would restore some funding to “some of the problem areas we have heard about from our caucuses.”