The Every Student Succeeds Act — signed into law earlier this month by President Barack Obama — still requires testing students annually to measure achievement but gave back to states the authority to determine how to turn around struggling schools. 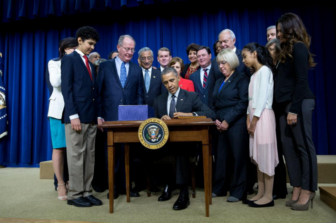 President Obama signs the new education bill that replaces No Child Left Behind.

The legislation also included new funding formulas and caps for the main education grants states receive from Washington, starting with the 2017-18 school year.

The changes are a mixed bag for Connecticut.

Changes to the funding formula for Title II grants, aimed at improving teacher quality, will route more funding to states with higher concentrations of poverty and give less weight to overall student enrollment. Over the last 14 years states have been protected against losing money even as enrollment has shifted.

Nonpartisan Congressional researchers estimate the changes mean funding for Connecticut to improve teacher quality will decline every year by about $700,000, culminating in a loss of $4.8 million – a 23 percent cut – in the seventh year.

“There is going to be a major shifting of funds,” said Joel Packer, the executive director of the Committee for Education Funding, a Washington, D.C., based think tank. “It’s going to shift money over time from the Northeast.”

Six states’ grants will shrink by a larger percentage than Connecticut’s, assuming Congress appropriates $2.3 billion each year for these grants and does not move to lift the cap. New York is set up to lose one-third of its funding, or $60.9 million. Michigan and Pennsylvania are each set up to lose about $24 million, about one-quarter of their funding.

California, Florida, North Carolina and Texas are set up to gain the most.

“This is a big deal,” U.S. Sen. Richard Burr, R-North Carolina, said in a press release the day the legislation passed the U.S. Senate, 85-12. “Making sure that low-income children regardless of where they live get their fair share of funding could be the education civil rights issue of our generation. Congress has the obligation to properly fund schools that need this funding the most.”

“This is Congress stating, ‘Here are the levels that these programs should be funded at,'” said Packer.

But Connecticut U.S. Sen. Chris Murhy, who was on the congressional conference panel that crafted the final version of the bill, which replaced the controversial No Child Left Behind education law, said there still is time to reverse the cuts headed for Connecticut’s schools.

“That will be a question for the budget,” Murphy, a Democrat, said during an interview.

Connecticut was spared a larger cut proposed to the main grant directed at schools with high concentrations of poverty to fund things like after-school and summer programs and reading instruction specialists. 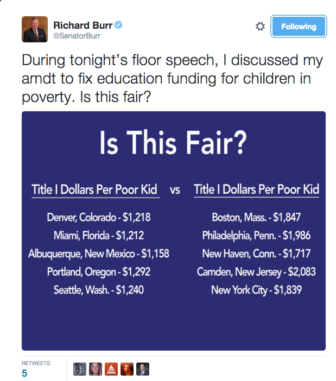 A tweet from Sen. Burr about Title I federal funding.

North Carolina’s Sen. Burr had been pushing for an overhaul to Title I grants that would redirect federal funding from Northeast states to Southern and Western states and to smaller districts with high poverty rates.

In a post on Twitter, Burr focused on the disparity in how Title I grants are currently allocated, highlighting that New Haven receives $1,717 per poor student while Denver gets $1,218.

The $18 million Connecticut stood to loose under that plan didn’t make it into the final bill, which was overwhelmingly approved by the Congress. Instead, Connecticut’s Title 1 funding is set up to remain about level over the next four fiscal years.

In recent years, these Title I and II grants have accounted for more than 80 percent of the federal funding Connecticut received under the law just overhauled by Congress.

It’s unclear whether the state will continue to receive $12.5 million in federal funding it gets each year because it won a Race to the Top competition to expand preschool enrollment.

The bill made federal funding for preschool a guarantee – and not dependent on special set-aside programs like Race to the Top – but the legislation says the money will be allocated to states on a “competitive” basis.

Connecticut will be eligible to apply for funding to further expand preschool starting in the 2017-18 school year, but it has not yet been determined whether the current funding, which pays for 280 children to attend preschool, will remain.

“It’s a little unclear. We are going to have to wait and see on the regulations,” said Packer, of the education funding think tank.

It’s also unclear how funding for programs in Connecticut that support English Language Learners and school choice programs fare in the bill.

Overall, the massive bill increases the caps for federal funding for education by $2.7 billion over the next four years, a 12 percent increase in annual spending over current levels.

“These are not gigantic increases,” said Packer, who expects adopted budgets in future years to closely align with the levels approved in the education bill.