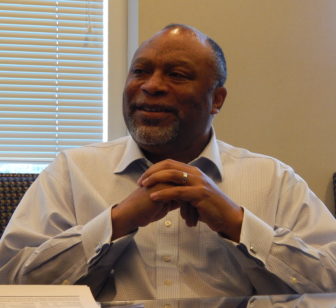 Although Bremby was a finalist to become city manager of Lawrence, Kan., the city commission on Thursday selected another candidate – Thomas Markus, city manager of Iowa City, Iowa.

“While I appreciate the consideration afforded by the Lawrence City Commission, I have affirmed to Governor Malloy and the staff of DSS that I’m here for the longer haul,” Bremby said in a statement Thursday. “With the Governor’s support over the last five years, we’ve moved a major state agency forward in terms of business modernization and vastly improved operational outcomes in key programs – and I’m proud to work with some of the most dedicated public servants I’ve ever had the honor to know.”

Bremby said previously that he was recruited to be a candidate for the job in Lawrence, where he lived for most of his adult life. He spent nine years as Lawrence’s assistant city manager and later led the Kansas Department of Health and Environment for eight years.

Gov. Dannel P. Malloy recruited Bremby to become DSS commissioner in 2011 at the recommendation of then-U.S. Department of Health and Human Services Secretary Kathleen Sebelius, who had been Bremby’s boss when she was governor of Kansas.

This is the second time in two years that Bremby was publicly named a finalist for a city manager post. In 2014, he was a finalist to become city manager in Fort Worth, Texas, but later withdrew from consideration.