After a few dodges, Malloy administration vows not to seek tax hikes 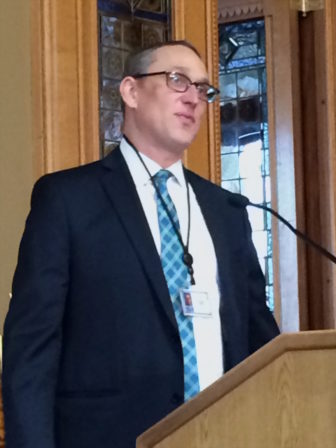 Benjamin Barnes, secretary of the Office of Policy and Management, speaks at the budget forum sponsored by Connecticut Voices for Children Tuesday.

Updated at 2:12 p.m. to include statement from Malloy.

After some initial coyness about the state budget revisions Gov. Dannel P. Malloy must submit to legislators next week, the administration confirmed Tuesday afternoon it would propose no tax hikes.

“The governor is not proposing tax increases, nor will he support them,” Malloy spokesman Devon Puglia said. This is a tough budget that will require a different solution.”

Malloy’s budget director was unusually coy Tuesday on the prospect of tax increases earlier in the day.

“I don’t expect any (tax increase) proposals next week,” Office of Policy and Management Secretary Benjamin Barnes told a crowd of more than 100 who attended Connecticut Voices for Children’s annual state budget forum at the Capitol.

Malloy must recommend adjustments to the preliminary budget for the 2016-17 fiscal year to the legislature on Wednesday, Feb. 3.

But the budget director also noted in his comments at the forum that the regular 2016 legislative session convenes that day, and legislators will be submitting their bills on state finances and other topics.

When asked afterward to clarify his prediction, Barnes said he only was referring to what legislators might do next week. This is an election year for the General Assembly, and the budget director noted that legislators traditionally are reluctant to raise taxes while seeking re-election.

So what about the governor?

“I’m not going to speak about the governor’s budget,” Barnes said.

Malloy also was coy when interviewed Monday by The Mirror.

Told recently that the business community was fearful of some type of business-tax increase, Malloy suggested their concerns were misplaced, but he refused to categorically rule out any increase. Instead, he smiled and counseled patience: “My budget will be out next week.”

One year ago at this time, Malloy — who had campaigned on a pledge not to increase taxes — proposed a new biennial budget that raised tax receipts by about $360 million while canceling previously approved tax cuts worth close to $500 million over two years.

The governor had made his no-tax-hike pledge back then despite warnings from nonpartisan analysts that state finances were on pace to run $1.3 billion in the red — more than 7 percent — in the first new fiscal year after the 2014 gubernatorial race.

Barnes was asked both during the forum, and afterward by reporters, about the latest projected shortfalls, and whether they warrant a discussion now about raising state taxes.

The budget chief attacked the issue from both sides.

“I think the notion that we are foreseeing red ink in fiscal 18 is preposterous,” Barnes said, adding that no one in state government can fairly project economic or revenue growth rates that far out.

But the legislature’s nonpartisan Office of Fiscal Analysis isn’t the only agency warning about a big post-election shortfall. Barnes’ office projects a nearly $1.3 billion shortfall built into state finances in 2017-18.

In fact, Barnes warned the forum that the state’s revenue projections, which were downgraded last week both for the current fiscal year as well as the next three, were likely to drop again in April. Nearly 40 percent of Connecticut’s income tax receipts are tied to investment-related earnings, and the stock market has suffered one of its worst opening months ever to begin 2016.

“We have a lot of risk,” Barnes said. “We don’t know what’s going to happen.”

Nonetheless, Barnes said he isn’t “suitably comfortable” with these forecasts “for us to take immediate action” to close them.

So does that mean no tax hikes will be proposed, even smaller ones that could balance 2016-17 and reduce the larger deficit projected for after the election?

“Ruling out tax hikes is one of those things people often do,” he said. “But … I understand it’s going to be a tough year, so we’ve all got to keep our options open. And I’m not going to hem anybody in by making predictions before the whole thing’s started.”