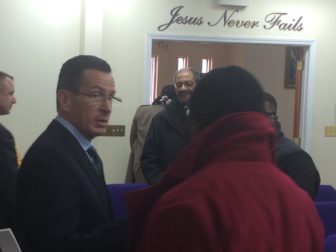 Gov. Dannel P. Malloy exits the Citadel of Love, a church where he outlined his Second Chance 2.0.

Gov. Dannel P. Malloy came to the Citadel of Love, a black church in the North End of Hartford, on Thursday to roll out “Second Chance 2.0,” a second round of proposals to negate the permanence of criminal mistakes, especially those committed by the young.

With an audience of interested clergy, supportive politicians and dubious bail bondsmen, Malloy said he will ask the legislature next week to curtail bail for minor crimes, treat many defendants younger than 21 as juveniles and broaden the reach of a record-expunging youthful offender law.

“It’s time for us to take a different approach to adolescents 18 to 20, our young people, in Connecticut,” said Malloy, fleshing out details of proposals first broached in a speech last fall and explored in subsequent appearances. “We know what works. Let’s implement it.”

The governor’s initiatives are both sweeping in scope and incremental in implementation: He would raise the age in phases over three years, as was the case when Connecticut previously raised the age of criminal responsibility from 16 to 18.

“We need to reshape our system. If you look at other industrialized countries, they concentrate to a much higher degree on treatment, on the traumas that may been inflicted in someone’s life and getting someone back on the straight and narrow,” Malloy said. “In Connecticut, in the U.S., particularly over the last 50 years, we’ve been highly concentrated on permanent punishment.”

If approved by the legislature, the jurisdiction of juvenile court would increase from age 17 to 18 on July 1, 2017, and to 19 in 2018 and 20 in 2019. The youthful offender program, which can expunge criminal records of some defendants who stay out of trouble for four years, would be expanded to ages 18 and 19, beginning this fall.

At Harvard, hints of what Malloy intends on justice reform

A governor, a commissioner and a new take on prison‘Second Chance’ reforms become law in Connecticut

Malloy later told the Juvenile Justice Policy and Oversight  Committee, whose members include police, judges, lawyers and other practitioners, it would have the next year to anticipate and plan for issues raised by giving juvenile courts a new class of defendants, deemed “young adults.”

William H. Carbone, a committee member who held a series of high-ranking criminal-justice positions and now teaches at the University of New Haven, told his colleagues that the Obama administration will be closely following how Connecticut implements the changes.

“They want to see this done well in Connecticut, because they think it can be a model for the rest of the country,” Carbone said.

Other than objections from bail bondsman, who see their client base shrinking under Malloy’s plan, opposition has been muted since the Democratic governor first broached the concepts last fall, drawing national attention as the first governor to propose emulating an approach in Europe.

Senate Minority Leader Len Fasano, R-North Haven, who watched Malloy’s presentation to the juvenile oversight committee, said he was inclined to support elements of the plan, such as bail reform and being more generous in expunging the criminal records of young offenders who stay out of trouble. 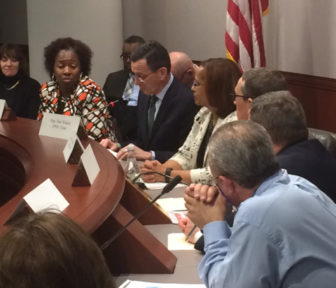 Gov. Dannel Malloy presenting his proposal to members of the Juvenile Justice Policy and Oversight Committee.

But he wanted to know more about the ramifications of creating a new “young adult” class of defendants subject to juvenile court jurisdiction. For example, he said, would young adults be off limits to police questioning with a guardian, as is now the case with juveniles under 16? Is it consistent to allow 18-year-olds to marry and sign contracts, but to treat them differently in the criminal justice system?

“I am not sure I am there on that. I want to look at it,” said Fasano, who intends to propose his own urban agenda in the 2016 session that opens Wednesday.

At the Citadel of Love on Barbour Street, the governor was introduced by the church’s pastor and founder, Marichal Monts. The congregation includes Rep. Brandon McGee, D-Hartford.

“Most of the people I counsel and minister to are people who have cases,” Monts said. “What the governor is doing, I am really, really excited. I think people are going to get a better opportunity to have a better life.”

Mayor Luke Bronin, who was the governor’s general counsel, and Sen. Eric Coleman of Bloomfield and Rep. William Tong of Stamford, the Democratic co-chairs of the Judiciary Committee, stood with Malloy.

Malloy said his administration was acting on research and data showing that how the criminal justice system responds to an initial interaction with young offenders can weigh heavily on recidivism.

The governor said being jailed for as little as eight days can be life-changing, often costing a defendant a job and, in some cases, housing.

Malloy would prohibit a judge from setting a cash bail for anyone charged with a non-violent misdemeanor, unless a judge determines the accused poses a danger to another or was charged with failing to appear in court.

About 400 of the 550 prisoners now being held on bonds of $20,000 or less are charged with misdemeanors. Freedom can be purchased by paying a bail bondsman a non-refundable fee of anywhere from $250 to $2,000. In return, the bail bondsman is responsible for the bail if the defendant fails to appear.

Malloy said most defendants should not be locked up for want of $250.

“We’re paying $120 a night” for incarceration, Malloy said. “If they’re not a risk, they shouldn’t be there. If they are a risk, then I have no problems with that.”

In the audience was Danny Baba, the owner of Ali Baba Bail Bonds. He said he agreed with the governor’s basic message about providing second chances, but he said Malloy was minimizing the impact of his bail proposal when he talked about low-risk defendants.

Most defendants free on bail who fail to appear are out on bonds of $20,000 or less, Baba said.

Baba acknowledged that many eventually appear after missing several court appearances. But he said bail bondsmen provide a service by assessing risk before bail is granted and by finding recalcitrant defendants and bringing them to court.

The federal courts do not use bail bondsmen. If defendants are judged a flight risk or a public danger, they can be jailed without bail under a federal preventive detention law. If not, a judge can release them without bail or condition their freedom on a relative pledging property or cash if they miss a court appearance.

Connecticut would need to amend its state constitution to allow preventive detention. Except for capital offenses, all prisoners have a constitutional right to bail “by sufficient sureties” prior to conviction.

Malloy has asked the state Sentencing Commission to review the constitution, but he is not proposing a constitutional amendment.

David McGuire, the legislative and policy director of the ACLU of Connecticut, said the governor was taking the right approach.

“Bail should be based on a person’s flight risk or danger to society, not on the money in his or her pocket,” said McGuire, who also attended the news conference in church. “Young people who make mistakes should have a second chance, not find the deck stacked against them for the rest of their lives. We look forward to learning more about the details of both of the governor’s proposals.”