At Harvard, hints of what Malloy intends on justice reform 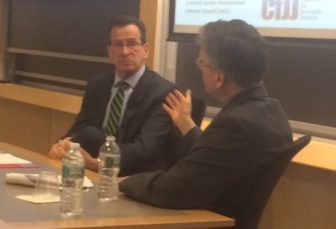 Cambridge, Mass. – His audience at Harvard included students, activists, a pediatrician, lawyers and a juvenile court judge. Most lavishly praised Gov. Dannel P. Malloy for his proposed criminal justice reforms, especially an idea to treat defendants as juveniles until they are 21.

But Lloyd Macdonald, a former federal prosecutor who retired last year after 10 years as a Superior Court judge, reminded Malloy this week how one of the Bay State’s earlier reforms put a convict named Willie Horton on the street in 1986, haunting the 1988 presidential campaign of the state’s governor, Michael S. Dukakis.

Horton committed a brutal rape while free on a weekend furlough, a policy instituted to ease prisoner re-entry into society, one of the foundational principles of Malloy’s latest efforts. The crime became the subject of an iconic attack ad. Macdonald’s point: The political price can be high for criminal justice failures.

“I think you need to be more nuanced rather than suggest that the answer to crime is to substantially decriminalize it or the very demographic responsible for it,” Macdonald said, referring to younger defendants Malloy and other reformers would treat differently, more leniently.

Malloy sat in the well of the Weiner Auditorium, a compact amphitheater at the Harvard Kennedy School, with Vincent Schiraldi, a senior research fellow at the school’s program in criminal justice policy and an influential voice in a gathering national movement to rethink the definition of juvenile. Watching from the audience were several Malloy aides who thought Macdonald condescending.

A governor, a commissioner and a new take on prison

“I’m not saying we look the other way. I’m saying that we respond differently,” Malloy said, his voice even. “Those are two very different things.”

Exactly how differently Malloy intends Connecticut to respond to crime by younger offenders – he only gave a broad outline in a speech last fall, which instantly drew attention from Schiraldi and other reformers – is expected to become clearer in a presentation the governor is tentatively planning to make Thursday in Hartford to the state’s Juvenile Justice Policy Oversight Committee.

The General Assembly opens its 2016 session a week later, when the Democratic governor can begin to gauge legislators’ appetites for further change after a steady diet of criminal-justice reforms during Malloy’s five years in office.

Under Malloy, Connecticut has decriminalized marijuana possession, repealed mandatory minimum sentences for drug possession and implemented a previously adopted law raising the age of criminal responsibility from 16 to 18.

Connecticut was a laggard in raising the age to 18, despite a growing consensus that the brain and its capacity for mature decision-making evolves past the teen years, perhaps as old as age 25, and that treating teens as adults in court is counterproductive.

Malloy’s push to go to 21 is described by Schiraldi, who ran the juvenile correction system in Washington, D.C., and was the commissioner of probation in New York City, as a game changer. An Illinois woman in the audience at the Kennedy School told Malloy it already was part of the public policy debate in her state.

“Somebody has got to move us to the next step,” Malloy said.

His speech last fall at the University of Connecticut law school has drawn invitations to speak from the Council of State Governments’ Justice Center, the Tow Foundation, the Vera Institute of Justice and the MacArthur Foundation.

On Monday night, the Kennedy School put the governor in a forum where academics and practitioners mix, sharing research and ideas.

There are no stories about murders or robberies that didn’t happen because of the troublesome 16-year-old who was spared expulsion and jail and diverted from more serious crime. There are only statistics and research by people like Schiraldi, whose work is closely followed by the Obama administration.

An academic paper he co-authored last fall, “Community-Based Responses to Justice-Involved Young Adults,” argues for “a more age-responsive system” that limits pre-trial exposure to jail. “Our central recommendation,” they wrote, “is that the age of juvenile court jurisdiction be raised to at least 21 years old with additional, gradually diminishing protections for young adults up to age 24 or 25.”

That the Obama administration is at least sympathetic was probably reflected in a foreword written by Karol V. Mason, the assistant attorney general who oversees the Office of Justice Programs at the U.S. Department of Justice. Mason wrote that the paper “raises important questions” and outlines “a number of thoughtful recommendations aimed at making our justice system more developmentally appropriate in its response to young adults.”

Malloy wants to do more than raise the age.

He told the audience he will propose sweeping bail reform, which his staff says cannot be fully realized without a constitutional amendment in Connecticut. He would like to emulate the federal system, where those deemed to be a flight risk or a public danger can be held in preventive detention, and most others are freed to await trial with minimal bail.

But Malloy intends to push now for a reform permissible under the state constitution: An end to cash bail for misdemeanors, other than those stemming from cases of domestic violence. 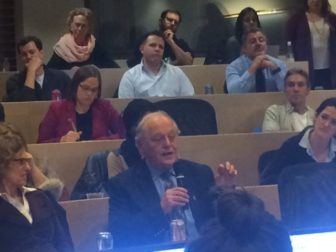 One man sitting in the front row loudly applauded. Others eventually joined him.

The man who led the applause was Jay D. Blitzman, the first justice of the Middlesex County Juvenile Court in Lowell, Mass., the chair of the Massachusetts Bar Association’s juvenile practice committee and, before becoming a judge, the founder of the Youth Advocacy Project, a legal services group in the Roxbury section of Boston.

Bail inevitably comes up in any discussion of juvenile justice reform. Research shows that young people who experience even a short stay in jail after arrest, or even on school suspension or expulsion, are much more likely to end up in prison.

More than 500 pretrial defendants are jailed in Connecticut, if only because they could not afford a thousand dollars, or in some cases as little as $250, to pay a bail bondsman, Malloy said.

He was asked if he read the New Yorker’s Kafkaesque account of Kalief Browder, a 17-year-old arrested and jailed for want of $3,000 bail for three years on a robbery charge, much of it in solitary confinement. Browder refused deals that would have meant his release in return for a guilty plea. The case finally was dismissed, but Browder returned home a damaged 20-year-old. Two years later he was dead, a suicide.

Malloy nodded. He knew the case.

So, it turns out, did President Obama. He cited Browder in a Washington Post op-ed piece Tuesday explaining his decision to restrict the use of solitary confinement for juveniles in federal facilities.

Blitzman, the juvenile court judge, said Malloy’s proposals should not be conflated with those attempted in the 1970s and 1980s, when rising crime rates left the public intolerant of policies focused on the rehabilitation of offenders.

Malloy may be sailing into uncertain waters, but he is doing so with a favorable wind: Crime rates are falling nationally and even faster in Connecticut. A report issued this month says arrests in Connecticut are down 31 percent since 2009 and index crimes tracked by the FBI are at their lowest since 1967 and down 28 percent since 2008. And the governor is supported by a body of research that did not exist when Lee Atwater, the strategist behind George H.W. Bush’s 1988 campaign, made Willie Horton a household name.

The governor agreed with Blitzman. He said the rewards of diverting younger defendants from adult court, saving them from life-changing felony records and stays in adult prison, are worth the political risk that one of them will use their second chance to commit a serious crime. And he rejected the suggestion that Willie Horton cost Dukakis the election.

“He lost because he didn’t respond well. And he couldn’t make an argument,” Malloy said, sitting in a school where Dukakis has lectured and a summer fellowship for gubernatorial staffers is offered in his name. “He blew it. And I love the governor.”