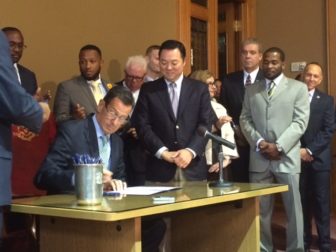 Gov. Dannel P. Malloy joined some of the nation’s most conservative governors Thursday by signing legislation intended to lower incarceration rates for non-violent crime, a reversal of the get-tough-on-crime trend that produced an explosion in prison populations.

Malloy promised that his “Second Chance Society” bill, which eliminates prison as a punishment for many drug possession crimes, was a first step in addressing fiscal and social costs of incarceration, a mission supported by fiscal conservatives and social liberals.

Malloy hinted that rehabilitation would become a stronger element of the prison mission in Connecticut, saying he was impressed to learn during a prison tour of a maximum-security prison in Germany that 25 percent of the staff was dedicated to preparing inmates for release.

Governors around the nation have concluded that tougher drug sentences and a prison building boom were overreactions that have been costly to states, while leaving young drug offenders with records that compromise their ability to get scholarships, housing and jobs.

The Democratic governor waited until the first year of his second term to make sentencing reform a legislative priority, trailing Republican governors in red states, where sentencing reform has proven to pose fewer political dangers.

“The list isn’t that long, but there are more red states. I think it is easier,” Malloy said. “If you look at some of the reticence initially in the legislature, it was that people were afraid they would be called weak on crime, when actually this is strong on crime and has proven itself to be strong on crime.”

The Second Chance bill was passed in special session with the support of the Republican minority leaders, Sen. Len Fasano of North Haven, and Rep. Themis Klarides of Derby, whose votes greatly lessen the value of the bill as a wedge issue in 2016 legislative races. 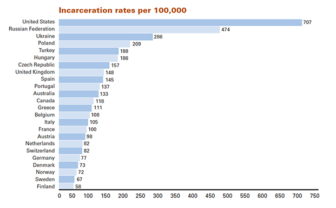 From “The Growth of Incarceration in the United States: Exploring Causes and Consequences,” The National Research Council, 2014.

“This is what happens when you have conversations and exchange ideas across party lines, when you bring to the table issues that everybody is facing and say, ‘How can we solve this to the betterment of the state of Connecticut?’ ” Fasano said during the ceremony. “We looked at it and said drug addiction is a health issue, not necessarily a criminal issue.”

The legislation signed Thursday in a ceremony in the ornate Old Judiciary Room of the State Capitol reclassifies most drug possession crimes as misdemeanors and repeals the two-year mandatory-minimum sentence for possession within 1,500 feet of a school or day care. For a second possession offense, the court could order drug treatment. Subsequent offenses could be charged as felonies.

The measure also streamlines the process for obtaining paroles and pardons.

Peter Gioia, an economist with the Connecticut Business and Industry Association, was among those who crowded around Malloy during the bill ceremony. He said the interest of the state’s largest business lobbying group was threefold.

“First, it’s the right thing to do. Second, it’s something that’s important in terms of taking people and changing their lives. And third, it’s important because it’s a fiscal issue,” Gioia said. “It costs $51,000 a year to lock somebody up. It costs $15,000 a year to send them to UConn. We need to send more people to UConn and fewer people to be locked up.” 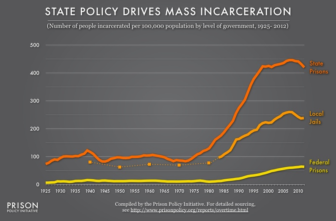 Prison populations were relatively stable until the 1980s.

The U.S. now incarcerates more than 1.5 million people in state and federal prisons. The incarceration rate is the highest in the industrialized world, costing about $60 billion annually, up from $12 billion 20 years ago.

Researchers say prison populations ticked upwards in the 1960s and 1970s, then exploded after the crack epidemic of the 1980s.

The state spends more than $700 million of its annual $20 billion budget on its prison system, which employs about 6,300.

The Second Chance initiative was one of two major criminal justice bills that stalled in the regular session, which ended June 3, only to be revived with bipartisan support in a one-day special session. The other was “An Act Concerning Excessive Use of Force.”

It encourages police departments to increase minority recruiting, provides funding for police body cameras and sets standards for the independent review of deaths resulting from use of force by police.

The Second Chance bill was supported by a conservative think tank in Connecticut, the Yankee Institute for Public Policy, and Grover Norquist, the godfather of the national tax cut movement, as well as the legislature’s Black and Puerto Rican Caucus and the ACLU.