Malloy: Raise the age for juvenile justice system to 20 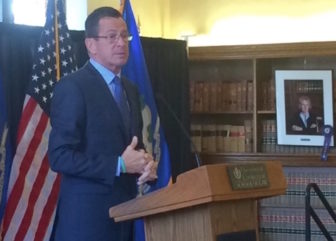 A 20-year-old who gets into a fight or is caught stealing faces serious jail time if convicted.

In a far-ranging policy speech about bail reform and juvenile justice Friday, Gov. Dannel P. Malloy said he no longer wants that to be the case.

His proposal would divert thousands of people aged 18 to 20 from the adult corrections system and would instead treat them as juveniles. And he indicated that he wants to consider alternative ways to handle those under 25 who commit less-serious offenses.

“I would like to begin a statewide conversation about raising the age of eligibility for our juvenile justice system and considering how we think about our young offenders,” Malloy said at the University of Connecticut School of Law in Hartford. “Let’s consider this: age within our laws and criminal justice system is largely arbitrary…You can commit a nonviolent offense at 17 without a criminal record, but if you’re 18 and you commit the same crime, it lasts a lifetime.”

Malloy also would overhaul the bail system, always a politically fraught undertaking at the General Assembly, with the intention of ensuring that no one is jailed for want of a minimal bail, a change that one policy analyst said could shrink the state’s jail population by up to 1,000 inmates.

He was the keynote speaker at an all-day symposium sponsored by the Connecticut Law Review. His audience included judges, prosecutors and the commissioner of correction, Scott Semple.

Malloy, a Democrat who won bipartisan passage earlier this year for a Second Chance Society initiative aimed at reducing incarceration for non-violent crimes, proposed that the records of those under 25 who commit less severe offenses be shielded from public disclosure and possibly expunged.

Malloy said such a change would “wipe the slate clean” for low-risk offenders that have not matured entirely.

“Is it right that that 17 year-old can have a second chance but a 22 year-old cannot? This is the question that we should collectively answer,” Malloy said.

He intends to propose a package of reforms to the General Assembly for its 2016 session, which convenes in February.

The changes Malloy proposed would make Connecticut the first state in the nation to raise the age for its juvenile justice system past 18. (See below for a state-by-state breakdown of who is considered an adult) He said one inspiration for the idea came on a trip with Semple to Germany, where offenders are treated as juvenile up to age 20.

“This is uncharted territory in terms of going that far,” said David McGuire, the legislative and policy director for the American Civil Liberties Union of Connecticut. “It makes a lot of sense. It will save a lot of lives. It will really impact an entire generation.”

In 2007, state lawmakers changed state law so that 16- and 17-year-olds charged with less serious offenses enter the juvenile justice system, where they are often provided with a range of community-based supports, rather than automatically being sent to the adult court system. 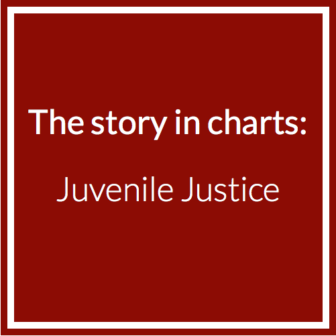 A study commissioned by the state before the age was raised to 18 found that up to 75 percent of teenagers sent to the adult system were receiving no rehabilitative services. And the services other teens received were subpar, according to the study.

Malloy said the current age is still too low.

“It’s time to think about changing the artificial barriers that we imposed. It’s time that we get it right. For that reason we need to take a different approach for these young adults between the ages of 18 and 24,” Malloy said, pointing out that many of these young offenders are victims of trauma.

Research also shows the human brain does not reach full maturity until at least the mid-20s, meaning young people don’t fully understand consequences for their actions and are more susceptible to being influenced. The U.S. Supreme Court cited similar research in a trio of decisions where they eliminated the death penalty for juveniles and restricted state lawmakers from requiring mandatory life sentences without the chance of parole for juveniles.

The governor’s proposal comes as advocates have been raising concerns about the conditions of incarceration at the Connecticut Juvenile Training School, the state’s jail for juveniles in Middletown. No decisions have been made about  whether incarcerated 18- to 20-year-olds will be held at CJTS or J.R. Manson Youth Institution, the Cheshire prison where male offenders age 18 to 21 are currently sent.

Semple, the career prison employee appointed by Malloy as commissioner, already has transformed one men’s prison into a facility with the sole focus of preparing inmates for release, a concept he is expanding to prisons that house women and young offenders

“It is a smart approach,” Semplesaid.

McGuire, the ACLU analyst, said Malloy’s proposals come amid a political and policy reappraisal of get-tough approaches to crime, including long mandatory sentences for drug offenses, that swelled prison populations in the U.S.

Semple is very much part of that movement, he said.

“There’s been kind of a convergence in terms of having a commissioner of correction who gets reform, who deeply cares about keeping recidivism rates down,” McGuire said. “This is a not a correction official who is trying to keep prisons open.”

A falling crime rate — the FBI recently pronounced Connecticut to be at a 48-year low in crime — has provided a degree of political cover for Malloy and others working to lower incarceration rates.

Nationally, the reform effort has been bipartisan, with conservative governors embracing policies that are driving down prison populations.

House Speaker J. Brendan Sharkey, D-Hamden, noted that the conservative Koch brothers have found common cause with the administration of President Obama on sentencing reform.

“The tide has turned in terms of public opinion,” he said.

Connecticut has closed three adult correction facilities since 2010. The current budget assumes the closing of a fourth.

With juvenile incarceration on the decline in Connecticut, the state closed the pre-trial detention center in New Haven a few years ago.

Advocates recently called on the state to close the juvenile jail for convicted youth in Middletown and replace it with smaller regional secure facilities so youth can be closer to their families.

Michael P. Lawlor, the governor’s criminal justice advisor, said during an interview that the administration is weighing its options given the state’s jails that house these young offenders are not close to being full.

“We have a lot of flexibility now,” he said.