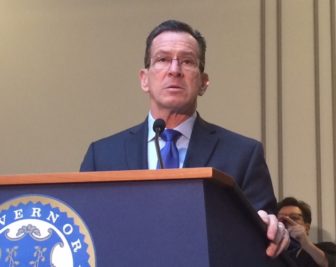 Gov. Dannel P. Malloy warned Friday that the spending plan he will offer state legislators next week will be a “very austere” budget with no tax hikes.

The Democratic governor, who needs to close a deficit projection topping $500 million in the preliminary budget for 2016-17, also all but ruled out use of the state’s modest emergency reserve.

“It’s an austere budget. I think everybody knows that,” the governor told reporters after the State Bond Commission meeting in the Legislative Office Building.

Both the Malloy administration and the legislature’s nonpartisan Office of Fiscal Analysis say there is a deficit topping $500 million built into the preliminary $20.4 billion budget adopted last June for 2016-17.

The governor, who signed tax increases worth more than $1.3 billion over the biennium last June, repeated Friday he would propose no tax increases in his budget revisions Wednesday.

And while Malloy offered few hints on where he would cut, he did offer one big clue.

When asked whether the emergency cuts he ordered in September to close a shortfall in the current fiscal year might offer a blueprint of where he would look for savings in 2016-17, the governor responded: “It’s a start.”

Those emergency cuts fell most heafvily on social services, hospitals, and public colleges and universities, though they touched most discretionary areas of spending, excluding municipal aid.

Connecticut does have $406 million in its emergency reserve, commonly known as the rainy day fund. This is a modest amount equal to less than 2.5 percent of annual operating costs. Comptroller Kevin P. Lembo insists the state needs to develop a 15 percent reserve to guard against economic downturns.

And nonpartisan analysts say a much larger deficit, topping $1.7 billion, looms in the fiscal year that begins in July 2017.

Still legislatures traditionally have dipped into the rainy day fund in past state election years to mitigate the need for politically risky spending cuts or tax hikes.

When asked whether Connecticut can afford to dip into the rainy day fund now with a billion-dollar-plus shortfall looming after the election, Malloy raised a host of arguments against that option.

He recalled how his predecessor, Gov. M. Jodi Rell, had exhausted a nearly $1.4 billion reserve in the last two years before her term ended in January 2011.

Rell and the legislature left Malloy with no reserve and a record-setting $3.7 billion deficit built into 2011-12 finances.

Rell did that “to avoid having to make the tough decisions that my administration has had to make,” Malloy said.