A quick guide to the 2016 Connecticut General Assembly 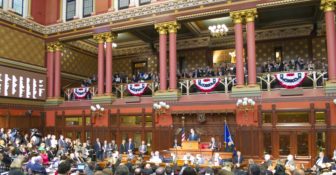 Gov. Dannel P. Malloy delivering a previous budget address in the Hall of the House.

The Connecticut General Assembly opens its annual session today, when the main order of business will be Gov. Dannel P. Malloy, a two-term Democrat who took office in 2011, delivering his sixth budget to a joint session of the legislature. Its constitutional adjournment deadline is midnight May 4.

How to close a projected budget shortfall without raising taxes or gutting vital services or popular programs will be uppermost in the minds of legislators. All 187 seats – 36 Senate and 151 House – are up for re-election in November of this presidential election year.

The Democratic candidate for president has carried Connecticut in every election since 1992, a boost that generally helps Democrats pick up legislative seats. An exception was 2012, when the GOP didn’t lose a seat in either chamber.

Democrats control the House, 86 to 64, with a vacant seat to be filled once a winner is formally declared in Tuesday’s special election to choose a successor to the late Rep. Terry Backer, D-Stratford. A spokesman for the House Democrats said Tuesday night that unofficial results showed Democrat Joe Gresko had won the seat.

What role do the Republicans play?

As the adjournment deadline nears, the GOP minority grows in influence, since it can hold up business – the tradition in Connecticut is unlimited debate – simply by talking. The result in Hartford usually is a measure of compromise, not gridlock.

Earlier in the session, Republicans can shape legislation at the committee level, where there remains a healthy measure of bipartisanship. Ranking members, the title given to the top Republicans on every committee, often develop an expertise matching or exceeding the Democratic co-chairs.

How is it different from Congress?

You mean aside from the absence of gridlock? 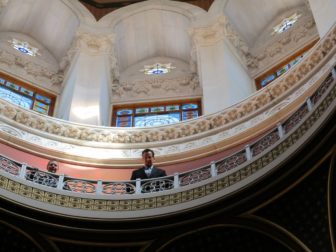 The dome is not on the tour, but Gov. Dannel P. Malloy managed to get access his first year.

Unlike Congress, where legislative sessions last two years, no bill in the General Assembly outlives a regular annual session. Every session starts fresh, with no holdover bills from the previous year.

Nearly all bills are first considered by one of the joint committees of the House and Senate. Each committee has a House and Senate co-chair. Legislative leaders can bypass the committee process, including the requirement for a public hearing, through the emergency certification process. In legislative speak, it’s called an “e-cert.”

Malloy’s proposed budget will be subject to review by legislative subcommittees and public hearings, but the final budget deal usually comes before the full legislature as an e-cert, often in the final days or hours of the session.

One of the biggest differences with Congress is that the General Assembly is a part-time legislature. The majority of legislators are employed outside the Capitol, declaring sources (though not amounts) of outside income as a check against conflicts of interest. Legislative pay begins at $28,000 for rank-and-file legislators, plus an expense stipend of $4,500 for House members and $5,500 for senators. Salaries haven’t changed since 2001.

While part-time, the demands on lawmakers increasingly stretch throughout the year. Last year, the legislature met in special session in June and again in December.

No, the General Assembly has evolved as legislators took steps to assert the institution’s independence of the executive. The legislature is an equal branch of government with the executive in theory, though not always in practice.

The legislature underwent a radical transformation from 1966 to 1972 as a result of a U.S. Supreme Court decision, two constitutional amendments and a reform movement that raised the profile and influence of state legislatures throughout the United States.

In 1964, the U.S. Supreme Court found that the 294-seat state House of Representatives was “malapportioned,” with districts based on municipal borders, not population. The system inflated the political power of small rural communities at the expense of large urban populations.

After a constitutional convention in 1965, the state in 1966 elected a downsized 177-seat House, with each legislator representing an equal number of residents.

The change shifted power from Republican small towns to Democratic cities. In 1965 Republicans controlled the House, 183 to 111. Two years later, Democrats had a 117 to 60 majority.

The legislature downsized again after drawing new districts to reflect the 1970 census, settling on the 151 House seats it has today.

How accessible is the process to the public? 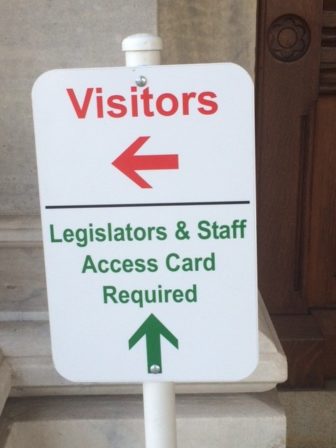 This Capitol doorway directs visitors to the only public entrance. Others do not, so beware.

Compared to surrounding states, the public can have a significant voice, though it competes with organized interests, many of whom are represented by the multi-million-dollar lobbying industry. All bills and public testimony are available on the General Assembly’s web site, which allows people to track bills and see votes.

In the 1980s, the legislature authorized construction of the Legislative Office Building, giving rank-and-file legislators offices for the first time and providing spacious rooms with decent sound systems for public hearings on the first and second floors. The LOB, as it is commonly known, is connected to the Capitol by an underground concourse.

All House and Senate sessions and many public hearings can be watched on CT-N, which streams video on the web and on cable systems, much like C-Span. Sessions can be viewed in person from galleries in the Capitol, a national historic landmark that was restored in the 1980s to its original High Victorian décor.

Free guided tours are available hourly on weekdays from 9:15 a.m. to 1:15 p.m. Free public parking is available in the LOB garage, which can fill up on busy days. Parking on the Capitol grounds is by permit.

The Capitol’s public entry is poorly marked.  A common sight is visitors trying in vain to gain access through four other major doorways, three of which are permanently locked and offer members of the public no clue where they can gain entrance.

The fourth, which faces Capitol Avenue, is open only to legislators and others with office space in the Capitol or LOB. That one does have a sign directing visitors around the corner to the public entrance.

How can I learn more about my legislator?

CTMirror.org has a Political Guide with entries on every state legislator and the six state constitutional officers: the governor, lieutenant governor, secretary of the state, comptroller, treasurer and attorney general. It is searchable by a legislator’s district, name and community. Every entry has biographical information, election history, committee assignments, contact information and links to an official web site and social media accounts.

Biographies of our reporters and editors, with email addresses, Twitter handles and general areas of responsibility, are available here.