After five years, Malloy says he still can be a force for change 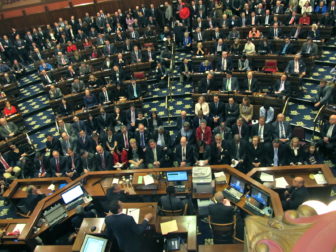 Gov. Dannel P. Malloy cast himself Wednesday in his sixth State of the State address as a vigorous agent of change, not the stolid defender of an entrenched administration wobbling under the weight of bad polling, dwindling revenues and growing debt.

Malloy used variations of the word “change” a dozen times in a half-hour speech in which he was by turns challenging and conciliatory to lawmakers, tagging his audience and himself as sharing culpability for failing to deliver fundamental fiscal change.

“We live in changing times,” he said in his address to the General Assembly. “You don’t have to take my word for it. You are hearing it from your constituents every day – a visceral feeling that our country and our state are not going back to how things were before the Great Recession.”

Malloy, 60, a Democrat beginning the second year of his second term, is attempting the difficult task of asking the public to take a fresh look at a politician who has dominated political life in Connecticut for five frenetic and fatiguing years.

Later this month, he intends to reprise the town hall meeting tour of his first year, when he defended higher taxes, labor concessions, agency reorganizations and spending cuts to erase an inherited deficit of more than $3 billion.

As a new governor, Malloy won points for letting taxpayers vent in forums that took him to 17 cities and towns in 2011. This year, he will arrive with the new burden of bearing – after five years in office – a significant measure of responsibility for the problems he says he still can solve. He did not blame others for Connecticut’s fiscal fix Wednesday, but he noted instead the state’s struggles are hardly unique.

“We in Connecticut are not alone,” he said. “Our neighbor to the north, Massachusetts, is facing a $635 million shortfall. Pennsylvania, not so far from our borders, is facing a $2.4 billion deficit, but still unable to overcome partisan gridlock to even pass a budget. And Louisiana faces nearly a $2 billion deficit next year. Twenty-six other states have not fully recovered peak revenue from the Great Recession.”

Malloy’s problems reach beyond a budget that has labor on edge with talk of layoffs and community-service providers uncertain of how badly they fare under a new competitive approach to funding private non-profits.

He is going back on the road with the news still fresh of General Electric’s decision to move its headquarters from a 1970s campus in suburban Fairfield to Boston’s Seaport District. Aetna has yet to clarify whether it will remain headquartered in Hartford after its acquisition of Humana in Louisville, Ky., which is now before state and federal regulators.

“I think the elephant in the room right now is the business climate,” said Danbury Mayor Mark Boughton, a potential GOP candidate for governor in 2018. “I think people are really rattled, really shaken up by GE. He can spout all the programs that are happening here, but the reality is Connecticut is not viewed as a place to do business.”

Malloy, who at times has seemed in competition with Treasurer Denise Nappier and Comptroller Kevin Lembo, both Democrats, on pension reform, called for a cooperative effort to address a growing pension debt that sharply climbs to a cliff in 2032 – essentially a balloon payment that no one believes is affordable.

“The instability created by this cliff is shaking the confidence of the business community and looming over the next generation of Connecticut taxpayers,” Malloy said.

Rep. Roberta Willis, D-Salisbury, said Malloy can expect a challenge from community service providers and their clients about his assertion that Connecticut needs to budget based on available revenue, not need. Her reaction, like other Democrats’, was measured, but she conceded that a Republican governor delivering the same speech would face condemnation from the Democratic majority.

Republicans had no trouble finding lines to applaud.

“I almost expected him to turn to his left and say, ‘My fellow Republicans,’ and I wish I had one of those change-in-enrollment cards I could have given him on the spot before the mood changes,” said Rep. Arthur O’Neill of Southbury, the longest-serving Republican in the House.

The Republican minority leaders, Sen. Len Fasano of North Haven and Rep. Themis Klarides of Derby, said the speech represents a continuation of what they saw as a willingness last year by Malloy to put a brake on spending.

“It’s not Gov. Malloy who I see as the obstructionist on this,” Fasano said, describing the governor as pushing structural budget changes during negotiations before a special session in December. “The legislature’s majority refuses to go in that direction, and that’s where the issue lies in my view.”

The dynamic Fasano described could foreshadow some awkward town hall forums if the governor calls out his party’s legislative leadership on spending cuts as they prepare to seek re-election.

“I know this is an election year. Too often, it’s easier for all of us to point fingers at one another. But I assure you, there will be time for campaign politics this fall,” Malloy said. “During this session, we can either be part of the solution or we can stand on the sidelines throwing stones. But you cannot do both. We can’t be opposed to tax increases, but unwilling to cut the spending those taxes support.”

Republican State Chairman J.R. Romano, whose job is to help the GOP narrow the Democratic majorities, acknowledged that Malloy’s speech sounded themes attractive to Republicans, but the greater test will be what reforms he can deliver.

“It’s the same rhetoric. It’s Dan Malloy and the Connecticut Democrats who beat the drum of, ‘We’re going to be responsible.’ They never follow through,” Romano said. “They lack the gumption and the courage to make tough political decisions.”

House Majority Leader Joe Aresimowicz, D-Berlin, an employee of one of the state’s largest public-sector unions, said the governor will get a fair hearing in the legislature on his call to cut the size of the state workforce, but there is skepticism about whether Connecticut can lose more than 1,000 employees.

“There has to be a balanced approach. I’m willing to work with him on it,” Aresimowicz said. “I think there are certain areas of state services that we actually have not enough front-line workers, but we have too many managerial staff.”

“He’s trying to set the stage for what everybody knows will be a challenging session with difficult choices to be made and not looking to in any way poison the well in advance and keep things going in an atmosphere of comity and collegiality as long as possible,” he said.

But Looney did not hesitate to say that Malloy’s proposal to have the legislature appropriate blocks of funds for general governmental functions instead of shaping policy with detailed budget line items was unlikely to get far.

As an institution, the legislature fought too hard to win a degree of parity with the executive branch on budgeting, he said. Reforms unanimously passed in 1969 over the opposition of Gov. John N. Dempsey and the Democratic boss, John M. Bailey, created the modern legislature, including a non-partisan staff that provides legislators with research and fiscal analysis.

“We’re very conscious of that,” said Looney, a student of history. “And I think we’re going to be very reluctant to do anything that in any way permanently shifts the balance of power, because the General Assembly had to fight an extraordinary battle.”