Charter schools have escaped Gov. Dannel P. Malloy’s budget knife and are slated for a $9.3 million boost in his newly proposed state budget. 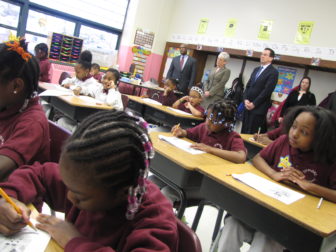 Jumoke Academy charter school students work on an assignment while Gov. Dannel P. Malloy and Lt. Gov. Nancy Wyman watch in the back.

But the Democratic governor also wants a $52.9 million cut in funding for special education, after-school programs, reading tutors and other services in low-performing public schools across the state.

Malloy also wants to rescind an $11.5 million funding increase in the Education Cost Sharing grants for next school year. It is the state’s principal education grant to municipal schools, and the idea of a reduction is not sitting well with some of the lawmakers who helped approve the ECS money last year.

In order to secure the votes needed to pass the two-year budget last June, lawmakers reached a deal to appease both the urban legislators upset that state aid for neighborhood schools was not increasing and the governor, insistent on increased state funding so two new charter schools could open. The budget agreement upped funding for both charters and traditional public schools in each of the following two years.

Rep. Edwin Vargas, D-Hartford, one of the more than dozen concerned legislators last spring, is upset that the governor is now backing off the increase for neighborhood schools but keeping the increase for charter schools. 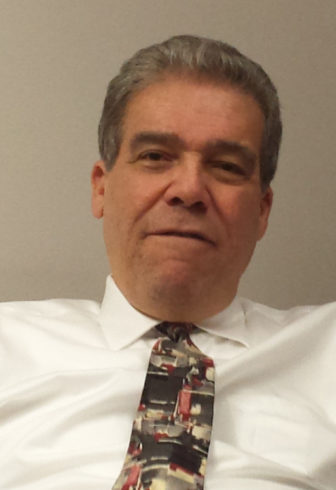 “This was bad-faith bargaining,” said Vargas, a former teacher and union leader. “We swallowed this bitter pill of spending millions to open new charters and the sweetener was the additional money for the local districts. That was the way many of us could bring ourselves to support the budget.”

“It was a very close vote,” he continued, “and had people known that they were going to renege on part of the deal, it might have affected some of the votes on the final budget.”

In Stamford, the governor’s proposal means the public schools will not get the $225,000 increase they would have received, but the new charter school in town will get about $3 million more so enrollment can increase. That charter school and another in Bridgeport are to expand by about 650 seats.

Other towns in line not to receive previously scheduled increases include Danbury ($1 million), Rocky Hill ($450,000),  Shelton ($500,000), Southbury ($600,000), West Hartford ($1.6 million) and Wethersfield ($530,000). These increases would have ensured that every district receives at least 55 percent of what the state’s education funding formula says they deserve when factoring in town wealth and student need.

Education Commissioner Dianna Wentzell says the increase in funding for the charter schools is necessary.

“Those are kids that we made promises to. If we made a promise that a fourth grader is going to have a fifth grade to go to in the same school, then we need to keep that promise,” said Wentzell.

When charter and magnet schools open, they typically do not enroll every grade at once, but phase them in over several years.

Magnet schools are not getting everything they were promised last year, however. Some $18 million in additional funding for about 800 new seats is being cut in this year’s proposal. The administration had no explanation Wednesday or Thursday as to how their proposed cut would affect that growth.

“At a time when public schools across our state are already making difficult decisions about where their scarce dollars should go, further cuts would be a disservice to families and children who have consistently demanded access to more high quality educational options,” he said.

Charter schools are not typically the only ones to get increased funding. State funding for the Education Cost Sharing Grant increased in each of the last four years. School districts this year will receive $168.6 million more than they did in 2012. Charter school funding increased during that time by $59.6 million.

Malloy’s overall $19.87 billion budget imposes cuts on nearly every state agencies in an effort to close a deficit of nearly $570 million.

“Budgeting more prudently can help us protect the services we value most,” Malloy said during Wednesday’s budget address to the General Assembly. “The measures I’ve laid out today aren’t about cutting spending just to cut spending.”

The governor did spare his 5.75 percent across-the-board cuts in some areas of the budget, including in the Department of Motor Vehicles and Department of Transportation. Motor vehicles has come under intense scrutiny in recent months for its mishandling of license renewals and the public facing long wait times.