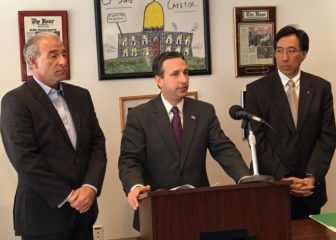 The legislation has the same language that passed the House of Representatives in a 116-32 vote last May. Under the bill’s provisions, electric car manufacturers could sell their cars at up to three locations in the state.

“The world changes, and laws have been static for a long time,” Duff said during a press conference Tuesday morning. “Connecticut laws have not changed. Companies have various models, and it’s up to the state, it’s up to the legislature to determine whether or not we want to adapt to some of those changes that are out there.”

Tesla, one of the country’s largest manufacturers of electric cars, has strongly lobbied for the bill since the previous legislative session. Duff said the company has been “at the forefront” of the process with its “aggressive” efforts to persuade legislators.

A Tesla representative said his company plans to expand in the state as soon as the legislation becomes law, promising to bring high-paying, modern jobs.

“Tesla is looking to invest in Connecticut,” said Jim Chen, Tesla’s vice president of regulatory affairs. “With each store, with each location, that’s an investment of $7 to $10 million per location with anywhere from a dozen to two dozen jobs for Connecticut residents. In addition, the sales activity will account for $1.68 million in annual sales tax revenue.”

Chen said there are now about 1,000 Tesla vehicles in Connecticut. According to Tesla’s website, the state’s only service facility for the vehicles is located in Milford. There are five public, company-owned supercharger stations, four of which are located along Interstate 95 in the southwestern portion of the state.

Tesla’s website shows the company plans to open its first Connecticut store in Greenwich should the legislation pass.

Duff said the Senate did not consider the legislation last year because the House passed the bill late in the session. He also said he has not caucused to see how much support the bill would have in the Senate this year. However, he said he believes the bill is a reasonable compromise that would promote competition while continuing to protect consumers.

Car dealers in Connecticut oppose the legislation. They want Tesla vehicles sold through third-party dealers, as is the case with other cars, including electric models.

In an op-ed published by the Hartford Courant last February, Jim Fleming, president of the Connecticut Automotive Retailers Association, said consumers could be harmed if the legislation is passed and Tesla should close its doors.

“Should Tesla fold tomorrow, there will be a few hundred disappointed people in Connecticut, but the owners of most of these cars are among the wealthiest 1 percent, and this is typically their third or fourth car,” Fleming wrote. “However, if Tesla grows as the company predicts, and it offers a less pricey car, then five years from now, many more people may own its cars. Then, should Tesla fold, there will be significant damage to the car owners.”

Rep. Tony Guerrera, D-Rocky Hill, who joined Duff at the press conference, said there has been an “outcry” of support for the legislation in public hearings. He said he wants Connecticut residents to be able to purchase electric vehicles in state rather than having to cross into Massachusetts or New York.