Stamford – In the first of a series of open-ended town hall meetings, Gov. Dannel P. Malloy stood his ground Thursday on his intention to make deep spending cuts. But the governor did so in a tone more plaintive than combative, suggesting in his sixth year in office he was humbled by fiscal challenges.

The audience eventually would send him home with applause, an uncertain prospect at the start of an evening that produced nearly unbroken complaints about what his budget would cost Connecticut in terms of services and quality of life.

Everyone was polite, if pointed. A non-profit agency, Kids in Crisis, pushed back hard at the steep loss of revenue it faces with complaints from a foster parent, Brina Rodriguez, who called the agency invaluable and a little girl, Sami Goldman, who asked in a high-pitched voice if he wanted to do “the right thing.”

“You’re only hurting the kids,” said Goldman, standing with her friend, Annabelle Elkin, both aged 10. “These kids are scared and lonely.”

Malloy told them that the state discontinued funding for Kids in Crisis as a matter of policy. One of the agency’s services is shelter beds, and the state is now relying more heavily on relatives when removing children from parents, a policy change urged by a court monitor of the Department of Children and Families.

“That’s the answer,” Malloy said. “And quite frankly, it’s a pretty good answer.”

One questioner, Carolyn Goldenberg, told him she suspected that taxes would go up after the 2016 election, when all 187 seats in the General Assembly are up, further damaging the business climate. Malloy, mid-way through a four-year term, will not be on the ballot.

“How are you going to create a business climate that provides certainty and stability, eliminates high energy costs and reduces the cost of regulatory burdens of doing business in Connecticut so that we can grow our economy without incentives and giveaways that come out of our pocket?” she asked.

Her question was applauded.

Malloy defended his administration’s economic development policies, including the grants and low-interest loans it has given employers who have moved to the state, such NBC Sports, now located in Stamford with about 1,000 jobs.

Questioners handed in slips of papers with their names and a topic of interest. The names were picked at random, according to a spokesman, and called to a microphone by Lt. Gov. Nancy Wyman.

Most began their question with a compliment, but they quickly got to the ask: Could Malloy possibly find money for just one thing? And, aside from Kids in Crisis, nearly everyone’s one thing was different. 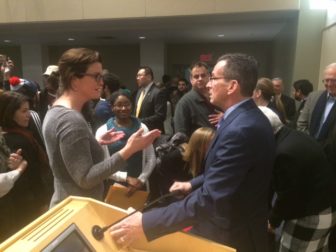 He heard people who came to see if a few more dollars might be added for libraries, for the University of Connecticut, for community health services, for at-risk children, for affordable housing, for school construction.

Twice, Malloy held up his hands, stepped forward and said he understood their pleas, but they must understand his problem: The economy cannot support all the services state government now provides. Twice, he asked the same question, generating a mix of laughter, nervous titters and blank stares.

“Everyone who wants their taxes raised, raise your hand,” Malloy said, glancing around an audience of about 250 people at the University of Connecticut branch campus. He thought he detected one, maybe two people.

Malloy, a Democrat in the second year of what promises to be a second term of fiscal challenges, said he does not believe Connecticut is able or willing to pay higher taxes, not after major increases in the first year of both terms. Left unsaid was the national beating Connecticut took when General Electric chose to leave the state for Boston, another high-cost locale.

In starker terms than employed in the State of the State address last week, when he outlined a rationale for a budget that recognizes slow growth may be with the state for the foreseeable future, Malloy said Connecticut’s tax structure must stay competitive with nearby states.

A woman named Jennifer did not get far suggesting that the wealthy, whose top income tax rate is lower in Connecticut than in New York, pay a little more.

“We are the wealthiest state in the nation,” she said. “Why are you not asking millionaires and billionaires to sacrifice a little more…instead of cutting services, laying off workers and other destructive proposals that you are pushing?”

“I’m not pushing anything, except reality,” Malloy replied. “We have raised taxes on our citizenry. And I think we’re at a point where we will be at a competitive disadvantage if we continue that practice, which is a way of saying it would be far more destructive to our long-term growth potential in the state of Connecticut if we go back to the well too often.”

Malloy said the state is competing with northern New Jersey and Westchester County to lure jobs from New York City, a dynamic in the growth of Stamford and other communities in lower Fairfield County that are more oriented toward Manhattan than Hartford.

“Part of that competition is on what individual taxes are or what the corporate tax rate is,” he said.

Malloy, who describes his own personality as prickly, was composed throughout the evening. When he pushed back, he kept his voice even. He stood to side of the podium, listening to questions that spun into mini-speeches. Mostly, he stood deep in a U-shaped arrangement of chairs, close to his interrogators.

“I just asked a room full of reasonable people, ‘Who is prepared, you know, to pay more money?’ I remember I got one hand, right?” he said, pausing as a few in the crowd laughed. “What I think the issue is, is finding the right balance.”

The governor is going back out on the road at a time when the last Quinnipiac poll of Connecticut residents found the state with a dim view of his job as governor, especially on matters of the economy and budget. His first stop was Stamford, the city he governed as mayor for 14 years, stepping down in 2009, knowing he was running for governor in 2010.

Malloy promised that his difficult budget proposal was not the result of indifference. He said he’s worked hard, looking for options – and reminded them he’s already raised taxes, even if critics believe the rich can pay more.

“I mean, I live it every day. I read more reports. I go over more information. I review more economic data,” he said, then ticked off a list of indicators of a weak economy. “These aren’t good signs, and we are going to have to make some level of sacrifice together. And unfortunately, it falls on me to put out a budget and also falls on the legislature to pass a budget. I’m honestly doing the best I can.”

Malloy stood in the same auditorium five years ago on the ninth stop of a 17-stop tour to defend and sell his first budget, which included more than $1.5 billion in taxes to help close an inherited deficit more than twice that.

The crowd was bigger in 2011, spilling over into a balcony that can hold another 100 people, and it included old friends who came to banter with a confident Stamford native just two months deep into his tenure as governor.

“It was fun,” he said then. “I got to see a whole bunch of people. It was fun to see people. Any time I get to be in Stamford, it’s a pretty good day.”

Five years ago, he left to a standing ovation.

On Thursday he was applauded, if with less enthusiasm. A few of the people who challenged him waited to pose for a picture. He accommodated them all, crouching low for a picture with Sami Goldman and Annabelle Elkin.