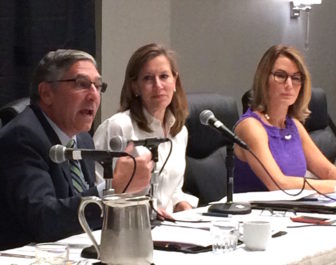 State legislative leaders may have offered a preview Tuesday of this fall’s election themes as they battled before the leaders of Connecticut’s small towns.

Speaking at the Council of Small Towns’ annual meeting in Rocky Hill, Democratic leaders struggled with a somewhat mixed message: Promised sales tax revenues would be shared with communities despite looming budget deficits, yet municipalities also must be prepare for lean times.

Republican lawmakers hammered away at the contrasting messages and warned Connecticut was headed for fiscal chaos unless state government is fundamentally restructured and made smaller.

“We are committed to the budget that we produced last year,” House Speaker J. Brendan Sharkey, D-Hamden, said. “There is absolutely no stomach on our part, or the governor’s part … to change that.”

But despite Sharkey’s claim about Gov. Dannel P. Malloy, the Democratic governor’s new budget calls for legislators to reduce “discretionary spending” — a category that Malloy defines to include non-education aid to towns — by the 2017-18 fiscal year.

But can cities and towns really expect that program to last when nonpartisan analysts project deficits topping $500 million in 2016-17 and $1.7 billion in 2017-18?

Further complicating matters, Malloy and legislators from both parties say tax increases will not be considered, at least in the immediate future.

The Capitol faced a strong backlash from the business community last June after Democratic legislators and Malloy approved tax hikes worth $1.3 billion over this fiscal year and next combined. The governor had pledged not to raise taxes during his 2014 campaign for re-election.

Klarides and Senate Minority Leader Len Fasano, R-North Haven, argued that unless Democrats immediately seek to restructure government — including seeking concessions from state employee unions — it has no chance to stabilize state finances and keep its promises after the election.

“We don’t trust the words that come out (of the legislature), and I don’t think you do either,” Klarides told about 100 first selectman and other municipal leaders gathered at The Sheraton Hartford South in Rocky Hill. “… If we don’t have a plan to change how state government works, it will never come.”

“The problem is state government never holds up to its responsibilities,” Fasano said, rejecting Democrats’ new assertion that Connecticut has entered into a “new economic reality.” 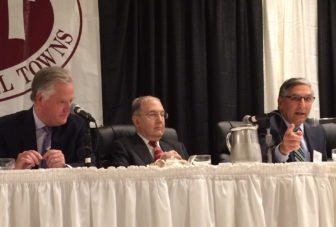 “It’s not a new world,” Fasano said, noting that the state has struggled with budget deficits and under-performing revenues for much of the past five years. “It’s only a new world if you’ve just taken the blinders off.”

Municipal leaders pressed not only for assurances that the revenue-sharing program would proceed as planned, but also that lawmakers would reconsider a municipal spending cap tied to it.

That cap reduces a community’s share of sales tax receipts if the city or town increases spending by more than 2.5 percent in the year it receives the funds.

“Why are you telling us what’s best for us?” said Roxbury First Selectman Barbara Henry.

Sharkey told local officials that the cap “was not meant to be a dictatorial mandate,” adding that legislators are willing to discuss adjustments. “We can talk about how that works and plays out.”

But both Democratic leaders also told town officials to brace for lean budgets, regionalization of services and other cost-cutting moves.

“This is the moment,” when Connecticut must stop discussing these options and begin to implement them, Sharkey said.

“Difficult choices are going to have to be made on all sides,” Looney said.