A new approach to prepping women to leave prison 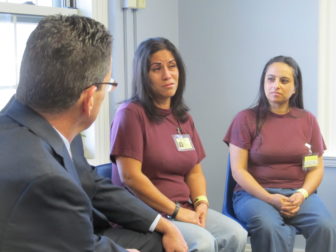 East Lyme — Until three weeks ago, 90 percent of Amy Gully’s daily routine in York Correctional, the state’s only prison for women, was staying in a cell, marking days off a 30-month sentence for embezzlement and waiting her turn to make a phone call home.

“Today, I am up every morning. I am downstairs teaching. I know how to do computers and typing and things like that, and the girls just don’t know how to do that,” Gully said Wednesday after a chat with a visiting VIP. “I have responsibilities, and I’m starting to feel useful.”

The visitor was Gov. Dannel P. Malloy, making his sixth prison visit in the past nine months. This time, he was marking the dedication of York’s new community reintegration center, a program to prepare women to return home from prison.

Related links
A governor, a commissioner and a new take on prison
Finding a Second Chance

“What we want to do is make sure you don’t come back,” Malloy told Gully and five other inmates, who sat in a circle with their warden, counselor and Correction Commissioner Scott Semple. “And we like you, but we don’t want you to come back here.”

Malloy, who has won passage of sentencing reforms as part of what he calls his “Second Chance Society” initiative, said recidivism rates for women have stayed steady, while dropping for men. The hope is the community reintegration center opened Feb. 1 in a tired brick building on the York campus will help women find success once they get home.

A reintegration center for men opened last year in Somers and already has expanded to include a veterans unit, and soon will expand again for inmates convicted of driving under the influence. The women’s center is packed with programs and counseling, much of it group sessions. Inmates apply for admission for one of 68 slots. All but 12 are taken.

It was just for a few days after an arrest for evading responsibility with a motor vehicle, but it gave her an inmate number starting with 149, which marks her as someone who first entered the system in 1985. She is 49 now, a wife and mother on her fourth trip to York, a pattern of self-destructive behavior Gully is trying to understand. 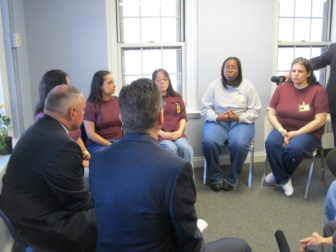 “I have a 149 number. I’m not proud of it, but I do. And there is something that keeps bringing me back here, and that’s because I don’t think I deserve anything better,” Gully told Malloy, speaking in a rush. “I’m here to break that chain, break that circle. I made mistakes, but that does not make me a bad person. It makes me somebody who made a mistake, who did something bad and needs to get over it and figure out how not to do it again.”

No one spoke when Gully fell silent. Finally, the governor smiled and said, “I can agree with that.”

“Thank God, you’re in the right place then,” Gully replied.

Semple asked the women how many had children. Five of six raised their hands. The exception was Damaris Vega Torres, 43, who is serving five years for assault.

“I’ve been here for three years and six months. I should be going home, if God permit it, the end of this year. This is a great group,” Torres said. “I’m a little nervous, I apologize.”

Torres said this was the first time she had spoken at an event like this.

“I remember the first time I came to York,” Malloy said. “I was a little nervous.”

Semple asked the women how the center is different from the rest of York: “Do you feel a different vibe here, compared to where you were?”

Gully was quick to reply.

“It was just punitive, just, you know, lock up. Don’t do anything. That was it. That was how I was going to spend my time, I thought, waiting for my EOS,” she said, using prison slang for “end of sentence.”

Gully said the center quickly has become a community, where expectations are high.

“You can’t run and hide. Or break appointments. Or pretend that you’re OK. Or tell your therapist, ‘No, no, everything’s good,’ while you’re home in a puddle crying,” Gully said. “This is making you face things. And, thankfully, we have 24-hour staff just for that, and we have the backup.”

Another woman told Malloy the inmates still need a more understanding community to which they can return, a place that won’t view them as “discarded trash.”

“That’s the hardest part of what I’m trying to do, to get the broader society more invested in your success,” Malloy replied. “We were a much more accepting society 50 year ago.”

Semple has said attitudes also need to change in prison, where staff too often only see inmates as failures, not people who need help on the way home. Gully said later the correction officers assigned to the center are getting there.

“Some of the COs are starting to treat us as people, and not just as numbers and inmates. Some still have to learn that, but I think that’s what we’re here for, is to try to figure out how to teach each other,” Gully said. “If I can teach somebody how not to do this, and not be 49, and not lose custody of your kids, and not wake up every morning hating yourself and trying to figure out what you’re going to do now, that’s probably what I’m here for.”

Before prison, she woke each day waiting to see if this would be the day her husband hit her. In 15 years of marriage, he’s never struck her, but her previous relationships were abusive, Gully said. She is trying to unravel how she fell into such relationships – and why she sabotages herself when things are going well.

“I wasn’t supposed to mess up. I was supposed to be smart and a lawyer. And that’s not what happened,” Gully said. “I come from a family of cops, and I’m the one breaking the law.”