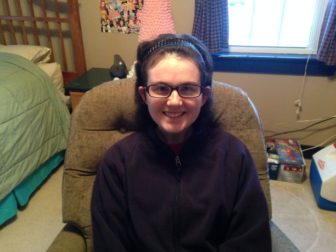 The phone call in September gave Carol Albert some hope: After years on a waiting list, her daughter Casey seemed poised to get a spot in a state program for people with brain injuries.

That would allow Casey, 23, to move into an apartment and have aides who could help address her needs. It would take some responsibility off Albert, who frequently misses work because of her daughter’s needs and monitors Casey nearly constantly the rest of the time. And it couldn’t come soon enough: Casey’s mental and physical health are deteriorating, her mother said.

But after getting her daughter’s paperwork and plans in order, Albert said she was told by the state Department of Social Services that Casey wasn’t coming off the waiting list yet.

Although the program had a waiting list of 25 people as of Jan. 28 and 13 open slots, department officials say they don’t have the money or staff to serve 13 more people.

Waiting lists are not uncommon in programs like the one the Alberts are waiting for, known as Medicaid waivers. But advocates have questioned whether the state is violating the terms of the brain injury waiver by not filling open slots, and one advocate has asked the federal government to intercede and force the state to fill them.

The state’s Office of Protection and Advocacy for Persons with Disabilities has also raised concerns about people on the waiting list going unserved – particularly since there are another 98 slots that have been reserved for, but so far unfilled by, people already receiving other publicly funded services.

“It can mean that caregivers have to quit jobs so that they can provide services. It means that people are usually not getting the services that they need and that they are entitled to,” Alisberg said.

Officials at the Department of Social Services say the state is not obligated to fill all the slots. Still, they say they could begin filling one per month – if they have the money and get approval to outsource care management responsibilities in the program, something legislators rejected in December.

The dispute comes as Gov. Dannel P. Malloy’s administration seeks deep cuts from state human service agencies to address a projected $570 million budget deficit and what officials characterize as an economy that can’t support the type of state spending Connecticut has historically had.

Albert sees her daughter’s care as a casualty of the state’s tight budget: If the department doesn’t fill the program, she said, there will be extra money to address the funding shortfall.

“In the meantime, I’m struggling,” said Albert, who lives in Columbia and whose daughter has had a brain injury since age 5, the year after Albert’s husband died. She said she told DSS officials, “I’m either going to end up institutionalized or my daughter will, because this is becoming way too much for me.”

The handling of the state’s program for people with brain injuries has been a major source of contention in recent years.

The program is a Medicaid waiver – an add-on to the Medicaid program that allows the state to cover people with specific needs who might not otherwise qualify. The federal government reimburses the state for a portion of the program’s costs.

While Medicaid is an entitlement, meaning the state must grant coverage to anyone who meets eligibility rules, states can limit the number of people served by Medicaid waivers. The waiver Casey Albert is wait listed for, for example, has 180 slots this year.

But whether the terms of the brain injury waiver allow the state to leave some of those slots unfilled has become one of the latest points of dispute between state officials and critics of the way they’re handling the program.

The state actually has two waivers for people with acquired brain injuries, intended to help them live in the community.

In 2014, DSS proposed a change: closing the existing brain injury waiver to new clients and creating a new one that could serve those whose services were paid for by DMHAS, allowing the state to get millions of federal dollars toward their care. It would also allow people in nursing homes to move into the community and cut down on the waiver’s waiving list, officials said at the time.

Many people with brain injuries and advocates opposed the plan, worried that it could jeopardize the original waiver, which must meet certain cost requirements under federal rules. And since many slots in the new waiver would be reserved for those already receiving services, critics charged that people already getting help would be taking spaces that could go to those who had been waiting.

Still, the plan moved forward. This year, the new waiver has 180 slots, 139 of which are reserved for people who had been in nursing homes or receiving DMHAS-funded services. Currently, 41 of those 139 slots are filled, according to DSS.

Of the 41 slots available to people like Casey Albert who are not in a nursing home or receiving DMHAS-funded services, 13 remain open.

By not filling those 13 slots, says Elaine Burns, president of the Connecticut Brain Injury Support Network, the state has violated the terms of the waiver.

“We can’t find the authority for them to manage it in this manner,” she said. “It’s crucial that at least those 13 people get services. They’re just languishing.”

State officials have said there isn’t money or staffing to fill the 13 slots – and they say DSS isn’t obligated to make all the waiver slots available.

Social Services Commissioner Roderick L. Bremby wrote to Burns in December that funding for the new waiver depends on attrition from the original waiver. When the new waiver’s budget was developed, he wrote, it was assumed that approximately 13 people would leave the old waiver each year.

And Bremby and Benjamin Barnes, Malloy’s budget director, wrote to Burns last month that while Medicaid waiver documents list the maximum number of people who will be served at a time, “capacity to fill any and all waiver slots is dependent on sufficient appropriation of the state share of funds for such slots.”

They pointed to two other Medicaid waivers – one serving people with developmental disabilities and one, known as the Katie Beckett waiver, that serves children with severe disabilities – for which the number of people served is based on how much funding has been budgeted, not the number of slots allowed under the waiver.

Burns has questioned both points. The documents for the two other waivers include language allowing the state to limit the number of participants to fewer than the maximum number of slots, while the acquired brain injury waiver does not, she said. And Burns said nothing in the new brain injury waiver indicates that its funding depends on attrition from the old waiver.

Asked to point to the authority the state has to not fill all waiver slots, DSS spokesman David Dearborn said, “A waiver is a permissive document and is not an entitlement.”

As for the reserved slots, DSS officials said in a fact sheet dated Feb. 3 that since they are meant for people whose services are already publicly funded, reducing the number of reserved slots wouldn’t free up funding to serve people on the waiting list.

Still, that fact sheet indicated that the department could serve one new client per month through the new waiver – “dependent on budget availability” and upon approval of a plan to contract care management services to an outside agency.

The latter part refers to a proposal by the department to outsource care management in the program. Officials say it’s necessary because the workload of DSS social workers has increased dramatically, and competing obligations with other work have made the social workers unable to perform annual reassessments of the program on a timely basis, as federal law requires. The department says it can’t hire more social workers because of a hiring freeze and other budget constraints.

But legislators on the Human Services and Appropriations Committees – many of whom cited concerns about the process involved – rejected DSS’ proposal in December. The department plans to seek approval again.

Burns questioned the idea of linking the department’s ability to fill slots to approval for the care management contract. She questioned whether staff were really as stretched as the department has said, and said that staffing shortages and a hiring freeze are within the ability of the administration to correct.

At a time of budget-cutting, would DSS have the funds to serve people on the waiting list, even if the care management plan were approved?

Once the department has a contract in place to outsource the care management, Dearborn said, “We are optimistic that funding will be available in current and future appropriations to support our proposal to add one person per month” through the end of the year.