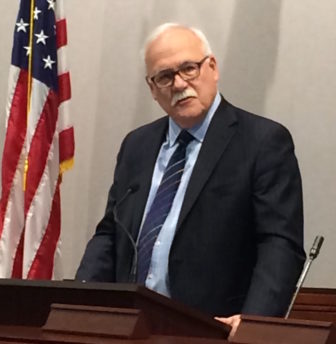 Connecticut’s businesses delivered the first of a promised series of blueprints Wednesday to cut state spending over the long haul.

The Connecticut Regional Institute for the 21st Century offered several proposals to accelerate the ongoing shift of the elderly from institutional care into home- and community-based health care. And while the Connecticut Economic Resource Center — which prepared the institute’s report — estimated the state could save $657 million annually by 2025, it also said legislators could speed up this timetable.

“We will give them any help they need” to control spending, Peter Gioia, senior economist for the Connecticut Business and Industry Association and a member of the institute’s steering committee, said. “But we are going to push this hard.”

The CBIA and the state’s eight major chambers of commerce wrote to Gov. Dannel P. Malloy last week calling for a bipartisan effort to curb state spending — and pledging to help in the process.

Composed largely of regional business groups and corporations, the institute commissioned six studies in 2010 and 2011 to reduce state government spending with a focus on long-term savings.

Besides health care, other topics past studies addressed included:

After Malloy and the legislature enacted a two-year budget last June that increased taxes $1.3 billion over the biennium, the institute retained CERC to revisit those plans.

Some of these studies will be updated, while others need little adjustment, Gioia said. But business leaders will work this spring to reacquaint legislators with all of them.

“This stuff has got to get done,” he said.

Back in 2010, the institute estimated that Connecticut could reduce long-term health care costs by about $900 million per year by 2025.

Roughly 53 percent of those receiving long-term care at that time were being treated in their homes or other community settings, as opposed to nursing homes and other institutions. The projected savings hinged on the state’s meeting a goal of pushing that ratio up to 75 percent by 2025.

The resource center, a nonprofit economic development think-tank supported by public and private funds, reported Wednesday that Connecticut already has made major strides and has increased the ratio to about 60 percent.

And while the report doesn’t specify just how quickly Connecticut might be able to accelerate its timetable, it recommended six new steps to move things along.

The first is to establish a long-term support services coordinator to reduce duplication of services.

Connecticut offers long-term care support services through at least 10 different departments or agencies. “It is time in the state of Connecticut to get out of our silos,” Shelly Saczynski, chairwoman of the CERC Board of Directors, said.

Connecticut also might have to spend money to save money.

For example, the report calls for broader state and local planning. This means the state and communities may need to provide public services to accommodate more elderly living outside of institutions, Santy said. That also could mean changing zoning laws.

“Clearly we do need additional workers to provide the care,” Saczynski said, adding that institutional employees also will need retraining in some cases to find work in home- and community-based care.

Families and even the hospitals and physicians they consult with may not be fully aware of all of the care program options available, particularly as they expand, he said.

Other new recommendations include:

The state’s largest coalition of nursing homes cautioned against misunderstanding the role of home-based care versus that received in an institution.

“It’s not one or the other, it’s both” said Matthew V. Barrett, executive vice president of Connecticut Association of Health Care Facilities. He added that Connecticut has one of the oldest and fastest-growing aging populations, particularly in the older-than-80 category.

Though past legislatures have been slow to embrace major restructuring of government services, two moderate House Democrats, Mary Mushinsky of Wallingford and Jonathan Steinberg of Westport, predicted the Democrat-controlled General Assembly would pay closer attention to the institute’s report this time around.

“We need a call to action that it must happen today,” said Steinberg.

The Westport lawmaker, who joined Mushinksy in attending the institute’s press conference Wednesday in the Legislative Office Building, predicted that at least a dozen House Democrats already are prepared to assess these cost-cutting blueprints from businesses, adding he expects that number to grow as the legislative session continues.

“The budget needs it,” Mushinsky said, referring to projected deficits topping $500 million next fiscal year, and $1.7 billion in 2017-18. “We just have to systematically break down any obstacles to looking at these recommendations.”