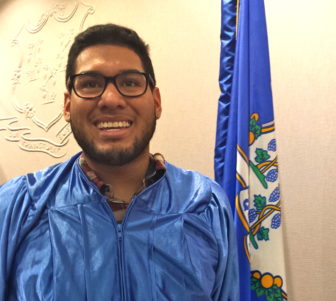 Erik Muñoz can’t go to college because he can’t find anyone to loan him the money, and he doesn’t qualify for financial aid.

Muñoz, who was brought from Ecuador to New Haven when he was in grade school, is an undocumented immigrant.

“Where I used to live, there were drugs, guns, and my friends were all joining gangs,” he said of the life he left behind. “I escaped from that to move here for opportunity.”

But that opportunity diminished after high school.

With the cost to attend a public college in Connecticut topping $10,000 a year – and scholarships and financial aid unavailable to undocumented residents – Muñoz is working minimum wage service jobs.

A bill before the legislature would change that.

Students, religious leaders, undocumented immigrants and college officials, including Mark Ojakian, president of the Connecticut State Colleges & Universities system, testified in support of the legislation during the committee’s public hearing Tuesday. No one spoke against it.

The CSCU system, which includes the four state regional universities, the 12 community colleges and the online Charter Oak College, is already facing a loss of $26 million under Gov. Dannel Malloy’s proposed budget.

Ojakian said if state funding cuts reach a level that would result in the elimination of programs and access to the system’s universities, he would “have to revisit the conversation.”

In the meantime, he said, the “human costs” should outweigh any present financial concerns.

“The true injustice of this is because a portion of all tuition that students pay is dedicated towards institutional aid,” Ojakian said in his testimony. “Undocumented students are paying into a fund to which they have no access. These students are not asking for a handout, they are asking to access a service for which they are currently paying.” 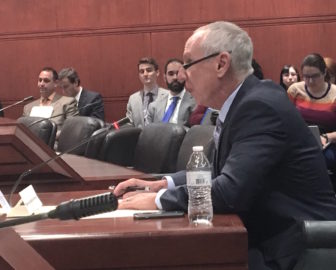 Ojakian said he does not believe there would be “an exorbitant cost” to implement the legislation beyond what it would take to create new forms for the aid application.

An expected increase in enrollment as a result of opening up institutional aid to undocumented students would help to offset some of the costs, Ojakian said.

The bill has the backing of Senate President Pro Tem Martin Looney, D-New Haven. “It’s the right thing to do,” he said during an interview. “They deserve a chance to go to college.”

Last year the Senate approved the bill along party lines, 21-12, but it was not brought up for a vote in the House.

Rep. Roland J. Lemar, D-New Haven, said during an interview earlier this month that the bill was never raised because Republicans were threatening to debate the bill for hours and run out the clock as the session neared its constitutional deadline to adjourn.

Undocumented students in recent years have won some limited victories to put college more within their reach. Last year, state law was changed so that undocumented students who attend high school in Connecticut for two years would qualify to pay in-state tuition. Immigrant children who were victims of labor abuses or sex trafficking also were made eligible for in-state tuition.

Ojakian said those victories give him hope that the financial aid legislation will pass as well.

University of Connecticut President Susan Herbst, in written testimony, supported the intent of the bill but expressed concern about its possible financial implications.

“We are aware that, if approved, the legislation will likely increase the financial demand for an already limited pool of existing funds available to students,” Herbst said in the statement. “In addition to supporting a revision to statute which would allow our institution to provide financial assistance to students impacted by the proposed legislation, we are interested in collaborating with the General Assembly to address the financial commitment that SB 147 would require.”

“This legislation is a very common sense, no-cost issue that should have already been implemented,” Wang said. “It’s only better for everyone in Connecticut if these students are getting the kind of education they need to contribute to the economy.”

“We have students at the university who pay into the system of financial aid and then aren’t able to access that money,” Byrd said. “We think that’s inherently unfair and unjust.”