But the governor already has acknowledged the trend and has warned that his administration is exploring further cost-cutting options, including reducing the state’s workforce.

“I cautioned last month that I was concerned with the potential for further erosion in the consensus revenue forecast,” Lembo said. “Economic data now supports a downward adjustment in that forecast. This projected deficit, now exceeding 1 percent of the state budget … should prompt renewed collaborative mitigation efforts.”

While the payroll withholding potion of the income tax continues to show moderate growth, quarterly filings — which represent about 40 percent of total income tax receipts and are largely influenced by stock market conditions — fell in January to 4 percent below the previous year’s collections, according to the comptroller.

“In nine of the past 11 fiscal years, final payments have moved in the same direction as estimated payments,” Lembo said. “This historical pattern raises serious concerns regarding April final payment receipts.”

Lembo’s $219.9 million deficit projection is similar to the $266 million shortfall that the legislature’s Office of Fiscal Analysis issued last week when it first reported the downward revenue trend.

Malloy’s budget agency, the Office of Policy and Management, repeated its warning Tuesday that state spending will face significant reductions.

“The new economic reality requires the state to not spend more than it has – households don’t budget based on what they want to have, but plan based on what they actually have,” OPM spokesman Gian-Carl Casa said. “State government will need to do the same, and OPM is considering options on how to best accomplish that goal.” 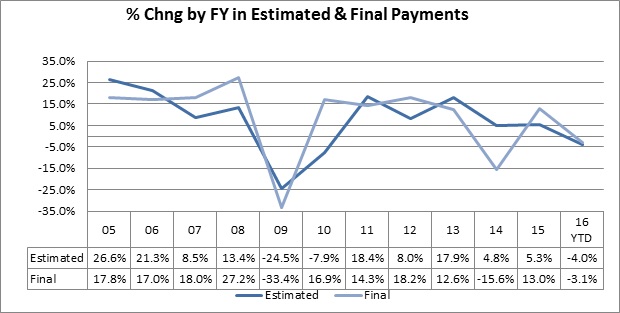 Office of the Comptroller

Quarterly state income tax filings – three estimated payments and one final installment – are declining. These payments reflect investment-related earnings and can be volatile.