Senate leader adds to calls for givebacks from state employees

The leader of the state Senate has joined the growing chorus of top state leaders calling for major givebacks from state employees to help close the state’s looming budget shortfalls.

Senate President Pro Tem Martin Looney, D-New Haven, said the state needs to find savings from labor akin to those gained in 2011 from the State Employees Bargaining Agent Coalition (SEBAC), which negotiates health and retirement benefits on behalf of the thousands of state employees. 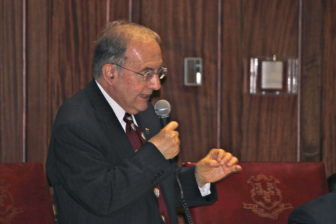 “In order to avoid just a very massive cuts in the budget this year and huge numbers of layoffs, to minimize or ameliorate that impact, it’s really going to be necessary to have that same kind of agreement again,” Looney told reporters after an unrelated press conference at the state Capitol complex. “If that doesn’t happen, that just means the pressure and pain in other parts of the budget will be even greater.”

Gov. Dannel P. Malloy, House Speaker J. Brendan Sharkey and the Republican leaders in the Senate and House have all urged seeking concessions from SEBAC.

Looney cited specific concessions he would like to see, including increasing co-payments for prescription drugs, removing overtime pay from pension calculations and eliminating annual longevity bonuses.

“I think the question of co-pays needs to be addressed. There should be some modest increases potentially in co-pays. Nothing that would be very punitive or excessive for people who have chronic conditions that they have to get drugs regularly for, but a modest increase in co-pays could save the state quite a bit of money without being extremely painful for the recipients,” he said.

The senator also wants givebacks that could help relieve the state’s long-term pension liabilities. Connecticut’s obligations exceed the assets in its pension funds for state employees and for teachers by $25.7 billion combined.

“Many of us would like to see some limitation or the phasing out of the option in certain categories of people who are able to increase their pensions by working a lot of  overtime the last couple years of their employment to have a pension that is based on something that is much greater than the base pay for their job. That is something that we should be looking at and negotiating out of existence,” Looney said.

He also targeted the elimination of longevity payments, annual payments employees receive based on how many years they have worked for the state. The labor concessions from 2011 ended these payments for all new state employees.

“I think that is an expense that cannot be justified in these difficult times,” he said.

The administration of Gov. Malloy, a Democrat, earlier this month wrote SEBAC asking that they reopen the contract to find savings from labor as the state grapples with a $900 million budget deficit in the fiscal year that begins July 1.

But the chief negotiator for the state employees has resisted those requests, so far. The negotiator, Hartford attorney Daniel Livingston, wrote to the administration that he could not open concessions talks without authorization from the various employee unions.