The Board of Regents is seeking cost savings from community college faculty and staff, whose response has been notably less confrontational than that of faculty at the regional Connecticut state universities when asked for givebacks last November. 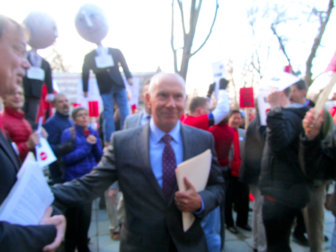 CSCU President Mark Ojakian works his way through a protest outside a meeting in December.

Faculty from Central, Eastern, Southern and Western Connecticut state universities held protests across the state in November and December over a proposed contract that a union leader said felt like an “attack on faculty.” Mark Ojakian, the president of the Board of Regents, which oversees the regional universities and community colleges, tried to distance himself from the conflict, pointing out he had only been on the job for a few days when the proposed contract was submitted and didn’t have a chance to provide his input. He declined, however, to reject the parts of the proposal faculty took issue with.

Missing from those protests were community college faculty and staff, who had not yet been presented with proposed contract changes. They learned during the first week of February what Ojakian wanted from them.

“As expected, the BOR proposals focused heavily on reducing costs and achieving savings,” the Congress of Connecticut Community Colleges, known as The 4Cs, wrote their union members at the time.

According to the union, the proposal includes eliminating annual seniority bonuses; eliminating wage or step increases for three years; eliminating pay increases for other job duties, such as coaching or tutoring; increasing the time new full-time faculty must spend working with students to 30 hours per week; and capping how much staff would be paid when they teach more courses then required.

In addition, mandatory office hours would increase to five hours per week, and the notice the system would have to give employees it seeks to layoff or reassign would be reduced to three months.

In the nearly two months since the proposals were made, there have been no protests or faculty outreach drives to the media or legislators have followed. In newsletters, union officials reported things were going well during negotiations with university officials.

“Our conversation was productive on these matters and progress was made,” a newsletter stated after a March 2 negotiating session.

“Our conversation has continued to be productive,” another newsletter reported after a March 14 negotiation session.

The union explains the reason the response has been more tame is because the proposals are more tame.

However, Ojakian did tell reporters earlier this week that negotiations have been stalled since Gov. Dannel P. Malloy two weeks ago asked the coalition that negotiates retirement and health benefits on behalf of all state employees, including those at colleges, to come to the table to discuss concessions.

Dozens of community college faculty and students are expected to come to the state Capitol today to meet with legislators for the annual Community College Lobby Day. In announcing the event, the union aimed its displeasure at Gov. Dannel P. Malloy and other legislative leaders who have called for savings from state employees to help close the state’s $900 million budget deficit next fiscal year.

While officials at the state’s public colleges are responsible for negotiating wage and working conditions with their employees’ unions  the executive branch negotiates health and retirement benefits for all state employees.

With the Democratic governor recommending cutting the college budgets by millions and Ojakian ruling out further tuition hikes to close a remaining deficit at the community colleges of at least $10.7 million, spending on labor would almost certainly have to be cut since it is by far the system’s largest cost.

The announcement of the Lobby Day also did not mention concerns about the working-condition changes that Ojakian has proposed.

“The fight now is not with BOR directly but with legislators from both parties who are following Malloy on his quest for public employee pay freezes, eroded pensions, less secure health care, budget cuts that disturb the already precarious lives of the working poor, the sick and elderly, and result in massive lay offs in critical human service, public safety, and other state agencies,” the union explains.