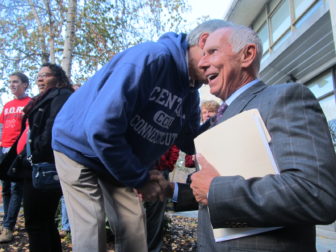 Peter Tercyak, chair of the legislature’s Labor Committee, talks with CSCU President Mark Ojakian before heading to the megaphone.

Weaving through a crowd of upset faculty and students rallying against proposed changes to working conditions on university campuses, Board of Regents President Mark Ojakian stopped for a quick chat with the speaker about to address the protesters next.

That speaker — the House chairman of the legislature’s Labor and Public Employees Committee — had a message for his longtime friend.

“I understand what it’s like to fight really hard with people you love. We’ll get through this,” Rep. Peter Tercyak told the president of the Connecticut State Colleges and Universities, the state’s 90,000-student public college system.

Tercyak then headed to the megaphone to address the 150 upset faculty and students holding up signs, like the one reading “Board of Regents has failed,” and life-size puppets mocking the leaders of the CSCU system.

“We’re in for a real fight here. Know you have friends,” the Democrat from New Britain told the rowdy crowd. “It’s nice to yell at system leadership as they go through the door. We should never miss that opportunity to yell at them…We need to empower them how to do their job better. This is how we do that. We need a bigger crowd next time.” 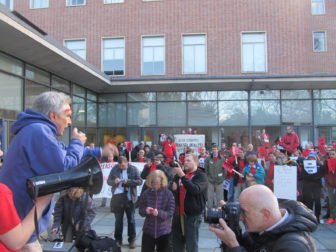 Rep. Peter Tercyak: “We’re in for a real fight here.”

Tercyak said during an interview his presence at the protest outside the regents’ monthly meeting should be a signal to the governing board and Ojakian that legislators are watching the contentious labor negotiations.

“Please dear God, let’s resolve this before it takes me to become an expert on every proposal being made here,” the community college graduate said. “Let’s hope we don’t have to get involved.”

Several other state legislators have attended other rallies at the regional Connecticut State Universities. 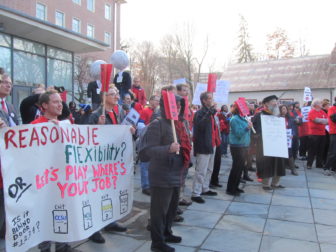 The drama stems from the changes college officials have proposed to the faculty union’s contract. The changes would allow college leaders to transfer tenured staff among campuses, would no longer allow counselors and librarians to earn tenure, and would make it easier to close programs and lay off tenured staff.

The changes drew harsh criticism from the national labor union that represents professors, calling them “draconian” in a statement read to the regents Thursday.

“We join their protest and urge the regents and Gov. Dannel Malloy to abandon these shameful proposals, which would bring to Connecticut [all] kinds of anti-education and anti-union measures,” leaders of the American Association of University Professors said.

Ojakian, the governor’s former chief of staff with a reputation for lowering the temperature in heated situations, responded that much of the drama is over misunderstanding of where he stands.

Addressing a packed audience at the regents’ meeting, he worked to clear things up. 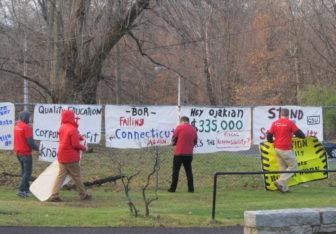 Protesters hang signs along the route regents will walk to get to their monthly meeting.

His remarks will soon be tested. His administration is expected to propose changes to the contract for faculty and staff at the community colleges in the next several weeks.

So far, the protests have been limited to Central, Eastern, Southern and Western Connecticut state universities.

“We are bracing. We don’t know if they will be as draconian as those proposed to our brothers and sisters at the state universities,” said Bryan Bonina, the president of the union that represents faculty at the 12 community colleges. “He said he is looking for a fair and flexible contract. Based on that, then we are expecting something less drastic.”

Tercyak hopes Ojakian is able to find peace with the staff and the protests don’t spread to the community colleges. 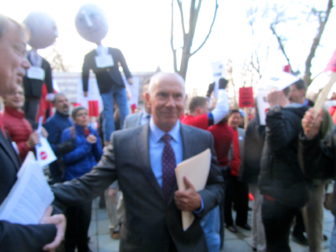 CSCU President Mark Ojakian works his way through the protest.

“He can be a real problem solver here, and if he’s not able to be, it will be the first time that’s been the case since I’ve known him,” he said of Ojakian, who he met in 1994 when Ojakian was working with Nancy Wyman’s campaign for comptroller.

Since then, the two have worked on several issues, including helping personal care attendants and child care workers unionize.

“I loved the rally today,” Ojakian said after Thursday’s meeting. “Families fight and then get along in the end.”

He is confident that will happen with the faculty and Tercyak.