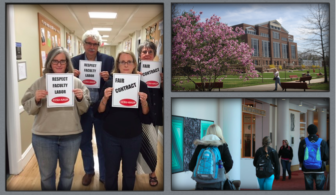 Leaders of the state’s largest public college system are asking for major concessions from its unionized teaching staff — a move a union leader says “feels like an attack on faculty.”

The Board of Regents for Higher Education, which operates the four regional Connecticut State Universities and dozen community colleges, proposes allowing them to use more part-time staff to teach courses, to increase the number of office hours faculty must hold, to make their personnel files subject to public release and to use available funding as one criterion for determining class sizes.

Research grants provided by the university would be eliminated under the proposal and tenured staff could be transferred to another regional university without their consent or guarantee of retaining their tenure. Annual bonuses based on years of service, known as longevity payments, would be eliminated. The children of unionized staff would also no longer be able to attend graduate school for free.

The details of the proposal have upset some faculty and drawn some national attention from the American Assocation of University Professors.

“I am shocked and bewildered by these proposals. We have never seen anything so harsh,” said Vijay Nair, the leader of the college system’s chapter of the American Assocation of University Professors. “It seems like an attack on faculty.”

In the union’s blog titled “A Democratic Scott Walker?” Hank Reichman, a leader at AAUP, asks what’s going on in Connecticut.

“The CSU Board of Regents has released bargaining proposals that amount to nothing less than a wholesale assault on the faculty in the true spirit of Scott Walker,” he wrote Tuesday, referring to the Republican Wisconsin governor who has infuriated unions during his tenure.

In Connecticut, the governor appoints the majority of the members on the board that governs the Connecticut State Colleges & Universities and gives final approval for the appointment of the system’s president.

The proposed contract does not address whether staff would receive raises in future years. In 2011, the administration of Gov. Dannel P. Malloy negotiated wages, retirement benefits and health care benefits on behalf of all state agencies and public colleges. His administration declined to disclose last week whether they would be seeking to negotiate wages or other benefits employees receive for the colleges this round.

A spokesman for the $1.2 billion college system declined to comment on how much officials hope to save through contract negotiations with its labor unions and why they are requesting certain items.

“It’s a subject of ongoing negotiations. It’s just a start. That’s what negotiations are all about,” said Michael Kozlowski.

Faculty will be meeting with their union leaders in the coming days to discuss the proposals.

“These are initials proposal and thus will not go unchallenged,” the Connecticut State University of the American Association of University Professors told its members in an email. “…many of the BOR’s opening positions are unprecedented in our bargaining history.”

A newsletter from the union that represents the teaching staff at the community colleges says the goal of the proposal is clear.

“It clear that the BOR is considering any and all cost saving possibilities at this point and is clearly attempting to weaken the union,” reads the newsletter from the Congress of Connecticut Community Colleges.